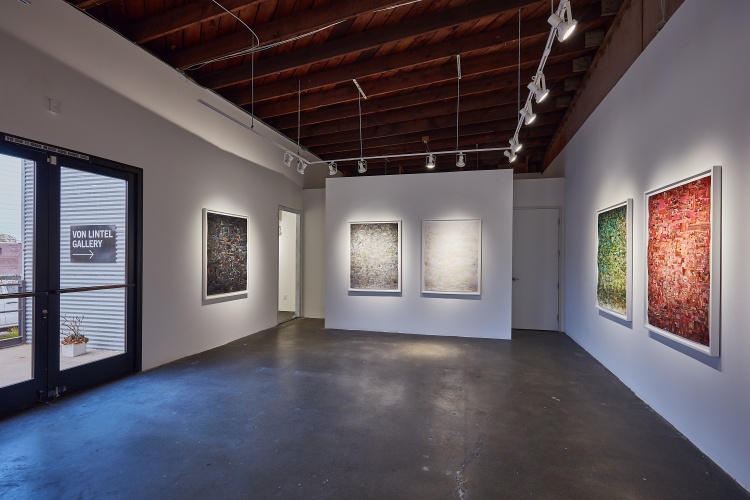 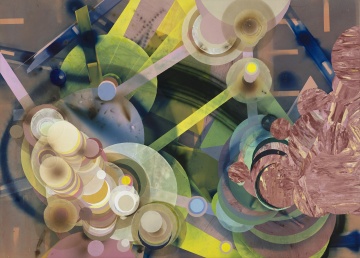 September 10, 2022 - November 5, 2022
Von Lintel Gallery is proud to present Skywriting, the fourth solo exhibition with the gallery by Rosemarie Fiore, Bronx based painter, sculptor, and performance artist. Over the last 22 years Fiore has continuously refined her unique Smoke Painting process, which makes use of the colored smoke contained in fireworks. To control and direct the smoke she has fabricated over 200 tools/sculptures, which range in size and complexity from a small hand-held tool to a giant 400 pound fork lift operated tool, which can hold 150 smoke bomb canisters controlled by a series of linked fuses. She uses these devices, as others would use paint brushes. They allow her to distribute the tinted smoke directly on paper, or more recently canvas. “Wobbles, spinning on and off, in and out of control are drawn with Fiore’s singular artist designed spirographic tools. These tools engage the entire body, or many people's bodies, to move from a fixed point. Building on the surrealistic technique of fumage as well as performance artists such as Carolee Schneeman who worked with the limits of the body and drawing, chance and chaos are tandem forces in Fiore's work. She responds to the physics of the tool she has created and the limits of the smoke bombs they contain- with tube or carton once ignited has a limited amount of pigment or painting ‘time’ within it. “ - Lindsey Landfried Rosemarie Fiore received her BA from the University of Virginia, Charlottesville and an MFA from The School of the Art Institute of Chicago. Solo and group exhibitions include: Weatherspoon Museum, Greensboro, NC; Lehman College Art Gallery, Bronx, NY; The Savannah College of Art & Design Museum of Art, Savannah, GA; The Bronx Museum, NY; The Queens Museum of Art, NY; MOCA, Jacksonvile, FL and The Franklin Institute of Science, Philadelphia, PA. Her work has been reviewed by publications including The New York Times, The Washington Post, Art in America, The Village Voice and New York Magazine to name a few. She is a recipient of a 2021 National Endowment for the Arts Grant through Penn State University. 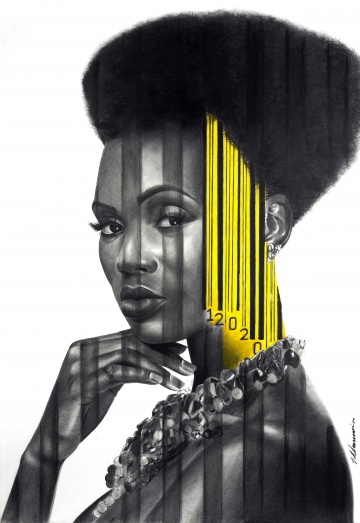 September 10, 2022 - November 5, 2022
Von Lintel Gallery is pleased to announce ‘Headlines’, the first solo exhibition of works on paper by Oluwatobi Adewumi. Adewumi is Nigerian born, but has lived in Arkansas since 2018. The culture shock of conservative America inspired Adewumi to use his art to give a voice to marginalized communities. Using graphite, charcoal, paint and collage his exquisitely crafted work depicts the resilience of Black women as they push back against trauma, sexism, inequality and racism. Adewumi states: “With every piece of art, I produce a story, an opportunity to provide history, a new voice, and perspective for my audience. I believe in using my artistic gift as a conduit to share the stories of people and places living in different societies and cultures with a new context. My practice engages in a critical commentary of the past to learn and unlearn how history shapes our understanding of the present and, in turn, impacts our perception of the future. I see and understand the world through people—their faces, expressions, and gazes allow me to represent the often- overlooked faces of Black African immigrants across the diaspora. Nigerian newspapers shaped my early knowledge about history and race, as well as stories from my great-grandparents. Those images were rich, powerful, and heroic. They embodied so much power while influencing how I see any black man or woman losing so much of their story, which must be investigated and how we are seen by the world today. Having so much rich culture and history but dismantled and kept away for a long time led me to create elegant iconic images that show the rich practices to tell the world about the future. My art takes on reconstructing the lost story, documenting the ideals of our history. Stereotypes and myths that have been created are challenged. I create a dialogue between the ideas of inclusion, culture, dignity, and consumption. And subjectivity by addressing the left-out cultures and traditions of any black race by challenging the history and untold stories, making space for the black race to tell the world about their story and history. “ Oluwatobi is a self-taught artist. He studied Computer Science at Olabisi Onabanjo University, Ogun State Nigeria and earned a B.Sc. degree in 2010. His work has been exhibited nationally and internationally since 2012. 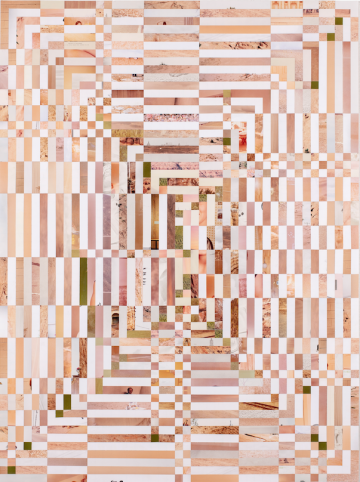 July 16, 2022 - August 15, 2022
Von Lintel Gallery is thrilled to present Lightwaves, which will mark the gallery’s third solo exhibition with the artist. The work, which will be exhibited in our project room, is a continuation of the photographic montages that Rudko is known for. Concurrently, an earlier work from this same series, will be featured at the Getty Museum in its third rotation of “In Dialogue”, a series of ongoing installations that present contemporary photographs from its permanent collection, in conversation with European paintings, decorative arts, and sculpture, from the museum’s permanent collection galleries. As in previous exhibitions, the work in this show is made from the collected vintage snapshots of friends, family, and a variety of internet vendors. The images are hand cut and organized according to color before they are assembled into new abstracted forms or pathways. The result never fails to pull the viewer in for a closer look. Rudko’s arranged visual puzzles seem to evoke common threads in our collective memories reaching into our pasts, as well as our present. “His work is anything but predictable, yet he calls upon familiar visual spaces in ways that offer a sense of stability. His capacity to find practical and emotional value in the process of art-making keeps him invested in finding novel ways to articulate ideas”. Bree Lamb for Adilletante. Joe Rudko lives and works in Seattle. He received his BFA in Photography and Drawing from the Western Washington University in Bellingham, WA in 2013. His work is in the permanent collection of The Getty Museum, Portland Art Museum, Tacoma Art Museum, the Museum of Fine Arts Houston and most recently in the Morgan Library & Museum in New York 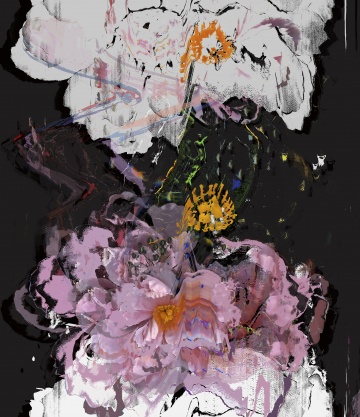 ELEGY OF THE GARDEN

June 11, 2022 - July 30, 2022
Von Lintel Gallery is delighted to present new work by artist Melanie Willhide. A pioneer of merging analog and digital photographic practices, Melanie Willhide has challenged conventional notions of photography for over fifteen years and broadened the very definition of the medium. Willhide’s new series, Elegy of the Garden, continues her life-project of photographic innovation while taking on her current subject—the environmental crisis—with an immediacy and emotional intensity that evokes witnessing a powerful storm and what it leaves. In Willhide’s work, what is left behind is always beautiful, even if only a memory. Willhide’s evolving and expansive process eschews “the decisive moment” to represent a broader feeling of time. She employs any tool her work demands. The flowers in this work—some real, some artificial—are captured with either a camera or scanner in such a way they exist as phenomena, dynamic as a hurricane or wildfire. Time does not stand still, and Willhide privileges texture and depth over realism. Plastic stems with nylon petals can be indistinguishable from flowers picked from the artist’s own garden, and the recognizable form morphs into pixelated abstraction. Willhide intertwines the natural world with the artificial, and we are moved to find where beauty survives in an era overcome by wind, water, and fire. Willhide’s concern with eco-grief reaches beyond her own art practice and recent landscape designs; she recognizes the environmental crisis as perhaps the gravest calamity in human history. Many of her flowers seem to be floating away or drowning in water that possesses a supernatural force, as seas continue to rise, drought and subsequent famine persist, and mega storms destroy communities and contaminate drinking water. Left behind is loss and the fear of further loss: a dream of untouchable color moving in unfathomable darkness. Willhide received her MFA from Yale University and has participated in solo and group exhibitions nationwide and internationally. Her work is included in permanent collections such as the Getty Museum, the George Eastman Museum, LACMA, the Yale University Davenport Collection. 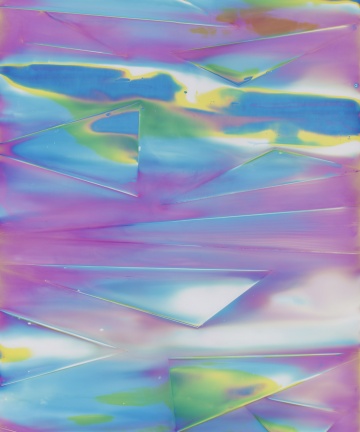 April 24, 2022 - June 4, 2022
Von Lintel Gallery is thrilled to present Rewind, an exhibition of vibrant chemigrams created by Cleveland-based artist Joseph Minek. This show will be displayed in the Project Room and will run from April 23rd until June 4th. Fascinated by the infinite possibilities of camera-less photography, Minek experiments with the foundational materials of photographic practice – light-sensitive paper and photo lab chemicals – to produce one-of-a-kind, chromatically exuberant images. His work delights in exploring the physical makeup of the photographic medium itself, rather than capturing any external reflection of reality, so he first exposes his high-gloss metallic paper to light – rendering it useless for its intended purpose. Strips of paper are then organized into compositions on its surface before he rolls, dips, squeegees, or sprays his prints with a variety of chemical compounds. The resulting works are infinitely varied and wildly luminous. Within a prismatic array of chartreuse, fuchsia, emerald, indigo, cyan, mustard seed, mauve, lavender, and blood orange, the overlapping pools and striations of the chemicals in the tray leave their traces not only in the explosive palette but in the intricate patterns and oil-slick parabolas, which the liquid traces and eventually settles on. Minek’s work has been exhibited consistently since 2010 and is held in public collections such as The Cleveland Museum of Art, The Rubell Family Collection in Miami, New York Presbyterian Hospital, and Bidwell Projects, Cleveland. 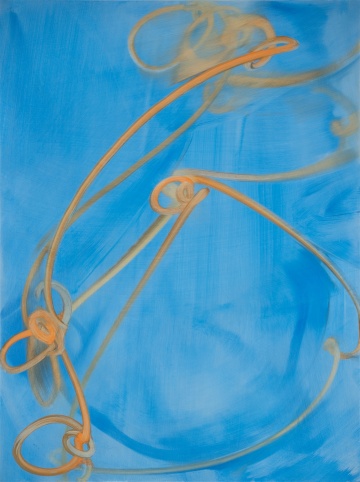 April 23, 2022 - June 4, 2022
Von Lintel Gallery is delighted to present new work by New York artist Mark Sheinkman, whose long association with the gallery spans almost 30 years and has translated into an incredible 15 solo shows. His latest exhibition will debut on April 23rd and be on display until June 4th. For over three decades, Sheinkman chose to limit his palette almost exclusively to densely layered compositions of graphite. Only in recent exhibitions has his focus shifted to color, resulting in multi-hued paintings, whose exuberant entwined figures express both spontaneity and a progressive reduction in form. His latest work features “all over'' fields of monochrome color, populated by single trails of knotted lines that glide languidly across the canvas. Comprised of finely gradated shades of light and dark and adjoined by echoes of pale color, these lines evoke a three-dimensional depth. Meanwhile, spiralling purple or blue-white trails of partially removed paint reel on and off the edges of the canvas, engendering in the viewer an intoxicating impression of otherworldly space. In his 2021 catalog essay, George Melrod notes that “Sheinkman’s works inspire multiple allusions. Over the years, they have suggested microscopic photographs of minerals, bones, proteins, tendrils, corals, coiling strands of DNA, or, ascending like Charles and Ray Eames’ Powers of Ten, everything from the darting trails of subatomic particles to maps of astronomical events. They are notable for their elusive scale; encountering them, a viewer might feel they’ve entered another realm, of physical forces beyond our human gauge.” Sheinkman is a New York based artist and received a B.A. from Princeton University. His work is included in permanent collections at home and abroad, such as MoMA, The Met, and The Whitney Museum of American Art in New York, Museum of Fine Arts in Houston, Museum of Prints and Drawings in Berlin, Germany, and Bibliothèque Nationale in Paris, France.