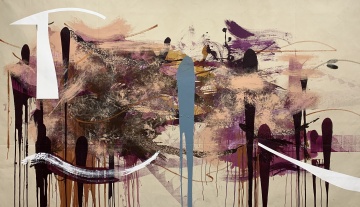 A Life in Halves

March 14, 2020 - April 25, 2020
Vielmetter Los Angeles is pleased to announce the gallery’s fourth solo exhibition with New York-based painter Elizabeth Neel. Life in Halves presents a new suite of large scale paintings on canvas and a group of works on paper that extend her interest in the externalization of physical and psychological experience via abstraction. Using a diverse vocabulary of mark-making tools, including fingers, rags, brushes, mono-printing techniques and rollers, Neel’s paintings are ripe with emotive lyricism suggestive of the correlative and repetitious cycles of daily life. 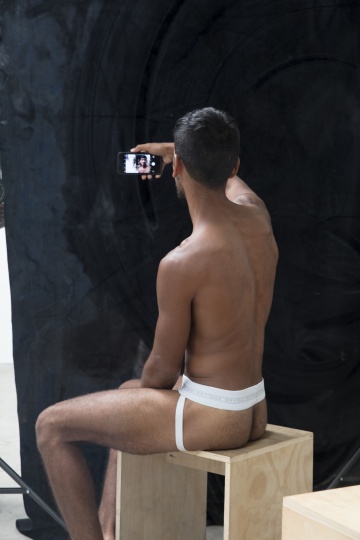 A conversation (about) around pictures

March 14, 2020 - April 25, 2020
Vielmetter Los Angeles is thrilled to announce our first solo exhibition with Los Angeles-based artist Paul Mpagi Sepuya, A conversation (about) around pictures. These new works, made in Sepuya’s Los Angeles studio between 2017 and early 2020 represent a subtle evolution of the artist’s thoughts about how pictures are made, seen, and circulated. In several of the works on view, multiple images of alternate points of view appear in the on screens of sitters' and collaborators' iPhones, reflected in the mirror that is the technical focus of all of Sepuya’s photographs. In others, the focus is on the space of the studio itself, rendered strange and indeterminate by multiple reflections and a proliferation of images in the form of test prints adhered to the wall, arranged on tables, or otherwise visible in the space of the image. Following his participation in the 2019 Whitney Biennial, where Sepuya included not only images made by his camera in his studio, but also images made by other artists in their cameras in his studio, several potential conversations around pictures emerge in this body of work. 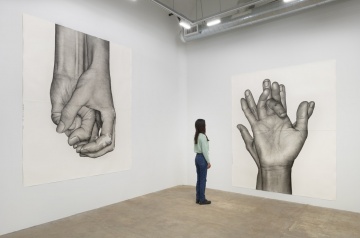 January 25, 2020 - March 7, 2020
Vielmetter Los Angeles is excited to announce Double Dominant, an exhibition of new drawings by Karl Haendel. This suite of 24 monumental drawings will be presented in two parts. Part one, made up the first twelve drawings, will open January 25 with a reception from 4- 7pm; part two, a re-hang of the show with twelve new drawings, will open on February 15, 2020. A volume reproducing the complete set of works, published by Triangle Books with an essay by Natilee Harren, will accompany the exhibition. 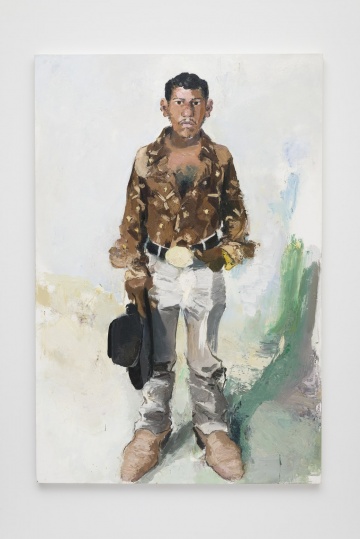 January 11, 2020 - February 22, 2020
Vielmetter Los Angeles is pleased to present the gallery’s first exhibition with Los Angeles based portrait painter John Sonsini. Comprised of full-length figures, bust portraits, and still lifes, the exhibition, Cowboy Stories & New Paintings, centers on the theme of cowboys living in Mid City Los Angeles. Emblematic of Sonsini's 50 yearlong practice, his all-male portraits oscillate between the intimacy of depicting a specific person's likeness and more generally addressing broad issues of gender mythology. In “Francisco”, we see the sitter exchanging his street clothes for the western clothing he's unpacked from a suitcase, thus witnessing the transition from the everyday to the performative. 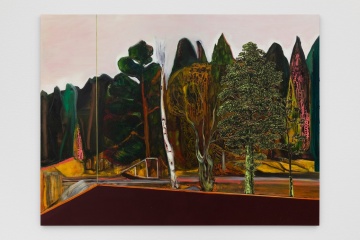 Reflections on the Anthropocene

January 11, 2020 - February 22, 2020
Vielmetter Los Angeles is thrilled to announce Reflections on the Anthropocene, a solo exhibition by Los Angeles-based artist Whitney Bedford. Reflecting upon how humans have chosen to record images of the natural world, Bedford's new landscapes draw upon an archive of historical landscape paintings to illustrate how images from the past underscore the dire reality of climate change and shifting ecosystems in the present.

The Tumult in the Heart

Wake the Town and Tell the People

I'm Sorry I Never Told You That You're Beautiful