Founded in 1954 by Donald and Peggy Vogel, Valley House Gallery & Sculpture Garden is a Modernist gallery and 4+ acre garden located in its original North Dallas location.  The gallery represents established and emerging contemporary artists working in inventive ways with traditional media.  In addition, the gallery offers 19th and 20th century American and European art, as well as significant Early Texas works.  The gallery has promoted artists internationally for over 60 years by curating exhibitions, showing in art fairs, publishing scholarly catalogs, and placing fine art in private and museum collections. 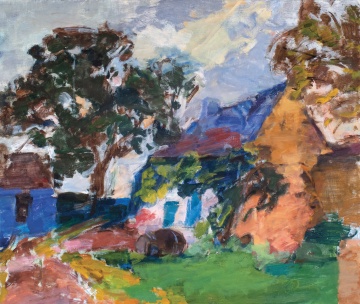 6616 Spring Valley Road
Dallas, TX 75254
March 21, 2020 - April 25, 2020
Valley House Gallery is honored to present a solo exhibition of recent paintings by Henry Finkelstein. About this body of work, he says: "Color, light and air, space and volume have always been at the core of my paintings. But increasingly I find that the character of the place itself is just as important to me. I’m drawn to old places, where people have lived a long time, where the land is considered, but not overly manicured, with ancient trees that frame some sort of gardening or farming. When I was in art school in the 1970s, I would not have admitted these things. Most of the discussion was limited to the abstract or formal elements of painting. So much has changed since then that such taboos have become irrelevant. This is liberating for me. My love for the subject doesn’t lessen my passion for the formal. It is always a synthesis of the two." A residency at Rochefort-en-Terre in Brittany, France, in 1992, and again in 2000, introduced Henry Finkelstein to this region where he returns each summer to paint from direct observation. Finkelstein earned his MFA in painting from Yale University School of Art in 1983, followed by a Fulbright Grant to study in Italy. In 1994, he was elected a National Academician. Finkelstein has taught painting and drawing in New York City since 1996. This is Henry Finkelstein's ninth solo exhibition at Valley House Gallery since 2002. Henry Finkelstein will give an Artist Talk on Saturday, March 21, at 11:00am. Join us for the Opening Reception on Saturday, March 21, 6:00-8:00pm. View the exhibition on the Valley House Gallery website at http://www.valleyhouse.com The exhibition will be on view Monday through Saturday, 10:00am to 5:00pm, from March 21 through April 25, 2020. Image: Henry Finkelstein, Cottage by the Road, 2019, oil on linen, 47 1/2 x 56 inches
Past Exhibitions 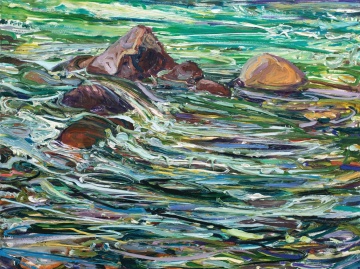 6616 Spring Valley Road
Dallas, TX 75254
February 1, 2020 - March 14, 2020
Valley House Gallery is honored to present our 10th solo exhibition of paintings by Lilian Garcia-Roig. About this body of work, she states: "This series of on-site paintings was made during the summer of 2019 on the banks of the Skykomish River in the foothills of the Cascades mountains in Washington State. As in my other plein-air works painted in forests, these paintings document a real-time process: the accumulation of fleeting moments experienced on site. Working with oil on canvas, the paintings are produced in a wet-on-wet, cumulative painting manner that was influenced by the watercolor and gouache works I made there in 2016. This summer was only the second time I have been able to spend an extended period working in oil on this singular, complex subject—the COLORS in water." Lilian Garcia-Roig was born in Havana, Cuba, reared in Houston, and lives in Tallahassee, where she is a Professor at Florida State University. She earned degrees at Southern Methodist University (BFA) and the University of Pennsylvania (MFA), and has been awarded a Joan Mitchell Foundation Grant, a Mid-America Arts Alliance/NEA Fellowship Award in Painting, a Skowhegan Residency, two Fellowships at The MacDowell Colony, a Kimbrough Award from the Dallas Museum of Art, and a State of Florida Individual Artist Fellowship.