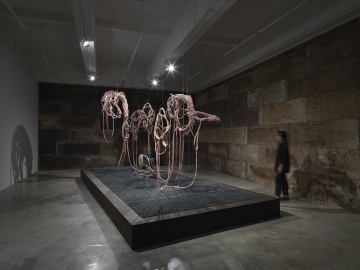 September 15, 2022 - October 22, 2022
For her first solo exhibition with Tina Kim Gallery, Mire Lee presents Carriers, the continental debut of her eponymous body of work shown at Art Sonje, Korea in 2020, and the Schinkel Pavillon in 2021. In the front gallery, a spectral video depicting Lee’s mother is projected onto a cast monolithic form, joined by a slippery curtain, and other grayscale sculptural casts, molded from functional objects that “carry” in their day-to-day utility. Deeper into the space, Lee’s quasi-biomorphic “carriers” hide suspended behind a filthy, maze-like wall of used concrete molds, spurting an unidentifiable fluid out of a circulatory pump system commonly used in both dialysis treatments and industrial manufacturing. A long tank catches the fleshtone discharge, pooling before it is spit back out from the carriers’ unending, regurgatory struggle. A telling reference for Lee is vore, a fetish involving the impossible urge to swallow the object of one’s desire in a total annihilation of boundary between self and other, necessitating a supreme violence. Rather than offer a clear aggressor or desiring party, Carriers, both the work and as an exhibition, instead turns to uncompromising partiality, reminiscent of the familiar or bodily in its spurting cavities without committing to a single, identifiable form. It is presented concurrently with Lee’s inclusion in the Venice Biennale, the Busan Biennale, and the 58th Carnegie International, in addition to her two solo shows at the MMK Frankfurt and the Kunstmuseum Den Haag in 2022.
Past Exhibitions 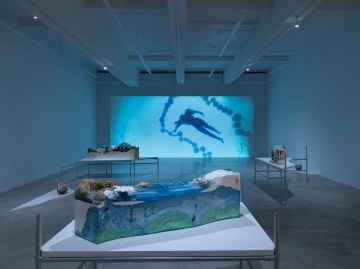 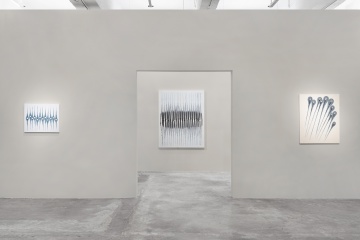 March 24, 2022 - April 30, 2022
“The range of processes from ripping to creating penetrating holes...is not different from drawing lines and dots with a brush. Both contain the performance of the artist’s volition.” -Kwon Young-Woo Tina Kim Gallery is pleased to present Gestures in Hanji, a solo exhibition of Kwon Young-Woo (1926-2013) who was a leading artist of the Dansaekhwa movement, on view from March 24 - April 30, 2022. This is the artist’s first exhibition with the gallery featuring Kwon’s signature works on paper from the 1970s to 2000s. The exhibition traces the trajectory of Kwon’s work throughout his artistic career: his early 1970’s works showcasing his method of cutting and tearing sediment-like layers of hanji (traditional Korean mulberry paper); his Paris period (1978-1989), in which he first introduced pools of color into his compositions; his return to Korea in 1989, which prompted his singular attention toward overlapping lines of color; and finally, his return to the two-dimensional plane in the early 2000’s with misty-white geometric forms over bare canvas backgrounds. One of the few Dansaekhwa artists trained in Oriental ink painting, Kwon instantiated a new relationship between paper and the means by which it was manipulated that touched both the practices of ink painting and hanji in the East and postwar abstraction in the West. Employing traditional material approaches in service of a modernist vision, the artist rejected medium specificity in favor of highlighting the sculptural and architectural possibilities of paper. From his earliest work onward, Kwon saw paper as both surface and structure. He fluctuated between techniques of collage and décollage, often within the same work: layering, pressing, and sculpting it and at other times, ripping, puncturing, and saturating it. Oftentimes using his fingernails to manually scratch and tear the surface of paper from behind, his visceral treatment of paper became a driving force of his practice. Though his early work centered the complex minutiae of white tones present in hanji, Kwon’s experimentation with the paper as material and method evolved in the late 1970s once he began using monochrome tonal ink and shadows to create optical effects. Creating hair-thin incisions that often dredged into coarse tears in the paper, he would apply ink to the back, allowing it to bleed down and absorb around and through the lacerations. After his return to Korea in 1989, Kwon began to fixate on color and tone rather than structural manipulation. The artist introduced thick lines of blue, brown, and yellow pigments into his works that were made by mixing Western gouache with meok (Chinese ink). This process was a continuation of Kwon’s life-long investigation of chance creations and the collapse of hemispheric divisions. In the 2000s, Kwon incorporated geometric shapes by overlapping thin layers of almost translucent hanji on wooden panels, revealing the complexity of the white paper. Kwon’s work avoids the binary characteristics defining “Eastern” and “Western” art as much as it does the structural limitations of medium specificity. In using unconventional tools and his bare hands to experiment with the materiality of hanji, Kwon conjured a pioneering abstract vocabulary in the two-dimensional frame. In his devotion to material, the singular artist was able to slip, sublimely, into a mode of making unconcerned with vogue, even as it rendered visible the ever-flowing mutability of tradition. Kwon stated, “I do not know when the conclusion of my practice may be, but what is important to me is to keep going forward one step at a time, with commitment, and to do it continuously.” ABOUT KWON YOUNG-WOO Kwon Young-Woo (1926-2013) matriculated at Seoul National University in 1946 in the first class of the College of Fine Arts and studied oriental painting. He received his MFA, also from Seoul National University, in 1957. He taught at Chung-Ang University from 1964 to 1978 before moving to Paris, where he spent about ten years fully devoted to his studio practice. He has had solo exhibitions in major venues including Blum & Poe, New York (2016); Kukje Gallery, Seoul (2015); Seoul Museum of Art (2007); National Museum of Modern and Contemporary Art, Korea (1998); Ho-Am Art Museum, Seoul (1990); and Jacques Massol Gallery, Paris (1976). His work has also been featured in international biennials and group exhibitions, such as Korean Abstract Art: Kim Whanki and Dansaekhwa, Powerlong Museum, Shanghai (2018-19); When Process Becomes Form: Dansaekhwa and Korean Abstraction, Boghossian Foundation, Brussels (2016); the official collateral exhibition of the 56th Venice Biennale Dansaekhwa, Venice Biennale, Venice (2015); Five Korean Artists, Five Kinds of White at Tokyo Gallery (1975); the 12th Biennale de São Paulo (1973); and the 8th Tokyo Biennale (1965). His works are included in the collections of art institutions including the MMCA, Korea; Seoul Museum of Art, Korea; Leeum, Samsung Museum of Art, Seoul, Korea; the British Museum, London, UK; and Centre Pompidou, Paris, France. 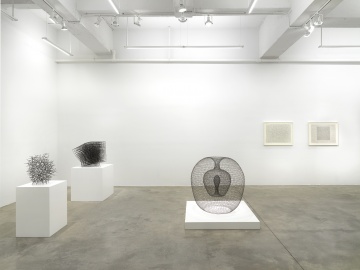 November 18, 2021 - January 29, 2022
Curated by John Yau, the exhibition, The Unseen Professors: Leo Amino (1911-1989), Minoru Niizuma (1930-1998), John Pai (b. 1937), focuses on the sculptures of Leo Amino, Minoru Niizuma, and John Pai, three Asian artists who were born in Taiwan, Japan, and Korea between 1911 and 1937, and immigrated to America. Eventually, all of them moved to New York City, where they worked and taught for many years in leading institutions, such as Cooper Union, Pratt Institute, and Columbia University. In fact, despite belonging to different generations, their teaching careers overlapped for more than decade (1964-77), during which time a generation of artists associated with Minimalism and site-specific art gained much of the art world’s attention. 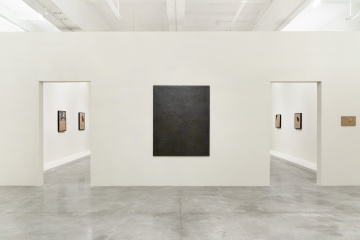 The Stillness of Water 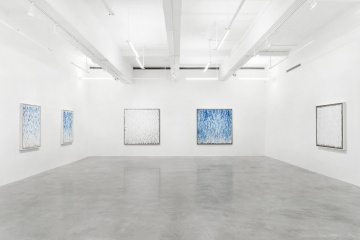 May 8, 2021 - June 30, 2021
“An artist should constantly grapple with color. And I thought I would be able to finally complete the puzzle of my art world when I fill in the missing color.” – Ha Chong-Hyun Tina Kim Gallery is pleased to present Return to Color, a solo exhibition of works by Ha Chong-Hyun (b. 1935), one of the leading members of the Dansaekhwa movement. Ha Chong-Hyun began his Conjunction series in the 1970s and has developed the techniques into a signature style. The word “Conjunction” denotes the physical connection between two significant elements of his practice, his methods and his materials, and how the two are ‘conjoined.’ He started to use burlap in replacement of the more traditional canvas popular after the Korean War. It allows him to approach each painting from the reverse, pushing thick paint through the loose weave. The oil paint then emerges from the front, creating a texture that has become iconic to Ha’s practice. In 2011, Ha moved away from his traditional oeuvre, engaging in an experimental series called Post-Conjunction, which reflects a pivotal change in his artistic philosophy. Unlike the original Conjunction series, Ha utilized an array of colors in creating Post-Conjunction works, a dynamic shift from his otherwise stalwart usage of monochrome. This series would go on to inform his new Conjunction works constructed in the last decade that contain hybridized properties of post and original. Marking his third solo presentation with the gallery, the exhibition surveys the last decade of the artist’s practice with new polychromatic works that illuminate a return to color as well as a departure from his foundational, monochromatic Conjunction series first developed in the 1970s. The exhibition will be on view from May 8 to June 30 2021.