May 14, 2022 - May 17, 2022
The American Art Fair celebrates its fifteenth year from May 14-17, 2022 at Bohemian National Hall, 321 East 73rd Street, New York City. The Fair opens spring American Art Week in New York and focuses on American (including Mexican and Latin American) 19th and 20th century works. More than 400 landscapes, portraits, still lifes, studies, and sculpture will be exhibited by 17 premier specialists.

April 1, 2022 - February 10, 2022
ABOUT THE WINTER SHOW The Winter Show is the leading art, antiques, and design fair in America, featuring many of the world's top experts in the fine and decorative arts. The Fair was established in the mid-1950s as a benefit for East Side House Settlement and, by the end of that decade, had firmly established itself as the leading event of its kind in the United States. Over the course of its 68-year history, the Fair has been held at the historic Park Avenue Armory for all but three years. Following the Show's 2021 online edition, we are delighted to return to the Park Avenue Armory for The Winter Show 2022 running January 21 - 30. We are pleased to present 69 international dealers showcasing a dynamic selection of works spanning over 5,000 years of fine art, decorative objects, and jewelry from antiquity through the present day. Each object will be reviewed by our vetting committee, comprised of experts from the United States and Europe. The Winter Show 2022 is thrilled to welcome back dealers and visitors alike as we come together to celebrate the Show's 68th anniversary. We hope you will join us for the Show's Opening Night Party on January 20, 2022, benefiting East Side House, a community-based organization serving the Bronx and Northern Manhattan. East Side House's programs focus on education and technology as gateways out of poverty and as the keys to economic opportunity. 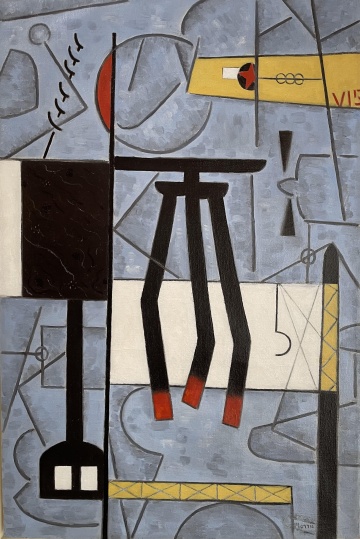 November 4, 2021 - November 7, 2021
We are exhibiting works by American artists working in abstraction in the 1930’s and 1940’s who were inspired by the Collage process. It will include oils, watercolors and collages by such artists as George L.K. Morris, Charles Green Shaw, Emil Bisttram, Raymond Jonson, and Werner Drewes.