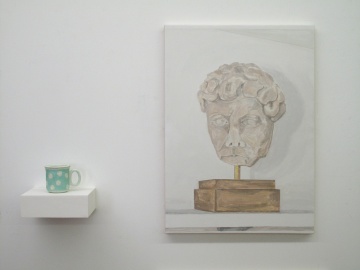 March 7, 2020 - April 19, 2020
Talley Dunn Gallery is honored to present an exhibition of new paintings and sculptures by Francesca Fuchs, Painting and Mugs. The exhibition will run from Saturday, March 7 – April 18, with an opening reception on March 7 from 6 – 8 pm. Fuchs will give brief remarks at 6:30 pm. In Painting and Mugs, artist Francesca Fuchs displays paintings in groupings. Thickly oil-painted ceramics of mugs are paired with paintings of objects and paintings of paintings. Fuchs jostles images of last century stylizations with representations of classical art and the domestically mundane. From a framed image of the Pantheon in her childhood home, to the unassuming mugs she uses to drink her daily tea, Fuchs’ subjects are drawn from her immediate surroundings. Pairing and matching her works into carefully curated groupings, Fuchs creates confluences and dialogues between the past, the personal, and the everyday. In doing so, the artist deflates hierarchies of distinction between high art and other forms of making, asking viewers to carefully consider the nature of art, objects, and painting. Image caption: Studio Installation Shot, 2020 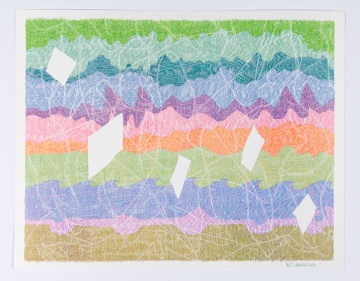 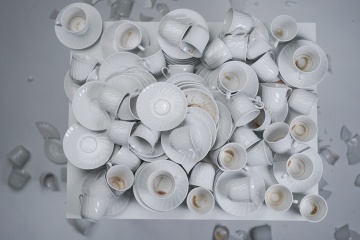 January 11, 2020 - February 26, 2020
Talley Dunn Gallery is honored to announce Nida Bangash’s first exhibition at the gallery, The History House. The exhibition will run from Saturday, January 11 – February 22, with an opening reception for the artist on January 11 from 6 – 8 pm. Bangash will give brief remarks at 6:30 pm. The History House is an exhibition of video installations, photographs, and paintings that explore contemporary legacies of colonialism. Bangash’s highly conceptual works reveal the charged social and political undercurrents of the seemingly benign domestic sphere. The exhibition is titled after a symbol representing India’s history in Arundhati Roy’s novel The God of Small Things and considers Indo-Persian history’s continued relevance to the present. Trained in the traditions of miniature painting and carpet weaving, Bangash utilizes both formalism and conceptualism in her intricate and rigorously thought-provoking works, urging viewers to interrogate ideas of culture, location, and subjectivity. Three of the artist’s series that operate around distinct domestic objects—the roof, the bench, and the table—are staged in the exhibition. Roof | چ ھت is a series of multipaneled paintings, each adorned with the tessellating Iranian pattern Toranj commonly used to embellish books and rugs. Delineated along a sharp angle, the base of each page is painted over with white pigments made of titanium and lead and drawn on with copper and silver, which will slowly tarnish the works. The paintings are arranged alongside one another so that the white bases combine into the shape of isosceles triangles. As the title suggests, the triangle evokes the form of a roof. Reflecting on her childhood drawings of houses, Bangash considers how the European cartoon archetype of a house with a rectangle body, a door, triangular roof, and chimney has become the universal symbol of “home.” However, most houses in the world, including the ones Bangash grew up in, do not resemble this form. Thus, the white roof raises questions about how knowledge is generated across global hierarchies of culture. Also included in the exhibition is a five-channel video installation This Bridge Called my Back in which the artist balances both a bench and a man on her back in five different locations. Bangash comments on the dialectical relationship between the colonizer and the colonized. The colonizer cannot exist without someone to colonize. Likewise, the colonized cannot exist without someone who colonizes. While the man does not share the weight of the bench or of Bangash’s body, he must work to equally distribute his weight on top of the artist just as the artist works to balance the man. Bangash’s work illustrates the colonial system, which cannot hold itself together without both parties working to sustain it. Sight_Plan is a two-channel video installation that questions the history of empire through everyday forms of a table and porcelain teacups and saucers. Featured on a monitor is a bird’s-eye view of anonymous white-clad figures stacking tea-stained white china on top of a table. As the cups and saucers pile up, the porcelain continuously falls and shatters. Projected on the opposite side of the wall, the second video reveals the artist knelt down on the floor, supporting the table upon which the china is stacked with her shoulders and head. She exerts herself, her breathing becoming increasingly labored, to the point of exhaustion. Bangash literally unsettles Western domesticity’s appropriation of tea and china. Her body reminds viewers of the bodies which made colonial tastes for fine ceramics and beverages possible. Nida Bangash holds an MA (Hons.) Visual Art from the National College of Arts in Lahore and an MFA from Southern Methodist University. Bangash additionally received the Charles Wallace Arts Fellowship to study at the Princes School of Arts in London. Bangash has exhibited in the United States and internationally with artwork that has been shown in the Crow Collection of Asian Art Museum, Dallas; The Reading Room, Dallas; Kent Gallery, Florida State College Jacksonville, Florida; Milwaukee Institute of Art and Design, Milwaukee; Idea Store, Whitechapel Gallery, London; Belconnen Arts Center, Canberra, Australia; Saeed Akhtar Studio, Lahore; Zahoor-ul Alkhlaaq Gallery, National College of Arts, Lahore; Drawing Room Gallery, Lahore; Canvas Gallery, Karachi; and Gulmohar Art Gallery, Karachi. Bangash currently lives in North Texas. 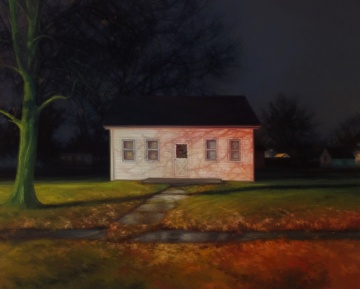 January 11, 2020 - February 22, 2020
Talley Dunn Gallery is pleased to present an exhibition of new paintings by Sarah Williams, Rural Routes. The exhibition will run from Saturday, January 11 – February 22, with an opening reception for the artist on January 11 from 6 – 8 pm. Williams will give brief remarks at 6:30 pm. Sarah Williams paints softly illuminous scenes of seemingly empty homes and deserted neighborhood streets in rural Midwestern towns. Embraced by hazy night skies, bare roadside trees and unassuming shingled houses glow in the light spilling out of street lamps, windows, and strings of Christmas adornments. Williams’ oil on panel works capture the simultaneously disquieted and comforting atmosphere of ordinary small towns in the stillness of night. The paintings carefully attend to the character and identity of communities in isolated parts of the country. As increasing numbers of Americans move out of rural towns in favor of cities, Williams reminds us of the homes and places that still carry collective histories and memories. Williams was raised in Brookfield, Missouri’s small-town farm culture. Her practice centers her personal experiences with and relationship to home. Therefore, the artist is intimately invested in finding meaning in peripheral sites that are often overlooked or ignored. Williams paints structures that have been lived in and worn with use, marking both how space defines people and how people shape space. Sarah Williams received her Bachelor of Fine Arts degree from William Woods University, Missouri and a Master of Fine Arts degree in drawing and painting from the University of North Texas in 2009. The artist is now a professor of painting at Missouri State University in Springfield, Missouri. Williams’ paintings have been featured in one-person exhibitions at the Tyler Museum of Art, Texas; Nicolaysen Art Museum, Casper, Wyoming; Elmhurst Art Museum, Illinois; Moody Gallery, Houston; the Art Museum of Southeast Texas, Beaumont; the Galveston Art Center; McMurtrey Gallery, Houston; and George Billis Gallery, Los Angeles. In addition, the artist has been granted numerous awards, including residencies at Millay Colony for the Arts Artist in Residence, Austerlitz, NY; Willapa Bay AiR in Oysterville, Washington (2015); the Ucross Foundation Artist Program in Ucross, Wyoming (2013); artist’s grant and residency at the Vermont Studio Center (2010); and the Muriel Braeutigam Memorial Prize from the St. Louis Artists’ Guild (2004).

Cover Up, Grassland, and Shakespeare