Shoshana and Wayne Blank opened their first gallery in 1986 in Santa Monica in a historic building that once housed the iconic Beach Boys’ Studio. From the very beginning the gallery had a mission to give women artists a platform for exhibitions in Los Angeles and to help energize and promote their careers. Gallery exhibitions often focused on discoveries of new, fresh talent. Among the artists exhibited at the gallery, in many cases early in their careers, were Nicole Eisenman, Kiki Smith, Arlene Shechet, Pae White, Yoko Ono, Dinh Q. Lê, Yuken Teruya, Mounir Fatmi, Lorna Simpson and Nan Goldin, to name a few.
Ono, for instance, was far more widely known in the 1990s as a celebrity than as an artist in her own right. When she came to Los Angeles to install her show and participated in a public program at the gallery in conjuction with LACMA, the show began to draw large crowds.
“West Coast Duchamp” in 1990 was a turning point in the gallery program, presenting a recreation of Duchamp’s first retrospective at the Pasadena Museum of Art in 1963, a show organized by the Museum’s legendary director Walter Hopps. The show included all the artist’s ready-mades, generously loaned by the Israel Museum in Jerusalem, with original artwork and photographs by Julian Wasser documenting the Pasadena show opening in 1963. The gallery sponsored an all-day symposium at the Santa Monica Library organized by Bonnie Clearwater. Participants included Walter Hopps, Beatrice Wood, Francis Naumann, Henry Hopkins, Robert Pincus, and more. The gallery together with Clearwater published a book tracing the connections between Duchamp and the West Coast.
The Duchamp show directed the focus of the gallery more toward conceptual art. Shoshana Wayne mounted important survey shows of Christian Boltansky and Bruce Nauman, as well as Viennese Actionism, to name a few. Rachel Lachowicz also staged “Red Not Blue” at the gallery, a seminal performance piece that is today widely referenced in books on contemporary art and feminism.
In 1994, the city of Santa Monica approached Wayne Blank to present ideas for developing a 6-acre lot with dilapidated industrial structures in the heart of Santa Monica. The city was interested in Wayne’s vision for the space after he developed artists’ studios at the Santa Monica airport by converting a run-down hanger.
In 1994 following the L.A riots and an earthquake that resulted in a recession and challenged the Los Angeles art scene, Wayne’s vision to build Bergamot Station as an art center was unanimously accepted by the city and six months later the center was completed with galleries open for business. Wayne’s early vision of converting industrial spaces into art galleries and museums became a model for other cities around the world. Bergamot Station (Wayne coined the name), included some of the best galleries in Los Angeles at the time – dealers like Patricia Faure, Rosamond Felsen, Burnett Miller and many more, including Shoshana Wayne which opened with a Joel Otterson exhibition in a custom built 5,000 square foot space designed by Fred Fisher & Associates. Thousands of people attended the gallery reopening at the new center.
Over the next 25 years the galley presented shows at Bergamot Station of Balthus (his first and only show in Los Angeles), Anselm Kiefer, Barbara Bloom’s “Pictures from the Floating World,” in collaboration with Leo Castelli Gallery, Michal Rovner, Mounir Fatmi, Yoko Ono, Dinh Q. Lê, Shirley Tse, Jeffrey Gibson, the YBAs (Young British Artists) presented in collaboration with Victoria Miro Gallery, Russell Crotty, and Arlene Shechet, just to name a few of the more memorable exhibitions.
Performances, lectures, curator talks, and occasional film screenings were also part of the gallery program. A Peter Hutton film series was a highlight, while Kelly Nipper staged a memorable performance that lasted for two weeks, “Norma - Practice for Sucking Face” with 5 dancers performing every day. During this time Shoshana Wayne Gallery collaborated with museums for exhibitions and placed artists in important collections worldwide, including Kiki Smith at the Israel Museum in Jerusalem, Dinh Q. Lê at MOMA and the Asia Society Museum in NY, Yoko Ono at the Israel Museum in Jerusalem, and at the Umm el-Fahem, Palestine. The gallery has also participated in major international art fairs including Art Basel, Art Brussels, Paris Photo, and the Armory Show.
Shoshana Wayne Gallery moved into a temporary exhibition space on Jefferson Blvd. in the West Adams district of Los Angeles in 2019, in anticipation of opening a new 7,000 square foot permanent home nearby.
Additional forthcoming exhibitions include; a mid-career retrospective of Rachel Lachowicz, curated by UC Santa Barbara Professor of Art & Architecture Jenni Sorkin; and solo presentations of Stephen Antonakos, Tadaaki Kuwayama, Rakuko Naito, Sabrina Gschwandtner, and Thordis Adalsteinsdottir.
Artists Represented: 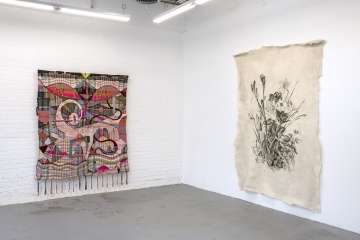 June 15, 2021 - August 28, 2021
Shoshana Wayne Gallery is pleased to announce “Above & Below,” an exhibition of work by 12 artists working with fabric, cloth, beads and woven materials. The exhibition opens to visitors June 15th and runs through August 28th, 2021. The exhibition title refers to the process of weaving—threading above and below lines of thread to create a fabric. Though the use of weaving and woven materials is what unites each of these artists, they employ a diverse range of artistic processes and practices from weaving, quilting, sewing, needlepoint and felting to assemblage and threading. Image: Installtion view