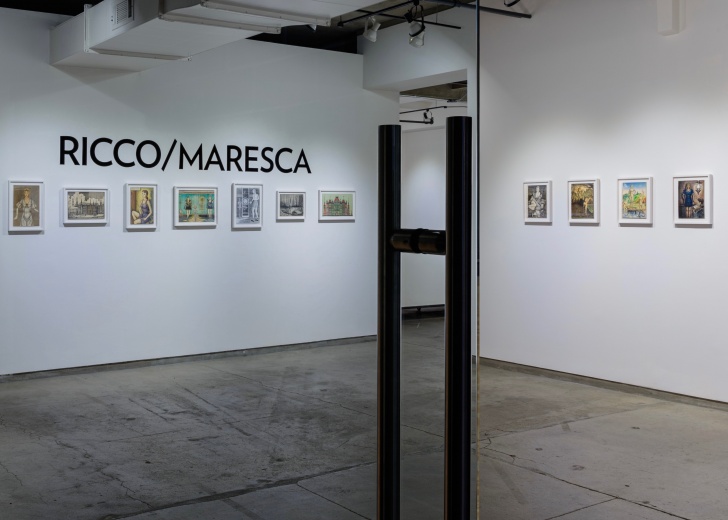 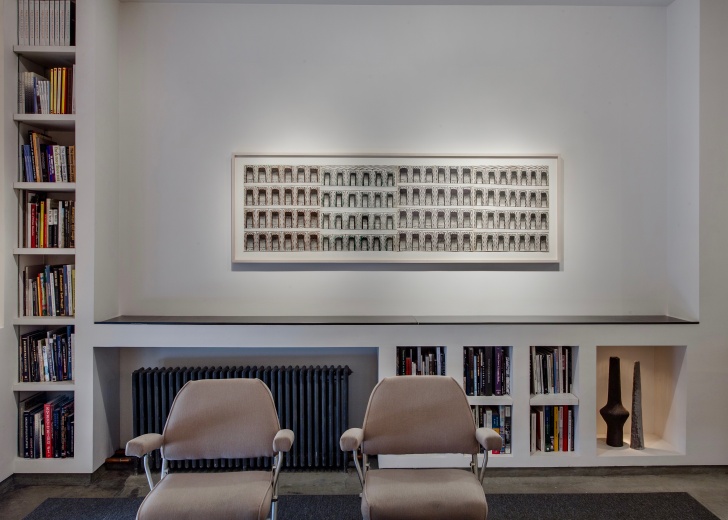 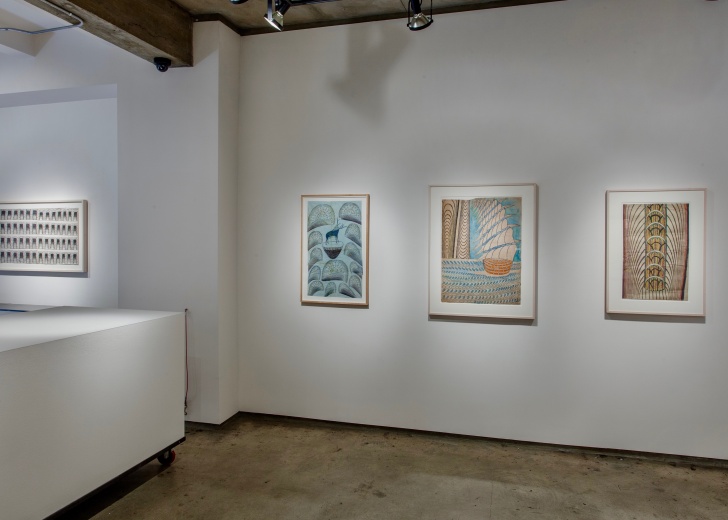 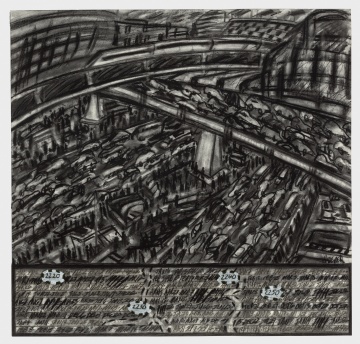 George Widener was born in Cincinnati, Ohio in 1962. A calendar savant, Widener has created distinct bodies of work that represent the depth and versatility of his visual and conceptual toolbox: from his Titanic works and Megalopolises to his Crispr and Pi works, from his Magic Circles and Magic Squares to his Self-Portrait series. The group of works included in Mindscapes presents a series of expressive vignettes capturing the traffic and chaos of modern cities, which Widener experienced during past travels to Europe and Asia. Using his innate eidetic memory—the ability to recall an image from memory with great precision—Widener conjures these scenes with ink and charcoal, employing densely rendered and overlapping networks of lines. The small format of these drawings allows the artist to work quickly and spontaneously; the recurring date panels at the bottom of each work capture a unique aspect of his interior life—counting dates to calm himself down amid the urban turmoil. Widener’s work is in private and museum collections worldwide, including the American Folk Art Museum in New York, the National Gallery of Art in Washington D.C., the Philadelphia Museum of Art, Intuit: The Center for Intuitive and Outsider Art in Chicago, the Kroller-Muller Museum in the Netherlands, the Collection de l’Art Brut in Lausanne, Switzerland, the abcd/ ART BRUT collection and the Centre Pompidou, both in Paris. 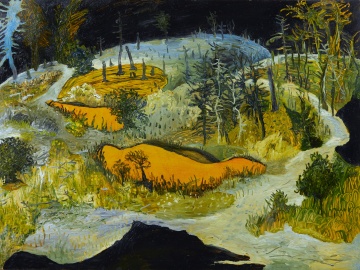 [Artist Debut] Laver was born in 1970 in Victoria, British Columbia and raised in a rural area of Vancouver Island, where he spent his childhood exploring the surrounding beaches, tidal swamps, creeks, and forests. His current and ongoing body of work depicts landscapes of a mysterious beauty that is at once luscious and moody, cohesive and in flux. Without reference to photographs, drawings, real places, or even conscious memories, Laver starts with a limited palette and no pre-existing plans, and discovers his paintings in the act of painting, arriving at the composition last. Each work provides its own surprises, as new symbols and motifs emerge, grow, and repeat, adding to his ever-expanding invented world. 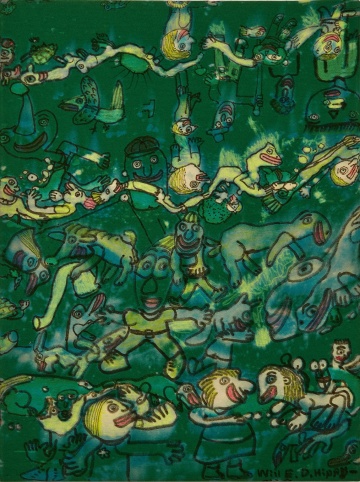 William Eugene Doleman was born in San Francisco in 1949. Since 1991, he has been living on and off in Grass Valley, California, a small mining town in the foothills of the Sierra Nevada Mountain range. A self-described “volunteer peasant” and an eccentric, Doleman has lived in and out of a trailer for 50 years. “My parents went through the Depression when they were young teens,” he says. “That had an effect on me… They were very frugal, they lived off very little,” adding that he is planning on fixing up a motor home that he recently purchased—which will put him on his way to becoming a true nomad. When he moved to California, Doleman started to tie-dye fabrics, and at one point it occurred to him to cut and stretch them to utilize as canvases. This pre-existing color base serves as inspiration for the drawings that then emerge: whirlpools of figures with varying degrees of human and animal traits that coexist happily in a flexible non-perspectival space—which Doleman manipulates by removing some of the color (or un-dying) to create negative spaces, luminosity, and contrast. 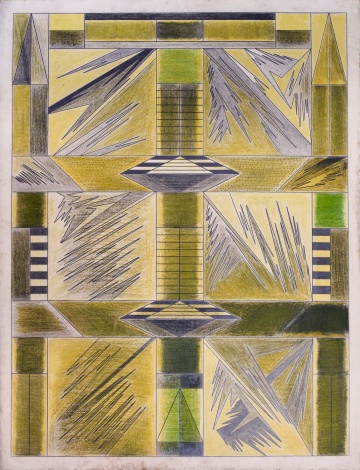 Guccione (1898 - 1966) worked in private and claimed to be channeling a mysterious force that took a hold of him in bouts of creative energy—when his body and mind were not his own. His oeuvre is both deeply abstract and reminiscent of futuristic architectural landscapes; of buildings and labyrinths that fluctuate between flatness and three-dimensionality, interweaving densely packed color with subtle shading. All the works in this online exhibition have never been seen or offered. 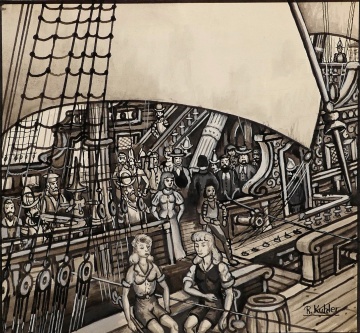 Renaldo Kuhler (1931 - 2013) created an imaginary country he called Rocaterrania as a teenager and set out to illustrate its history for the rest of his life. An amalgam of Kuhler’s varied cultural and aesthetic tastes, Rocaterrania is a sovereign nation situated on the border of New York state and Canada, Rocaterrania’s name was derived from Rockland County, NY, Kuhler’s childhood home. The country has a unique government, military, language, religion, architecture, movie industry, and a fully mapped geography of cities, mountains, farmlands, lakes, and rivers. It also has a dramatic history of oppression, revolutions, prosperity, and reversals of fortune—one that mirrors the narrative arc of Kuhler’s own life. This two-part exhibition features works that have never before been offered. 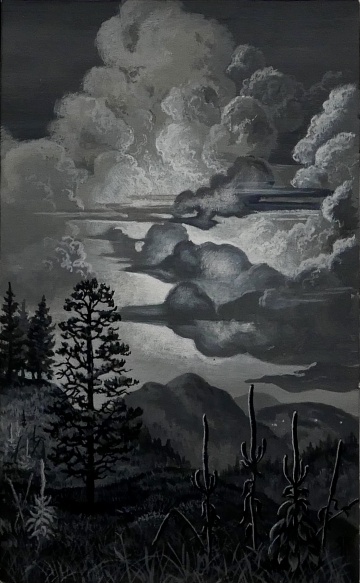 Stories From Rocaterrania - Part I

Renaldo Kuhler (1931 - 2013) created an imaginary country he called Rocaterrania as a teenager and set out to illustrate its history for the rest of his life. An amalgam of Kuhler’s varied cultural and aesthetic tastes, Rocaterrania is a sovereign nation situated on the border of New York state and Canada, Rocaterrania’s name was derived from Rockland County, NY, Kuhler’s childhood home. The country has a unique government, military, language, religion, architecture, movie industry, and a fully mapped geography of cities, mountains, farmlands, lakes, and rivers. It also has a dramatic history of oppression, revolutions, prosperity, and reversals of fortune—one that mirrors the narrative arc of Kuhler’s own life. This two-part exhibition features works that have never before been offered. 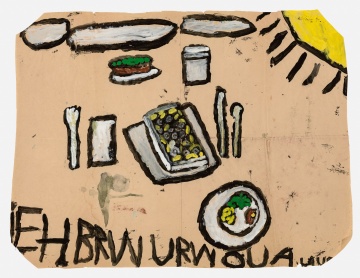 Laura Craig McNellis was born in Nashville, Tennessee, in 1957. As the youngest of four sisters. McNellis’s developmental disability became apparent early in her life. Because McNellis is non-literate and her speech understood only by family members, her paintings have become an extraordinary means of personal expression. Often a painting portrays an episode from her day and sometimes a series of works will develop from a particular event that fascinated her. Her acute powers of observation enable her to depict eloquently the people, objects, and events she encounters. Her art makes it clear that the artist sees a different, though in no way diminished, world. 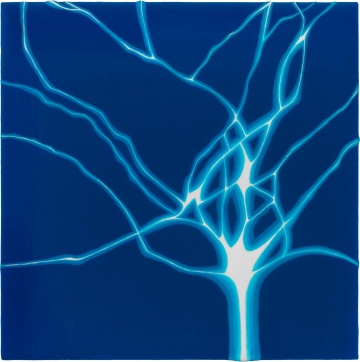 Simpson's acrylic paintings layer color on color until their surface resembles a waxy patina. The artist's translucent fields hold geometric and organic systems of repetition that self-destruct and re-invent themselves, veering on and off the grid in a deceptively vast space. 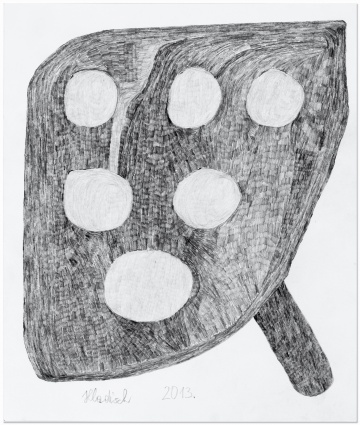 Hladisch (b. 1961) has been one of the eight residents of the Gugging House of Artists in the outskirts of Vienna since 2013. Using short, close-set strokes to fill in traced contours, Hladisch depicts everyday objects from memory or inspired by print media. His stylized drawings marry emotional intensity, imagination, ingenuity, and technical precision—crossing seamlessly into the modern and contemporary arenas.
Past Exhibitions 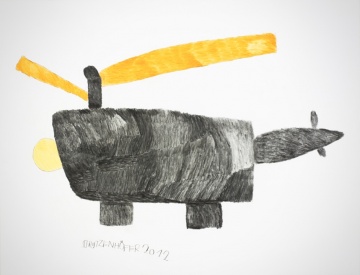 September 18, 2021 - October 23, 2021
We are pleased to announce gugging / art brut, featuring over 30 works by six artists, produced from the 1970s to the present at Gugging—Austria’s foremost cultural center dedicated to championing the field of art brut. Spanning across generations of artists who found their calling at Gugging, this exhibition highlights the profound originality and remarkable artistry that this forward-thinking institution has fostered for many decades. gugging / art brut is Ricco/Maresca’s second exhibition featuring artists of Gugging since their debut at the gallery in 2012. 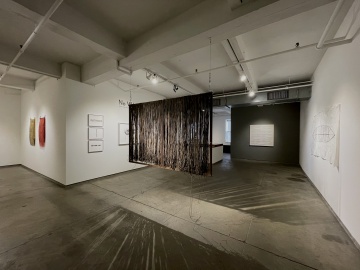 June 3, 2021 - September 11, 2021
A few months before the COVID-19 pandemic hit, artists Hope, Schmidt, and Ross agreed to each select an artifact from the Metropolitan Museum of Art’s vast collection and respond to it creatively. In a serendipitous event, they all chose the Navigational Chart (Rebbilib) from the Marshall Islands. No W here weaves the three individual responses resulting from this inquiry into one visual narrative that strives to facilitate recalibration and sense of place in this era of disequilibrium. 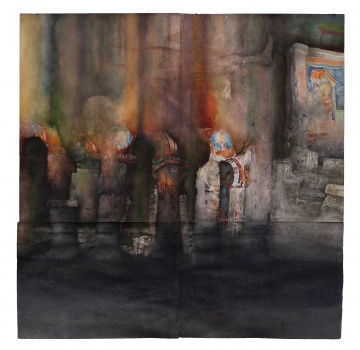 April 17, 2021 - June 15, 2021
For over 30 years, Thomas Lyon Mills has been the only non-archeologist with permission to explore and paint alone in the Italian catacombs. Mills has also received unique access to paint in Mithraeums, in the temple ruins of the unknown civilization at Gabii, in Etruscan tombs down hill-sides hidden in forests, and up in a mountainous Paleolithic cave. With his on-site work and the influence of his dreams, he returns to his studio to work on pieces often for years. 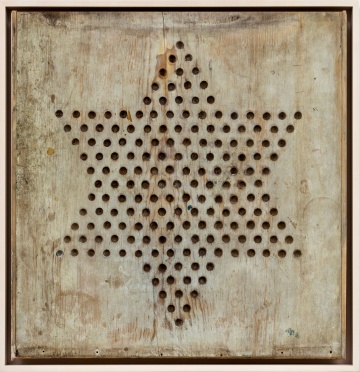 March 18, 2021 - May 20, 2021
Including parcheesi, backgammon, checkers, Chinese checkers, solitaire, and mills boards—all dating between the late 19th through the mid-20th century. Not created as modern or contemporary art, these game boards relate directly to (and often precede) works of geometric abstraction and minimalism. 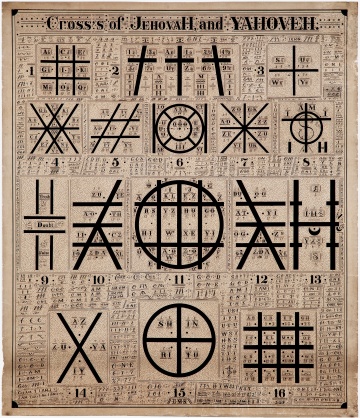 January 28, 2021 - March 13, 2021
George M. Silsbee was a Civil War veteran with many occupations—artist, maker of daguerreotype images, organ builder, and miner among them. The details of his life are obscure, but we know that he was based in Colorado for twenty years toward the end of his life. Around 1891, Silsbee created what he would describe as his master oeuvre; a series of large works on paper backed with linen, densely rendered with writing, calligraphy, charts, and symbols revolving around freemasonry, mysticism, and the occult. "Explanatory Marks" will present a collection of nine such works, which have never been seen until now. 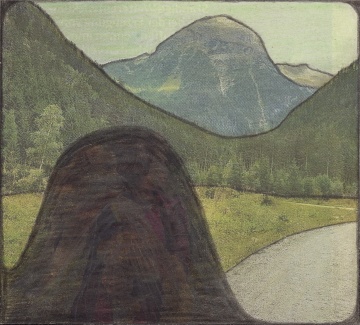 October 29, 2020 - January 23, 2021
Strobl's second one-person exhibition after his debut in 2016. Presenting a selection of his most recent works--all produced between 2019 and 2020. Strobl, born and based in Austria, makes intimately scaled works on paper where naturalism and abstraction seamlessly converge. 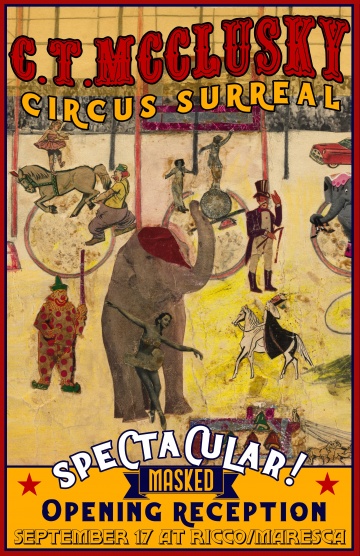 September 17, 2020 - October 24, 2020
McClusky was a circus clown who spent the winter seasons between the late 1940s and mid-1950s at a boarding house in Oakland, California. Working with found materials, he completed 53 mixed media collages on cardboard incorporating photographic cutouts, illustrations, as well as ephemera such as chocolate and candy wrappers. His vignettes from circus life are candid, nostalgic, and strikingly surreal. 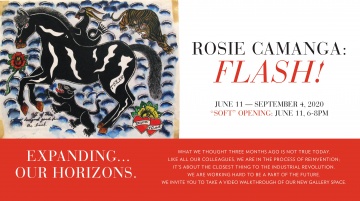 June 11, 2020 - September 4, 2020
Camanga (1910-?) "moved to Honolulu from his native Philippines sometime prior to World War II ... After a couple of years, Rosie had drawn about 400 sheets of flash and left to open his own shop ... [He] was a complete original. Humorous and tough-minded, he survived for decades in control of his own game in a volatile honky-tonk environment ... [His flash] segued from standardized versions of classic tattoo designs to eccentric and mysterious scenarios that were his alone. The format of a sheet of flash, crowded with multiple images, or the notion that something might be appealing to someone to wear indelibly for life, were mere jumping-off points for the world he created. He often collaged sheets with images he liked, which he’d clipped from a magazine or assembled from previous designs, which regularly depicted things and sentiments never seen in any other tattoo context. He continued to draw after he stopped tattooing, using the flash format for ever-more unexpected forms. The phrases accompanying the pictures are rendered in the artist’s adopted and imperfect English, often resulting in some a hilarious and mysterious poetry of meaning. The overall effect is a wacky mixture of cartoon humor, lofty emotions, menace, and smoldering sexuality./ Rosie’s art anticipates today’s stretching of the boundaries in the canon of tattoo themes ... [He] was the real thing: immensely prolific, completely sincere, and driven by a passion for drawing that ultimately sought to satisfy only himself." - Don Ed Hardy 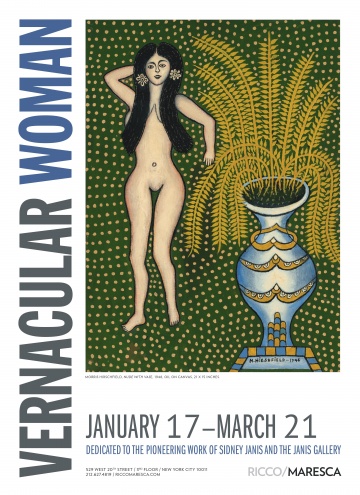