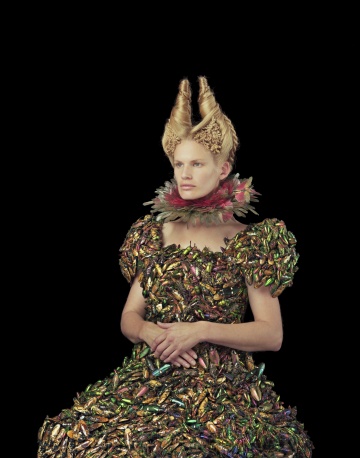 520 West 27th Street
New York, NY 10001
January 5, 2021 - May 8, 2021
Swedish artist Nathalia Edenmont’s exhibition, “Rebirth,” opens on May 7 and continues through June 20. Long fascinated by butterflies, their sheer natural beauty, and their symbolism, Edenmont centers her show around these elusive creatures, creating the largest collages on which she has ever worked, as well as creating garments of iridescent beetles in which she dresses her “sitters” or models. Known for her images of women wearing dresses composed of fruits and flowers, Edenmont takes, what for her, is the next step, toward dresses composed of luminous creatures –no longer alive—golden, green, iridescent pink, blue, shiny, shimmery beetles. A beautiful blonde woman sits placidly as a dress is composed around her, a process that takes from 14-22 hours of work for a team of ten people. Edenmont is the director, the creator, the orchestrator of the photo shoot. Everything in the photo is real. It is “shot” with 8 x 10 film. There is no photoshop, no digital manipulation, no correction of any kind. The artist has to capture what she wants when she clicks the camera or many sheets of 8 x 10 film, hours of work and cost are gone. The artist has attended butterfly fairs all over the world for years to accumulate a sufficient supply of butterflies and beetles to compose her palette. In the new works, the beetles represent transition. A young, beautiful body is hidden and transformed by the beetles, taking the form of a pupa; life transforming from one stage to another. In these portraits, Edenmont continues her exploration of fundamental themes such as birth, death, womanhood, sex, beauty and decay. The works present us with an implied tension between painting and photography, abstraction and figuration, and most importantly attraction and repulsion. Like “beauty and the beast” we are drawn in by the beauty and become squeamish when we know the dress is comprised of hundreds of beetles. In addition to the four new portraits, Edenmont shows several new butterfly collages, the fruits of over 500 hours of work each. The collages become the “maquettes” for her monumental scale photographs. The collages and photographs are composed of hundreds of butterfly wings, all natural and not colorized. The large-scale photographs, brilliant in color, are what the artist considers her abstract paintings.
Past Exhibitions 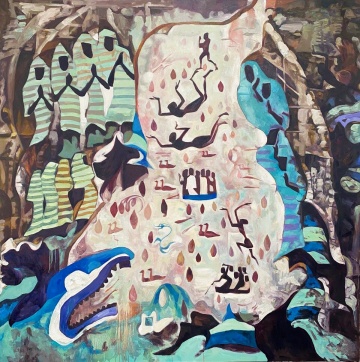 From Prayers to Urns

520 West 27th Street
New York, NY 10001
November 5, 2020 - January 2, 2021
For the first time in our history, we have lived through a Spring and Summer of lockdowns, mask wearing and social distancing due to the coronavirus. Our lives have changed, our patterns of social engagement have changed, and for some artists, the art that has been created during this time has changed. Impacted by the Pandemic, each of the artists in the exhibition has addressed the health crisis differently. Early on in the Pandemic, Hung Liu began a series of Prayer paintings inspired by the cave paintings at Dunhuang in China, which she visited when an art student there 50 years ago. Every 12 years during the year of the rat, the identifying year she was born, Hung Liu paints two paintings 64 x 100 inches each. This year, emblematic of the Pandemic, she painted herself in masks, one the color of linen juxtaposed with a dandelion that has one remaining seed; in the other she wears a mask made from a scarf with the American flag motif juxtaposed with a Chinese character comprised of five strokes. This character is typically used to count time. She paints the same character over and over, counting time. There is no beginning, no end to this time. Katerina Lanfranco’s high-key color paintings, with seeds in both nature and abstraction, incorporate bits of torn fabric, yarn and synthetic flowers, which she overlays with glitter, sand, and paint. As she says, “The many layers of paint applications and diverse techniques speak to the cacophony of modern life.” Her paintings are simultaneously an abstraction of the virus’s spherical form and a celebration of life in its transformation thereof. Don Eddy’s Silent Spring diptych was inspired by a walk down Broadway on April 5, 2020. Everything was closed, there were no people in the street. When the artist reached the end of the island he came upon a flowering magnolia tree, and an empty shuttered ferry terminal, the juxtaposition a poetic comment on the Pandemic, the lockdown, the many deaths throughout the country and especially in New York at that time. The magnolia tree appeared like a symbol of hope. Spring was presenting itself in spite of the virus. Joan Bankemper began a series of urns shortly after the Pandemic began. Having made commemorative urns during the AIDS crisis, the artist seemed to have no choice but to continue that impulse and create what she calls funereal urns, hand coiled pots filled with forget-me-knots and bees. While the urns are not dedicated to any specific person, they are imbued with both the sadness and death of the times as well as symbols of life as manifest in the proliferation of bees. The flowers the artist hand-builds to bedeck the urns speak for themselves: forget-me-knot, or “forget-me not” when I am gone. Joseph Raffael’s Elegy series is a tone poem to a loved one after death. The artist focuses in on a single flower, a central subject and surrounds each bloom with one color. Magnified in scale, with each petal curling toward the viewer, Raffael zooms in on the flower, which is solid and ephemeral simultaneously, an object of meditation. Painted during the months of the Pandemic, Lynn McCarty’s oil paintings on aluminum became about COVID, as she says “through slow layers of time.” The artist writes about the works: “One is open with two separated shapes - yet singular, isolated but warm and together; one is dreamy in an aquatic way, restless and drifting. Inside and outside, above and below. Serene yet ominous. The last pulls together a sort of human depth and darkness into a colorful possible light. Highlighted embers and deep etched random grooves occupy a space filled with history.” For Jody Uttal the works are a direct reflection of the way she was feeling. When the virus first hit, she felt unsafe, and started making tight watercolors with little breathing room or space. As time passed and as she stayed at home, her fear diminished as she accepted the new reality of sheltering. The artist writes about this work: “The watercolors started opening up. There was space in the patterns. Light could come in. They were almost like scrims that I could look through.” The works in this exhibition are a testimony to the enduring spirit of art, springing from this time of uncertainty, isolation, and death.

520 West 27th Street
New York, NY 10001
March 19, 2020 - June 30, 2020
On March 19 an exhibition of new work by Don Eddy opens at Nancy Hoffman Gallery and continues through April 30. Eddy is one of the few early Photorealist painters who has taken his vision into new terrain, and has expanded his unique painting process. In the ‘70s Eddy painted the California urban landscape, focusing on cars, reflections on cars, bumpers, headlights. The subject came naturally to the son of a car body and fender shop father. The artist moved quickly from cars to storefronts to shelves filled with glassware and toys. Eddy’s work of the past four years takes him deeper into the exploration of nature, perception and life’s mysteries. His multi-panel paintings take on a quiet spiritual aura in their contemplative examination of earth’s riches; as well as the magic of the night in the cities he visits. The artist’s subject is as much light as is the manifest content; he paints, as catalogue author David C. Graves writes, ”images that he has meticulously crafted out of the substance of his life’s experiences. He manipulates those images, as if distilling them so as to capture naught but their very essence. He universalizes those substances, so as to make them rich enough for poetry and accessible enough for us to engage.” Some of his new paintings are triptychs with three sections, others are polyptychs with four or five wooden panels. For the past several years Eddy has returned to the urban landscape, this time New York; as well as his experiences in nature, celebrating light and season in the energy of the ocean, a mountain at sunset, a lotus in full bloom. Painted in 20-30 layers of transparent acrylic over an under painting of three colors (the first being circles about a 20th of an inch in diameter of phthalocyanine green, the second being burnt sienna and the third dioxazine purple). With these three colors he separates warm from cool colors, and then begins to add many layers of transparent color to achieve the final palette of each work.

Sculptors and their Drawings