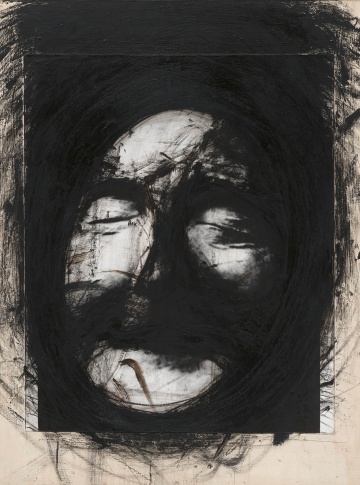 November 23, 2022 - February 11, 2023
Michael Werner Gallery, New York is pleased to present Antonius Höckelmann / Arnulf Rainer, an exhibition of over 70 works by German artist Antonius Höckelmann (1937-2000) and Austrian artist Arnulf Rainer (b. 1929). Featuring a wide array of media, including paintings, sculpture, drawings, photography, and prints, the exhibition provides a unique opportunity to see the works of Höckelmann and Rainer side by side. Working simultaneously from different countries, both artists explored themes of creation and destruction in post-war Europe. Born in Oelde, Germany in 1937, Antonius Höckelmann trained as a wood sculptor in his hometown in the 1950s before studying at the Academy of Fine Arts in Berlin. Höckelmann said, “For me, sculpture is at the root of everything”, which is contradictory to the fact that he completed no more than a dozen sculptures in his lifetime, destroying many. Concerned with the way 3-dimensional works interacted with space, Höckelmann ultimately found sculpture to exist in “an artificial world that relies only upon itself.” Drawing also naturally exists in a realm of its own and became an integral part of Höckelmann’s exploration of form. Art historian Julia Garimorth writes of this development: “Though physical contact with material is an imperative for all sculptors, Höckelmann realized that the simple evocation of this material often proved to be more ‘effective’ than working the material itself. He thus experimented with drawing to replace touch by the evocation of touch.” Born in Baden, Austria in 1929, Arnulf Rainer began his first experiments in overpainting at the same time Höckelmann created his first sculptures. Rainer initially started overpainting out of financial necessity but soon found it to be an important catalyst in his creative process. Works were created over a long period of time and in dialogue with the underlying source material that was often completely obliterated. Rainer never saw his work as complete. A pioneer of the Art Informel movement, Rainer describes the movement, “a state in which all was possible and nothing yet pronounced...a pure state of possibility.” It was possibility that excited him as an artist and the resulting impossibility that tormented him. Plagued by doubt, Rainer turned towards rudimentary forms of communication and expression and, like Höckelmann, a tactual method, wherein he used his own body to paint on canvas. Höckelmann had his first solo exhibition with Michael Werner Gallery in 1966. Afterwards, he exhibited in prominent museums including Kunsthalle Bern (1975), Kunsthalle Köln (1980), the Kunstverein für die Rheinlande und Westfalen in Düsseldorf (1985), and the Hamburger Kunstverein (1986) as well as documenta 6 (1977) and documenta 7 (1982). An exhibition of his work titled “Antonius Höckelmann: All in All” was recently exhibited at the Kunsthalle Bielefeld (2020) and Arp Museum Bahnhof Rolandseck (2020-2021). Arnulf Rainer began exhibiting with the Michael Werner Gallery in the 1960s. He represented Austria at the Venice Biennale in 1978 and exhibited at documenta 5 (1972), documenta 6 (1977), and documenta 7 (1982). Major retrospectives of his work have been mounted at Centre Pompidou in Paris (1984), The Guggenheim in New York (1989), the Stedelijk in Amsterdam (2000), and Kunstforum Vienna (2000). He is the winner of the Austrian National Prize in Graphic Arts (1966) and Painting (1978). A museum dedicated to Rainer’s work opened as part of the Ayn Foundation in New York from 1993 to 1995. Another museum of his work opened in his hometown of Baden, Austria in 2009. Recently, on the occasion of his 90th birthday, the Vienna Albertina hosted an exhibition titled Arnulf Rainer: A Tribute to honor the artist’s career (2019-2020). Antonius Höckelmann / Arnulf Rainer opens Wednesday 23 November 2022 at Michael Werner Gallery, New York and will remain on view through Saturday 28 January 2023.
Past Exhibitions 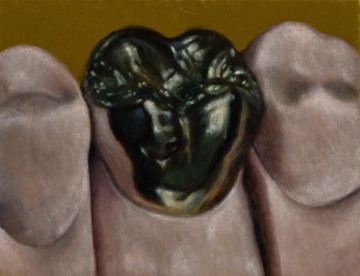 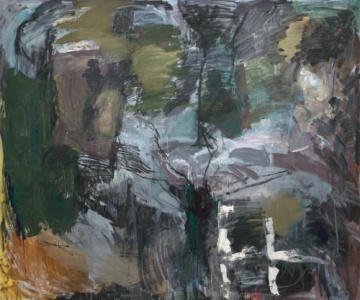 June 22, 2022 - September 1, 2022
Michael Werner Gallery, New York is pleased to present an exhibition of paintings by Danish artist Per Kirkeby (1938-2018). Taking the form of a small retrospective, the show focuses on the artist’s lifelong engagement with landscape, geology, and the natural world. 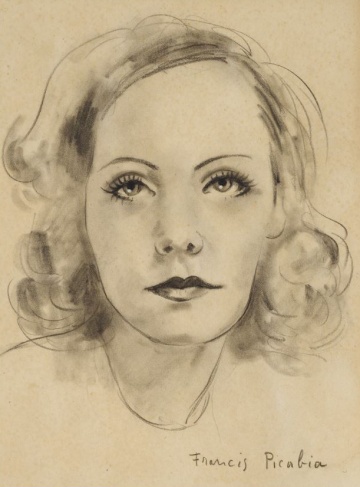 The Grace of the twentieth century is rendered visible by the dithyramb I have invented. Paintings from 1963 – 1976 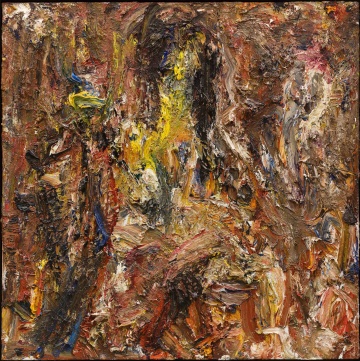 November 11, 2021 - January 8, 2022
Michael Werner Gallery, New York is pleased to present an exhibition of paintings by French artist Eugène Leroy (1910-2000). Living most of his life in Tourcoing, France, near the Belgian border, Leroy painted classical subjects such as still-lifes, self-portraits, and the human figure. He drew inspiration from the history of painting, particularly from the work of masters such as Giorgione, Rembrandt, and Hugo van der Goes. Laboring over his paintings for many years, Leroy built layers upon layers of paint until the subjects are obfuscated and only recognizable through painted glints of light. On view in the exhibition are paintings of Leroy’s muse and lover, Marina Bourdoncle, an artist Leroy met in 1986 and with whom he shared the remainder of his life until 2000. Painting from life was a necessity for Leroy. Never static, Bourdoncle posed for him reading Joyce, Rimbaud, and Proust, as well as playing the guitar or flute. While the nude figure, particularly female and often Marina, was a recurring theme in Leroy’s painting, the subject only served him as a vehicle to capture the movement of light. As the critic Barry Schwabsky has written, “his paintings show no concern with either the flesh or its form but only with what might be called a flash of illumination in which both flesh and form are at once dissolved and memorialized.” Works by Leroy are in major American and European collections and have been exhibited at the Musée d’Art moderne de la Ville de Paris; Stedlijk Van Abbemuseum, Eindhoven; Albright-Knox Art Gallery, Buffalo; and Musée d’Art moderne et d’Art contemporain, Nice. He took part in documenta IX in Kassel in 1992 and in the Venice Biennale in 1995. The Musée Beaux Arts Tourcoing was renamed MUba Eugène Leroy in honor of the painter in 2010. Eugène Leroy: About Marina opens 11 November at Michael Werner Gallery in New York. A catalogue will accompany the exhibition. Social distancing is in effect and wearing a mask is mandatory. Gallery hours are Monday through Saturday, 10AM to 6PM. 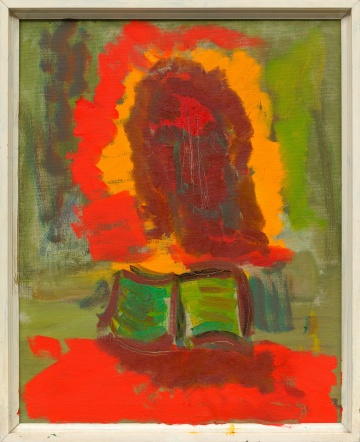 September 15, 2021 - November 6, 2021
Michael Werner Gallery, New York is pleased to present Per Kirkeby: Overpaintings, an exhibition of übermalungen, or overpaintings, by the late Danish artist Per Kirkeby (b. 1938, d. 2018). An accomplished painter, sculptor, writer, and filmmaker, Kirkeby’s career spanned over six decades, making him one of the most influential and versatile artists of his generation. 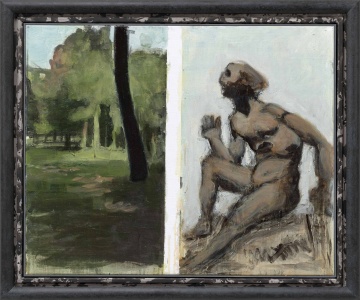 June 30, 2021 - September 3, 2021
Michael Werner Gallery, New York is pleased to present an exhibition of recent paintings by Markus Lüpertz. Featuring paintings made over the last four years in Italy and Germany, the artist masterfully combines Southern and Northern European painting traditions while creating work that is new, innovative and contemporary. 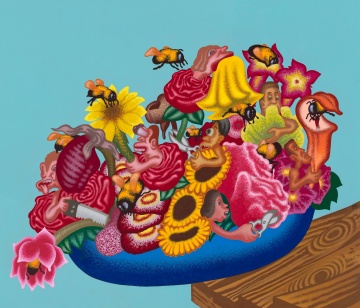 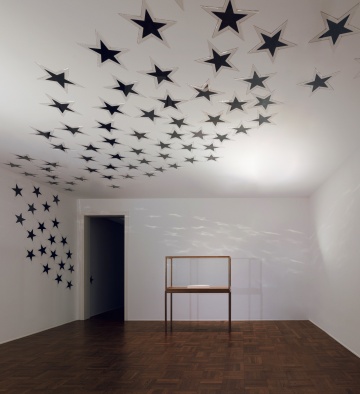 March 5, 2021 - May 1, 2021
Michael Werner Gallery, New York is pleased to present James Lee Byars: The Milky Way. The exhibition will feature Byars’s most ambitious two-dimensional work. Composed of 100 black silk paper stars, The Milky Way will envelop the gallery. This exhibition marks the first time the work has been exhibited. 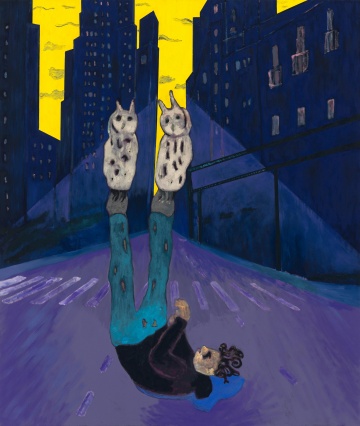 November 19, 2020 - February 27, 2021
Michael Werner Gallery and TRAMPS present Eyes on Fire, an exhibition of recent paintings by Florian Krewer. Krewer’s new paintings are feverish dreamscapes. Larger than life figures, carried by owls and communing with big cats, wander and brawl at night through empty city streets. Ambiguous, intimate, interior scenes are revealed in the moment as if suddenly illuminated by artificial light. The paintings are intensely personal. Objects, figures and scenes are borne from experience, obsession, fantasy and desire. The artist carries us into his world, providing an alternative way of viewing the one we share. Krewer (born in Gerolstein, Germany in 1986) studied painting at the Kunstakademie Düsseldorf. Solo exhibitions include boogie nights, Tom Dick or Harry, Düsseldorf; pinkflavor, TRAMPS, New York; and Car Park Godiva, Michael Werner Gallery, London. Krewer currently lives and works in New York. Eyes on Fire will be on view in two locations, Michael Werner Gallery (4 East 77th Street) and TRAMPS (75 East Broadway, 2nd Floor), starting Thursday, 19 November 2020. The exhibition will be accompanied by a catalogue with text by Yair Oelbaum. 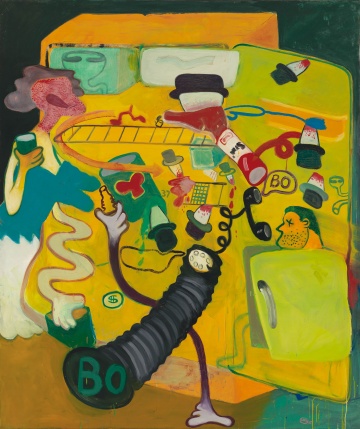 Murder in the Kitchen, Early Works

September 17, 2020 - November 14, 2020
Michael Werner Gallery, New York is pleased to present Peter Saul: Murder in the Kitchen, Early Works, featuring paintings and works on paper from 1959 to 1966. The exhibition charts the artist's development as he emerges as one of the most original voices in 20th century American painting. 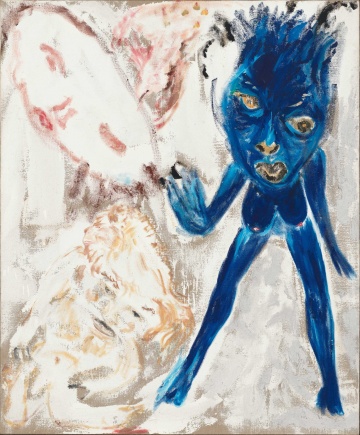 January 31, 2020 - April 11, 2020
Michael Werner Gallery is pleased to present Parapliers the Willow Dipped, Paintings 1967-1997, an exhibition of works by Don Van Vliet. Selected by artist Spencer Sweeney, this is the first New York exhibition of Van Vliet’s paintings in more than a decade. 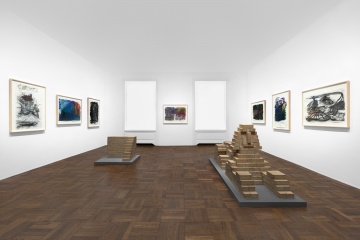 Works on Paper, Works in Brick

November 20, 2019 - January 25, 2020
Michael Werner Gallery, New York is pleased to present an exhibition of works on paper and brick sculptures by Danish artist Per Kirkeby. This is the first time many of these sculptures have been shown since their first exhibition in Europe in the mid-1970s. 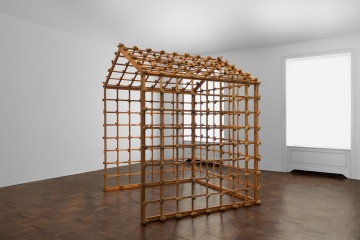 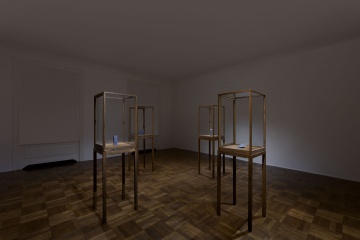 Questions from a Painter Who Reads

Works on Paper and Paintings

Paintings and Bronzes from the 1980s