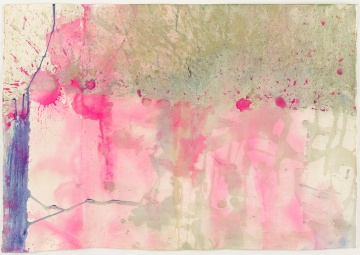 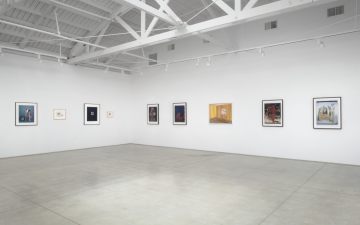 July 9, 2022 - August 27, 2022
Marc Selwyn Fine Art is pleased to present William Wegman: Art By Artist, a show of drawings, paintings and photographs dating from the early 1970s to the present. This marks Wegman’s fifth exhibition at the gallery. The show is curated by Andrew Lampert, editor of the recent book William Wegman: Writing By Artist (2022, Primary Information). 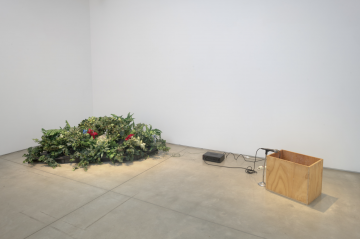 July 9, 2022 - August 27, 2022
Marc Selwyn Fine Art is pleased to present Garden Sound, the gallery’s second exhibition of work by William Leavitt. Leavitt is part of a generation of Los Angeles artists integral to the development of Conceptual art in the 1960s and 70s. Drawing on the fictions and fantasies that power Hollywood, as well as Southern California’s architectural landscape, Leavitt captures distinct filmic moments that seem familiar, yet displaced. In the artist’s set-like installations, images of the California lifestyle come untethered from their original context and take on a sculptural presence. 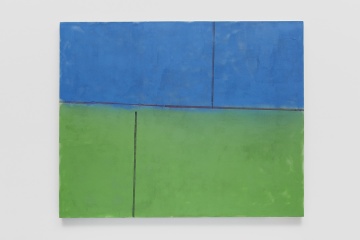 The Remedy of Color: Blue and Green

April 21, 2022 - June 18, 2022
Marc Selwyn Fine Art is pleased to present an exhibition of recent paintings and works on paper by Gerald Jackson. This show runs concurrently with Jackson’s exhibition, Psychic Rebuilding, at Parker Gallery and follows his recent exhibitions at Gordon Robichaux in 2022 and White Columns in 2021. This exhibition highlights Gerald Jackson’s ongoing body of work exploring the metaphysical and visual power of blue and green. Embracing the colors’ associative potentials – sky, water, and earth – Jackson’s paintings aim to transcend the self and embrace our connection to the natural world. For Jackson, these two colors most successfully move beyond social constructs like race and class, to tap into a universal realm of human spirituality. 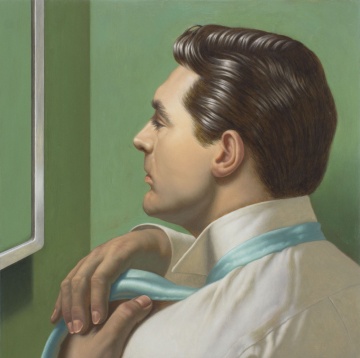 March 12, 2022 - April 16, 2022
Marc Selwyn Fine Art is pleased to present new work by Kurt Kauper. For the entirety of his career, Kurt Kauper has explored the communicative possibilities of form by investigating figurative representation. While his subject matter has included contemporary celebrities, athletes, political figures and opera divas, real and imagined, his works are executed with the technical acuity of an Old Master drawing – the kind he fell in love with as an art-obsessed kid. In conversation with Brian Alfred, the artist commented, “I’m interested in traditional representation. The question for me is always, how am I going to modify that form so that the viewer looks at it as if they have never encountered that form before? I think that is formalism.” Consistently Kauper allows his work to track what he calls the ambiguity of “the place where the decisions are made.” Narratives may be suggested, conventional notions of gender and sexuality are frequently confronted, but no attempt is made to resolve meaning through subject matter. Inspired by the audacious formal experimentation of Ingres as well as the evocative light and shadows in the work of Van der Goes, Bronzino and Holbein, Kauper’s canvases derive their emotional force through pictorial structure and the subtleties of color values. Despite the extraordinary clarity in the depiction of form, the artist’s subject remains enigmatic. His light-infused flesh tones offer no clear story as to how they came to be. Yet the lure of their existence speaks volumes. 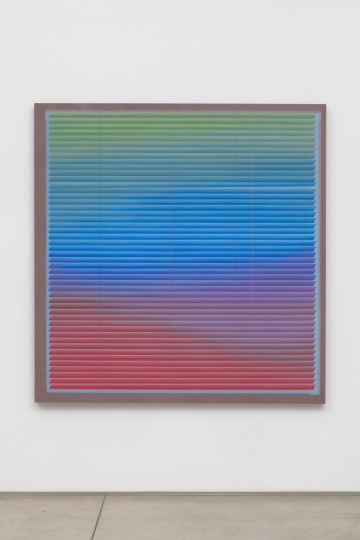 March 12, 2022 - April 16, 2022
Marc Selwyn Fine Art is pleased to present new work by Kevin Reinhardt in cooperation with Grice Bench. Kevin Reinhardt’s meticulously rendered windows could easily be mistaken for minimalist abstractions in the spirit of Barnett Newman. Closer inspection reveals each canvas to be an exacting rendering of slatted blinds. In each composition, solid boxes of color are obscured by the vertical or horizontal louvers. Single strands of colored thread sewn into the canvas highlight the edges and planes, complicating the surface and reinforcing the illusion of three-dimensionality. Irregularities in the blinds – slats are misaligned, the blinds are only half open, edges are broken – occur in every canvas. These views offer a window with limited narrative content (think Sigmund Freud’s windows to the unconscious); the mystery of what might be glimpsed if the blinds are raised remains unknown. Trained as an architect, Reinhardt frequently identifies specific locations as catalysts for his compositions. In this series, his “window paintings” are based on the scaled elevational drawings of Swedish architect Sigurd Lewerentz’s St. Petri Church in Klippan, Sweden. Lewerentz’s design for this building – austere in means but luxurious in thought –has inspired generations to consider context, materials and the methodology of construction as integral to the poetry of architectural form. In his nuanced color sequencings, Reinhardt’s “window paintings” speak most eloquently to a sense of alienation familiarized in works by American painter Edward Hopper. Or perhaps their impact is derived simply from the banality of familiar surroundings. Where is the light source in this scene? What is the view desired by the viewer? Why does this interior insist on masking the exterior? Encircled by these works on canvas, a sculpture of polychrome carved wood exists in counterpoint to the more abstract mystery of the surrounding walls. The bust depicts Sada Abe, a pleasure obsessed geisha. Abe appears defiant, Gyuto blade clenched between her teeth, her gaze falling across the space, obscured by the emptiness before her. As pointed out by Ruth McCormick in a review of the 1976 film In the Realm of the Senses, Sada’s story is one of escape from the conflict found within Eros and Civilization by Herbert Marcuse -- a woman choosing self, left to wander in the pursuit of Eros (love). In an adjacent space, a radiant C-print features an empty hotplate generating heat for no visible purpose. A paper cutout drawing, created by stacking alternating colored sheets of paper, each with interior portions removed, depicts a lone red-tipped cigarette touched by the flame of a stove and left to ash. Kevin Reinhardt was born in 1990 and earned a B.Arch. with a minor in sculpture from USC in 2014. Reinhardt is based in Los Angeles. His work has been featured locally in exhibitions with Grice Bench, Harbor View and Pole, otherplaces. la, and most recently in New York City with Half Gallery.

Do I Have To Draw You A Picture?

January 15, 2022 - February 26, 2022
One of the preeminent figures in the history of conceptual art, Bochner has used verbal, mathematical and geometric systems to motivate the content of his work since the mid-1960s. This exhibition continues his exploration of language in painting, and painting as a language. In these recent oil on velvet works, Bochner uses an embossing technique to build up a rich and variegated surface. Viscous letters spell out an array of synonyms and phrases, from the polite to the perverse, on a porous velvet support which allows paint to absorb and saturate in unpredictable ways. The colorful, complex surfaces surrounding his texts emphasize the ambiguity and tenuous nature of verbal communication. As the mind goes back and forth between reading the texts and experiencing them as color and shape, language loses its authority, literally melting before the viewer’s eyes. 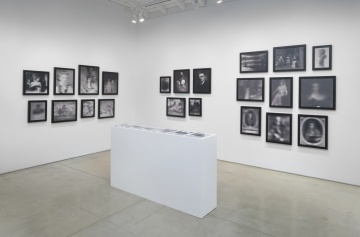 October 23, 2021 - November 13, 2021
Marc Selwyn Fine Art is pleased to present Traces, Allan McCollum’s first exhibition with the gallery and his first Southern California exhibition in 25 years. Allan McCollum lives and works in New York City and has spent over forty-five years exploring how objects achieve public and personal meaning in a world reliant on mass production. He has had more than one hundred solo exhibitions and his works are in nearly seventy major museum collections worldwide. McCollum’s labor-intensive installations are often comprised of many small components and tiny gestures which may seem at first glance to be identical but slowly reveal themselves to be subtly distinct objects. Traces includes two new bodies of work, The Uncredited and The Writer’s Daughter, which explore McCollum’s search for meaning in things that have been lost or forgotten -- screen shots of art from the sets of his late father’s uncredited movie appearances and a child’s free-form imaginary alphabet. By examining, reproducing, and reconfiguring these “traces,” McCollum’s installations deliver a poignant evocation of identity lost and then remade. 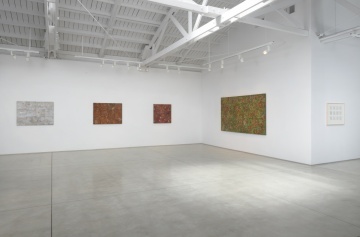 An Archaeology of Place

July 24, 2021 - September 18, 2021
Since the 1970s, Michelle Stuart has been internationally recognized for a rich and diverse practice, including site-specific earth works, intimate drawings, paintings, sculpture and photographs, all centered on a lifelong interest in the natural world and the cosmos. A pioneer in the use of nontraditional media, Stuart brings forth imagery by using organic and site-specific materials in unique ways that expand the notion of what art and painting can be. 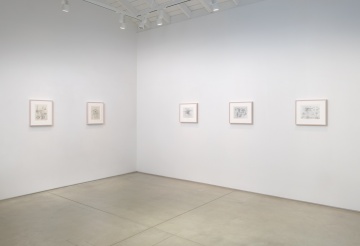 July 24, 2021 - September 18, 2021
Marc Selwyn Fine Art is pleased to present a selection of drawings on graph paper by Lee Bontecou which have never been exhibited outside of the artist’s studio and are exemplary in their staging and ingenuity. This exhibition is presented in cooperation with Bill Maynes, the artist’s sole representative. 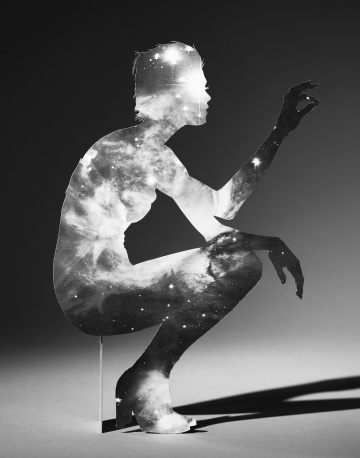 The Body Wants to Live 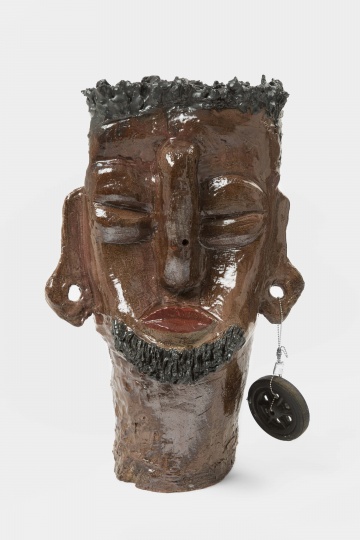 Did I Ever Have a Chance? 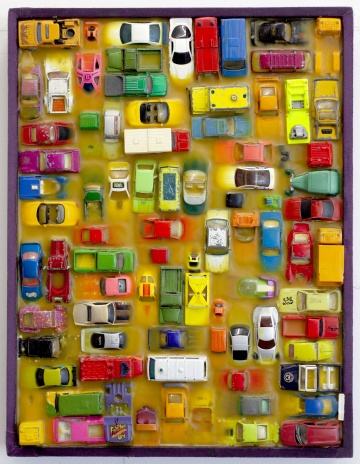 The Language of Gesture

Paintings and Works on Paper from the 1960s

What a Strange Day it Has Been

The Color of Texture