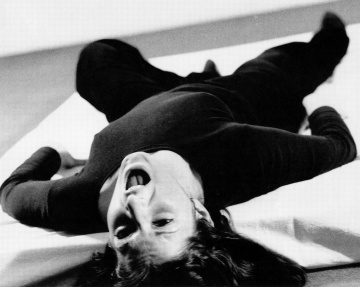 January 22, 2020 - March 14, 2020
The exhibition considers how the elusive medium of sound has carried through art since the early 1900s, when figures of Dadaism, Futurism, and Surrealism first began to experiment with audio. Sounds Lasting and Leaving will flood the gallery's Manhattan townhouse with audible expressions by Marcel Duchamp, Alexander Calder, John Cage, Joseph Beuys, Irma Blank, Vito Acconci, David Hammons, Marina Abramović, Gino De Dominicis, Jennie C. Jones, and Derrick Adams. The exhibition juxtaposes aural and visual works by these artists, many of whom are central to Luxembourg & Dayan's program, while Duchamp was the subject of the gallery's inaugural exhibition in 2009. 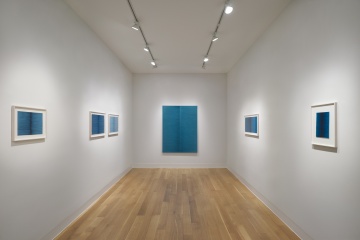 Irma Blank: Painting Between the Lines 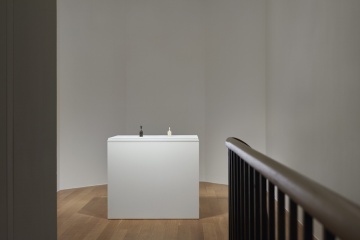 November 11, 2018 - January 12, 2019
Alberto Giacometti: Intimate Immensity Sculptures, 1935– 1945 was the first exhibition in the United States dedicated exclusively to the artist’s cycle of very small human figures created in France and Switzerland during the Second World War. Evolving against a backdrop of unprecedented socio-political upheaval, this unique body of work represents a profoundly transformative phase of Giacometti’s career: at no more than three inches tall and as thin as nails, these works reveal the path that led the artist to the elongated figures for which he became famous in the final two decades of his life. 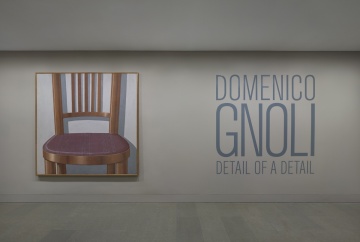 Domenico Gnoli: Detail of a Detail

May 3, 2018 - July 13, 2019
Luxembourg & Dayan mounted its second solo exhibition of work by the Italian artist Domenico Gnoli (1933-1970) in May 2018. The gallery's critically acclaimed 2012 exhibition was the first showing of Gnoli's paintings in the United States since his 1969 debut at Sidney Janis Gallery in New York City. In the 2018 exhibition, Luxembourg & Dayan presented rarely seen masterpieces from the 1960s and extended its ongoing research into the late artist's remarkable career with a fully illustrated catalogue and a new text by Italian curator and writer Cecilia Alemani. 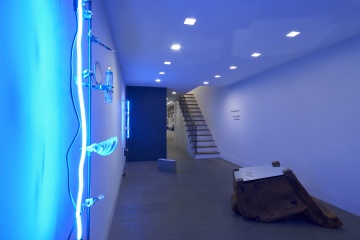 Contingencies: Arte Povera and After

October 23, 2017 - December 16, 2017
Luxembourg & Dayan celebrated the semi-centennial of the Arte Povera movement with Contingencies: Arte Povera and After, an exhibition placing select works by contemporary artists in dialogue with significant Arte Povera works from the 1960s and 1970s. Amid the sociopolitical upheavals of the day, Arte Povera artists questioned the established languages of government, industry, and culture by proclaiming the porosity of the artwork, and exalting in its contingency: suddenly, a potential chemical reaction or simple transfer of energy could comprise the work itself. Contingencies: Arte Povera and After considered the ways in which artists today similarly react to a world in turmoil by rejecting the autonomy of the art object in order to harness, engage, or interrupt systemic flows-whether those are organic, social, or technological-on a distinctly material level. The exhibition was the latest in Luxembourg & Dayan's ongoing, critically acclaimed program devoted to the relationship between postwar Italian art and contemporary culture. The exhibition featured historical works by Giovanni Anselmo, Pier Paolo Calzolari, Luciano Fabro, Jannis Kounellis, Pino Pascali, and Michelangelo Pistoletto. These were placed in conversation with contemporary works by Olga Balema, Elaine Cameron-Weir, Nina Canell, Jason Loebs, and Carlos Reyes. The exhibition was be accompanied by an illustrated catalogue featuring essays by art historian Alex Bacon and Josephine Graf. 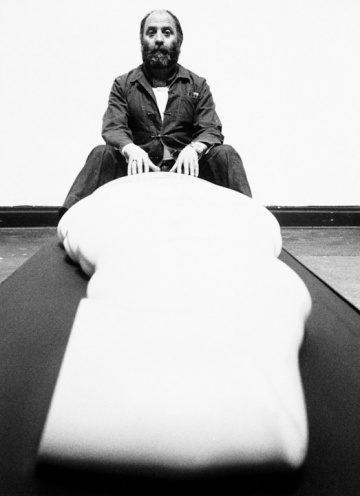 May 5, 2016 - July 1, 2016
César in Context was organized to celebrate the radically inventive and mutable practice of renowned French artist César (1921-1998). By placing a group of his key works in juxtaposition with contemporaneous masterpieces by American and European peers, the show drew attention to the most powerful tool of the artist’s practice: a lifelong penchant for experimentation with an ever-expanding arsenal of materials and techniques. Works on view traced the development of César’s oeuvre through his accumulated language of breakthroughs, which placed him not only within Nouveau Réalisme with which he is most often associated, but also in league with such postwar art movements as Arte Povera, Neo-Dada, and Pop Art. 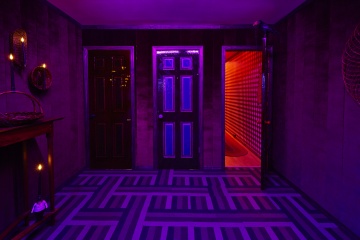 February 26, 2015 - April 11, 2015
In the winter of 2015, Luxembourg & Dayan presented Die Hexe, a solo exhibition by Alex Da Corte. For Die Hexe (“The Witch” in German), Da Corte created a site-specific installation that consumed the gallery’s East 77th Street townhouse, turning it into an implausible cross between a dollhouse and a haunted house. Here visitors took a journey through familiar imagery and obscure biographical references that would mingle, repeat, trade places, and morph into new provocations that invite reflections upon memory, impulse, the stability of knowledge, and what constitutes value in a work of art. Disruptions of authorship and interrogations of an artwork’s unique aura have long been facets of Da Corte’s artistic practice. In Die Hexe, these fascinations were also linked to the unique attributes of the gallery’s wider program. Thinking about Luxembourg & Dayan’s role as a platform for the re-evaluation of historical works of art (particularly under-recognized but pivotal postwar European painting and sculpture), Da Corte was prompted to adopt a similar conceptual framework, studying the very notion of re-evaluating something considered “valuable”. Consequently, Die Hexe suggested a series of Duchampian questions about art’s ability to maintain its life force when removed from an originally intended context. Die Hexe was accompanied by a fully illustrated catalogue featuring a text by Da Corte and a new essay by William Pym. 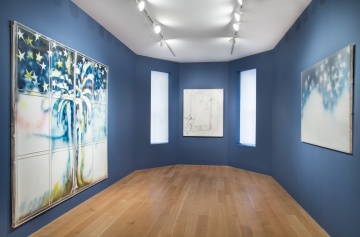 November 6, 2014 - January 10, 2015
On November 6, 2014, Luxembourg & Dayan initiated a new assessment of the contributions of Mario Schifano with Mario Schifano: The ‘60s. By focusing upon the years when his artistic output was at its most intense, the exhibition captures Schifano’s extraordinary range and his ability to encapsulate the charged history and aesthetic contradictions of a nation trying to break free of the recent grip of Fascism and the terrible weight of centuries-old artistic traditions amid rapidly changing socio-economic tides. On view through January 10, 2015, Mario Schifano: The ‘60s was an adapted version of the exhibition Mario Schifano: 1960-1967, recently presented to critical acclaim at Luxembourg & Dayan London. The New York City show was organized in collaboration with Giorgio Marconi, Schifano’s gallerist during the late 1960s, and was accompanied by the catalogue produced for the London show. The book features a new text by Claire Gilman (PhD Columbia University), curator at The Drawing Center, New York. 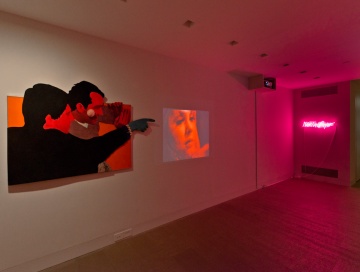 May 11, 2013 - July 13, 2013
In spite of his vital contributions to the European Neo-Avant-Garde, French artist Martial Raysse has been conspicuously under-represented in American art critical discourse. He is perhaps best known for early vivid paintings that appropriate images from advertisements, fashion magazines and familiar art masterpieces. With his signature palette of hyper-saturated colors and his unconventional incorporation of found objects and neon tubing on the surface of canvases, Raysse has been viewed until now through the lens of American Pop art – an altogether inadequate perspective on a seminal postwar artist who departed from Pop’s optimism and fascination with celebrity culture to introduce fresh, albeit disturbing, suggestions of real human confusion and growth behind the shiny surface of all things new. Beginning May 11th 2013, Luxembourg & Dayan presented Martial Raysse: 1960 – 1974, the first U.S. exhibition in four decades devoted to this compelling figure. On view were rare early works by Raysse, including assemblages, paintings, sculptures and experimental films made during the first fifteen years of his career. The gallery presented an example of Raysse’s first Nouveau Réaliste assemblage objects from 1960; a selection of painterly depictions of iconic female beauty; and several poetic works from his much-mythologized ‘Coco Mato’ exhibition of 1974. Through these objects, Luxembourg & Dayan looked beyond the old characterizations of Raysse to investigate more thoroughly the aesthetic and conceptual ruptures that typify the artist’s practice.