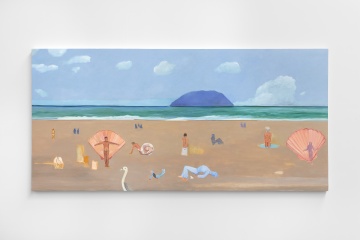 August 11, 2021 - August 22, 2021
Roberto Gil de Montes tests and challenges perceptions of background and foreground, an enveloping blue and green landscape that invites us to see the successive layers of narrative overlaid on a single, idiosyncratic setting. The sea engulfs but also delivers and surrenders its fish and its stories for the extraction of the figures that populate this landscape in a visual idiom of color, receptivity and interaction. With the translucent layering of elements across surfaces and across figures – the veil, the moving shoreline, the water itself – the artist reinstates an equivocation to the oneiric lucidity of some of the scenes, adhering with characteristic fidelity to a reverence for that which remains indeterminate, spontaneous, partial or unspoken. Is a rescue just another form of capture? And in embracing visible forms of ambiguity - wearing a mask, standing in water, hanging upside down or posing behind a veil - do we, in fact, offer up the most explicit renditions of ourselves? 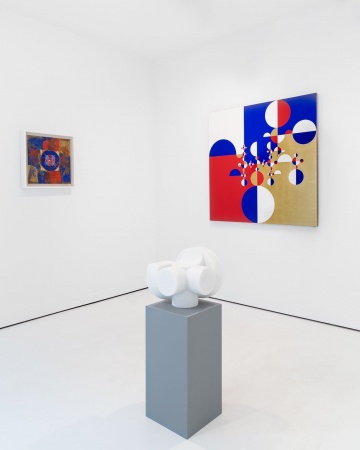 July 15, 2021 - July 25, 2021
kurimanzutto presents works by Gabriel Orozco anchored in the artist’s experimentations with planar boundaries, material interactions, and color, the series continue his ongoing analysis of the circle within nature. Orozco began the works “Folding Stamps” and “Folding Flags”, defining the outward spiraling of linear creases in paper, as expansions within an exploration of geometry. Orozco accents these paper creases with gouache, which he then presses between folds, transferring pigments from one side to another. Through the layering and erosion of transparent and opaque materials, Orozco plays with assemblage, texture, line, and depth, creating richly tactile works that are imbued with a sculptural quality. The artist is committed to a "dual commitment to symmetry and concentricity," as Briony Fer reminds us. The series are extended meditations from Orozco that represents the first of a two part show of Orozco’s work at kurimanzutto.