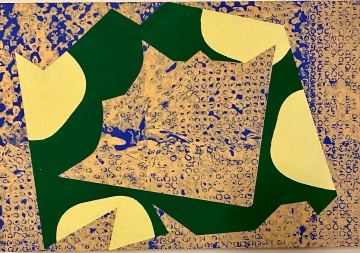 January 12, 2023 - March 7, 2023
Glue Works are the product of invention following personal re-invention precipitated by the Pandemic. In these recent works my repertory cast, color, shape, and texture, play in a smaller theater and operate in a more improvisational and exploratory manner. As always, one thing leads to another, and, inevitably, my changing circumstances led to an interrogation of means and methods. I re-imagined painting, and made a water based medium, a mixture of Elmer’s Glue and bottled tempera. Brushes gave way to scrapers sponges, scissors, and ketchup squeeze bottles. I remained invested in figure/ ground composition, shape nudging its rectangular container, but found a fresh and unusual way to materialize my concepts. There was plenty of wiggle room for serendipity in these meandering works, to set me on a course upsetting habits of mind, and move me in unfamiliar directions. Josef Albers, my teacher at Yale, admonished us to be studious and modest. I believe the scale and scope of these paintings are, in their way, a reflection of his example.
Past Exhibitions 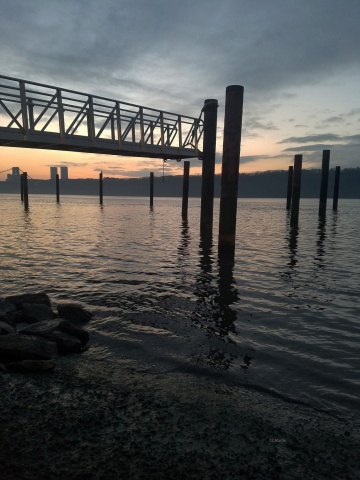 September 8, 2022 - October 18, 2022
Photographer Charles Martin, also filmmaker and writer, says, Metropolis is drawn from such cities as New York, São Paulo, Paris and Montréal, the emphasis is a general sense rather than an explicit essay about any particular one. Daylight, twilight, and electricity luminously shape and paint the cities. Expanses, constructed or patches of nature, are equally urban, and in evidence at ground level and from high perches. Martin says, the views in Metropolis, as in Ferryboat, an earlier exhibition, are less a document than an evocation, an essay, a “think piece” about city, but not enclosed by it, and fascinated by many elements. “Multiple activity, sometimes subterranean, identifies cities and the people who reside and work in them. Nevertheless, writes Martin, the touchstone kernel and outstanding sign of Metropolis, visually, is the blend or interruption of architectural form and scale set comfortably or awkwardly in nature, if only under the sky or amid a body of water (Edifice Canyon, 2022). 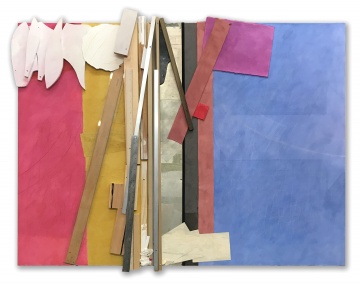 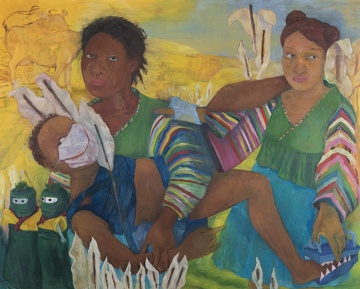 March 4, 2022 - April 5, 2022
In assembling “the usual suspects” for making abstract art, color texture and shape, shape occupies center stage, with color and texture in supporting roles. The main source of inspiration for my recent efforts is drawn from the work of sculptors such as Calder, Arp, and David Smith. Matisse’s cutouts, another of my sources are, themselves, works produced by a sculptural process. My paintings of the past two years each consist of a single irregular shape placed on a textured surface, in a figure/ground relationship. Because paintings are two dimensional, flush to the wall, the viewer is unable to move around them. They are seen head on, necessarily more confrontational than works of three dimensional sculpture. Of a more painterly concern is the tension between the container and the contained. The canvas support, an object with a perimeter, is as much a boundary as it is a geometric counterpoint to its content; naked, intimate, and experienced from a single station point. Victor Kord ROSES

January 7, 2022 - February 26, 2022
Painting the Printed Word, an exhibition of mixed media wall constructions by painter Joan Giordano, reflective not only of her mastery with the brush and the art of printmaking and Japanese papermaking, but likewise her passion for newspaper’s printed text , will open at the June Kelly Gallery, 166 Mercer Street, New York, on Friday, January 7. The exhibition will remain on view through February 26, 2022. Archival publications absorbed with diverse global issues, beliefs and traditions, economics, health, science, and politics are essentials of Giordano’s intriguing large scale sculptural constructions. Giordano’s constructions effect collage media in her pushing of limits and exquisite positioning of materials in arrangements of broad array of surfaces, newspaper rolls and color with found papers, corrugated board, graphite, paint and encaustic. Interwoven with actual international newspapers, the sense of time in both historical and contemporary thought is drawn. 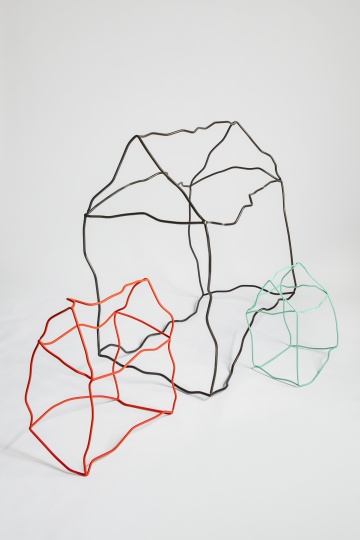 November 19, 2021 - January 4, 2022
Displacement: Sculpture, an exhibition of welded steel sculptures by Rebecca Welz — intriguing explorations that hang from the ceiling and sit on the floor, reflective of her obsession with different lives, places and times in the quest for safety and a sense of belonging, that hang from the ceiling and sit on the floor will open at the June Kelly Gallery, 166 Mercer Street, on November 19. The exhibition will remain on view through January 4, 2022. As well as her concern about issues. Over the years Welz has maintained a distinctive style in which her sculpture challenges the limitations of her material while simultaneously highlighting the fragility of many natural forms. And piques curiosity intrigues provokes viewers’ perceptions. These new sculptures continue that approach. “As I make sculpture with my torches and tools,” says Welz, “I look to find the poetry and rhythms that give glimpses into the world of nature but also beyond, into the concrete and also the spiritual. I work to transform round steel rod, hard and machine rolled, into something that is soft and fluid and looks like it is moving and still growing.” 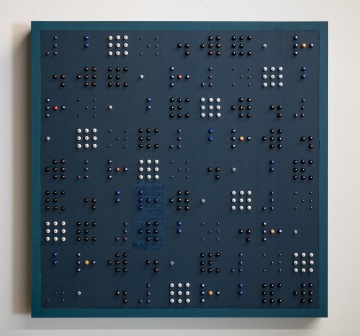 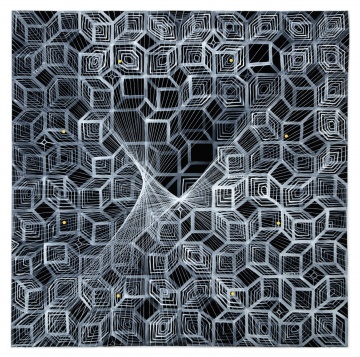 September 9, 2021 - October 12, 2021
Geometry and patterns figure largely in our interpretation of the universe through our senses, science, and cultures. Yet importantly, anomalies appear in both natural and constructed systems. Indeed, the tenacity of much life may be credited to anomalies that could be called flaws. Philosophy, science and observation lead me to contend with the effects of random forces within orderly systems. Using mostly paper and ink, slow processes induce an equanimity I find useful in these times. This series cross-pollinates art, science, and personal experience, and includes references to games, drugs, idioms, and autobiographical elements. Starting with a systematic structure inspired by mathematics, I use visual layering to look at tolerance thresholds for nonconformity or corruption, noting how the mind selectively filters information when seeking authenticity and meaning. Logic, perception, love, and uncertainty drive my curiosity. Reason, intuition and drawing are how I puzzle it out.

July 1, 2021 - July 30, 2021
Seeing In Tempo, intriguing perspectives of landscape by playwright, book author, and photographer Calvin Ramsey will be exhibited in his first U. S. showing with the June Kelly Gallery, 166 Mercer Street. Opening on Thursday, July 1, the work will remain on view through July 30, 2021. Ramsey says photography forces him to see and endow ordinary things with a rhythm, tempo, and purpose. This body of landscape photos shot from the windows of trains moving across the country and Ramsey’s sojourns walking in wanderlust on New York’s Upper East Side coerce one to look at landscapes in a unique way…echoing passage of time. In 2004 while traveling from Atlanta to Valdez, Alaska, through the camera’s eye, Ramsey conceived of landscape not unlike independent film stills intuitively captured while speedily passing. The intermedia of non-representational language with visual elements fascinates as visual poetry. Here, each of Ramsey’s photographs is as a time capsule with viewer mesmerized by image and tempo of the train wheels revolution or urban pattern repetition. Ramsey’s images whether patterns of nature or man convey an impressive sense of fleetingness as in essence of time. Ramsey’s images are not merely digital color photographs but triggers of psyche recognitions. Tempo abides the viewer in the visual sweep of each image as stimuli probing consciousness in which liaison form with remembrance or foretelling. Ramsey is known more as a playwright and book author, having written and produced the musical Bricktop and Ruth and The Green Book, the picture book inspiration for the Academy Award-winning film, The Green Book. In 2004 along his creative path traveling from Atlanta to Valdez, Alaska for the Edward Albee Theater Conference (The Last Frontier Theater Conference) the concept for this body of landscape images was realized. “To see with my own rhythm, tempo and purpose is the firm ground that holds me. My 'dream voice' becomes louder and more visible the more I create through my plays, books, and photography. We all have this living creative muscle within us." Ramsey was born in Baltimore, Maryland and grew up in Roxboro, North Carolina. Having lived in Atlanta, Georgia, Chapel Hill, North Carolina, Martha’s Vineyard, Massachusetts, Santa Monica, California, Oaks Bluff, Massachusetts and Saint Croix, and Saint John U.S. Virgin Islands, he now divides his time between New York City and Sarasota, Florida. Ramsey studied at UCLA. Ramsey’s photographs have been exhibited in the U.S. Virgin Islands and are included in private collections in the United States. Throughout the varied sequences in his career, Ramsey received the Jane Adams award for Ruth, The Green Book, and Belle, The Last Mule at Gees Bend, the Bank Street College Best Book award, Texas Blue Bonnet Award, Forward Magazine Best Book award, ALA Notable Book award, and the Star Review School Library Journal Award. Ramsey was a recipient of the distinguished Dr. Martin Luther King, Jr. Drum Major for Justice Award. Ramsey is a member of the National Arts Club, New York, Sons of The American Revolution, and a former Trustee at the Bronx Museum of Art, New York. 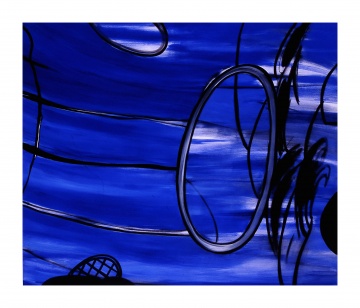 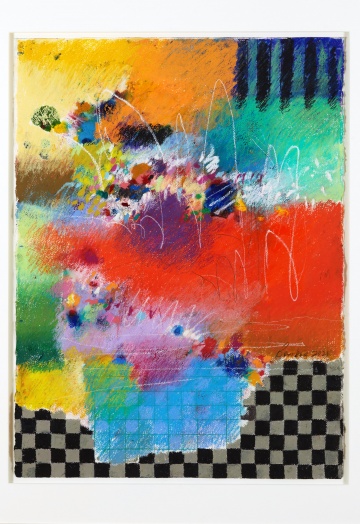 March 26, 2021 - May 4, 2021
As an artist, new information and experiences are vital to my work. The shifting and selection of those bits and pieces of information that are most useful spark and enlighten my creative energies. The need to know compels further exploration in the search for new ways of making “visible.” The result of this pursuit hopefully is continual growth and further development. Making visible, for me, is about the asking of questions. Questions cause search, leading to discovery, resulting in invention. This is a process that invites the discovery of new ways of realizing one’s own sensibility and voice. The kind of information I need as an artist is the result of constant search. The information that I use becomes that vehicle that best enables and encourages discovery, invention and the process of “making visible.” -Moe Brooker 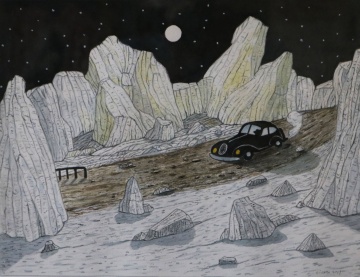 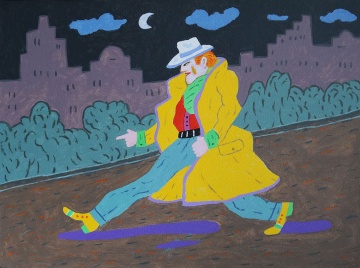 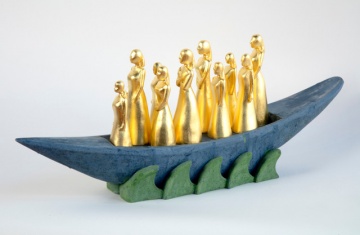 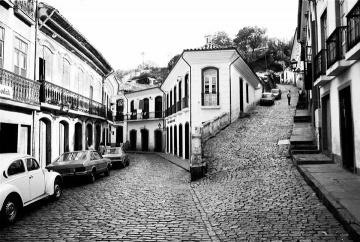 September 11, 2020 - October 6, 2020
Affinity with Brazil:1982-Present, an exhibition of photographs by Charles Martin reflecting near four decades of his absorbed attraction with Brazil - its environment, people, customs, and architecture, will open at the June Kelly Gallery, 166 Mercer Street, on Friday, Sept 11. The work will remain on view through October 6. While Martin says his photographs are usually unplanned and carried out quickly, there is the sense of instantaneous and deep connection with his subjects. Keen perceptiveness is probable primacy for Martin in his observation of everyday reality in Brazil - region after region. 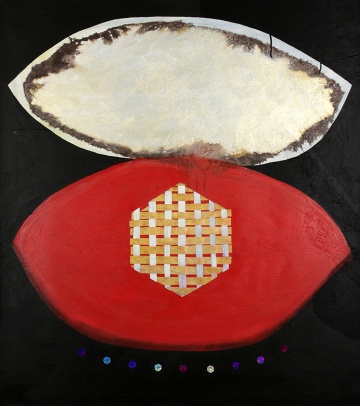 March 6, 2020 - July 31, 2020
My new series of work are inspired by the powerful moments and places I find while traveling. So, in 2018 I went to Puerto Rico and Costa Rica to find inspiration for my new works and help with the relief effort. While there, I visited Playa Negra, a black sand beach, formed from an earlier volcano. Inspired by the magma, I brought some back and incorporated it's rich and mysterious color and texture to integrate it into my latest body of work. Seeing the uniquely colored feather patterns of Costa Rican birds first hand while surrounded by fauna and butterflies left me with an intense colorful feeling that I worked to capture in my paintings. These authentic discoveries and moments help enrich each work with its own story and concept and their own unique world. 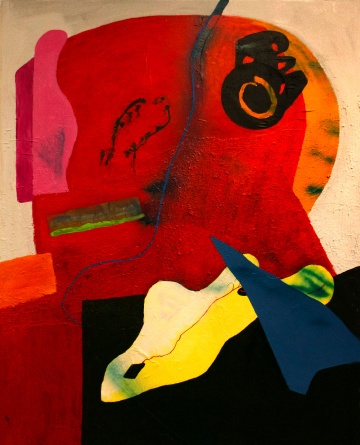 January 17, 2020 - March 3, 2020
June Kelly Gallery is pleased to begin the year 2020 with presentation of Carl E. Hazelwood in his first show at the gallery. Drawings and Collages, recent work in which the visual play between minimalist color and form stimulate subliminally.

Here There and Now