James Barron founded his art business in 1987 as a private art dealer and consultant, and established James Barron Art in 2010. The gallery specializes in modern and contemporary American and European art, including works by Picasso, Matisse, Arp, Giacometti and Pollock, as well as Warhol, Diebenkorn, LeWitt, Mangold, Pepper, Caro and Olitski. Barron is equally adept in guiding both new and experienced collectors. The gallery has an ongoing series of interviews with artists and art historians, reflecting a longstanding tradition of special events.
Current Exhibitions 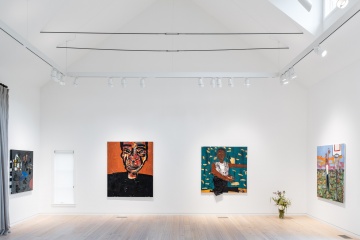 September 10, 2022 - October 22, 2022
Roscoe Hall’s most recent body of work, Government Promises, addresses the “movement of human interaction, employment, education and waiting to be told how one is supposed to live their life.” Hall examines the Black experience in America and the historical tradition of government intervention, often to the detriment of those it is allegedly helping, while touting the promise of progress. Hall uses mixed media and vibrant color to create textured, layered works that communicate not only his personal history, but the larger legacy of African Americans in this country. Roscoe Hall lives and works in Birmingham, AL, where is also a professional chef. He holds a BFA from University of San Diego and an MFA from Savannah College of Art and Design. His work has been included in numerous museum and gallery shows, and is in the permanent collection of museums including the Abroms-Engel Institute for the Visual Arts, Birmingham, AL. Hall is the recipient of the 2022 Peter S. Reed Foundation Grant for Painting. 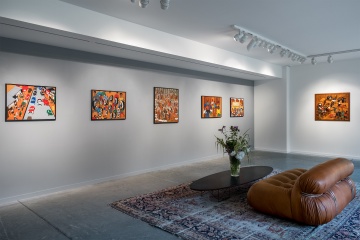 September 10, 2022 - October 22, 2022
“I carried this all my life, all of these things that happened to me... I didn’t realize that by keeping my story inside so long, it would change my life and make me sick.” Winfred Rembert, Chasing Me to My Grave All the works in this exhibition are on loan by private collectors. At age 51, Rembert began carving his memories—including his childhood in the Jim Crow South and his imprisonment following a Civil Rights protest— into both vibrant and painful paintings on leather. Rembert was posthumously awarded a Pulitzer Prize in 2022 for his memoir Chasing Me to My Grave: An Artist’s Memoir of the Jim Crow South. Rembert’s work has been subject to a wave of critical interest, and recent museum acquisitions include the National Gallery of Art, Washington, D.C. and the Blanton Museum of Art, Austin. We wish to express our gratitude to the anonymous lenders to this exhibition.
Past Exhibitions 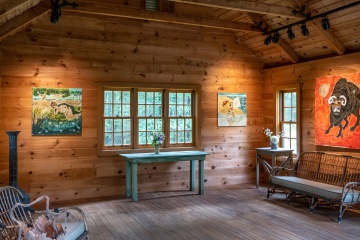 Vera Girivi: At the garden's edge

August 17, 2022 - September 24, 2022
"Covid forced us to limit our movements. I remember whole afternoons walking back and forth along the perimeter of the garden and looking up at the terraces where others did the same. My figures have freed themselves." Vera Girivi 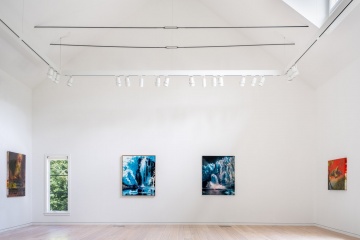 Alexis Rockman: A Molecule from Madness

August 15, 2022 - September 4, 2022
Alexis Rockman is known for his paintings and works on paper that explore the collision between the human induced ecological crisis and its effects on ecosystems and civilization. Initially inspired by his early fascination with the dioramas at the American Museum of Natural History, where his mother, now an urban archeologist, worked in the office of famed anthropologist Margaret Mead, Rockman's work builds on both the history of natural and cultural histories and the history of landscape painting. 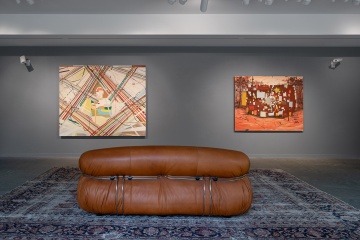 June 3, 2022 - July 16, 2022
Jules de Balincourt: Off the Beaten Path highlights two significant early works. Painted at a moment when de Balincourt's visual vocabulary had come to full fruition, and his work had begun to garner worldwide acclaim, these works encapsulate the pervasive sense of paranoia at the time, when now-proven lies (weapons of mass destruction) were debated. Off the Beaten Path and Other Miscommunications and Untitled (Top or Bottom?), painted in 2006 and 2007, demonstrate de Balincourt’s trademark use of flattened color and space to suggest a sense of alienation engendered by modern society. 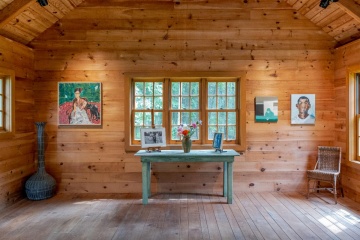 June 3, 2022 - June 1, 2022
“I wonder how many people I've looked at all my life and never seen.” John Steinbeck, The Winter of Our Discontent Works by: Charles Alston Deborah Brown Elinor Carucci Francesco Clemente Richard Diebenkorn Norris Embry Lucian Freud Vera Girivi Merlin James Jeannette Montgomery Barron Jeanne Moutoussamy-Ashe Sara Sebastianis Reza Shafahi John Sonsini Elisabetta Zangrandi "When you sit for an hour and a half in front of somebody, he or she shows about twenty faces. And so it's this crazy chase of, Which face? Which one is the one?" Francesco Clemente 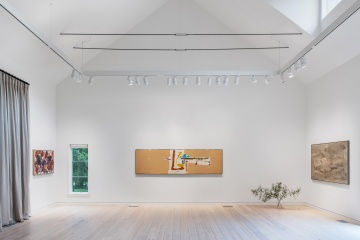 June 3, 2022 - July 16, 2022
We are pleased to exhibit Kikuo Saito: Paint with Drawing, a selection of four superb works from 1980 through 2010. Azalea (1981) and Blue Kettle (1980) exemplify Saito's earlier style, for which he first gained acclaim, combining large expanses of color with fluid, calligraphic flourishes. Later in his career, Saito wove together dense layers of colorful, freewheeling brushstrokes to execute works like Copper Moon (2010). 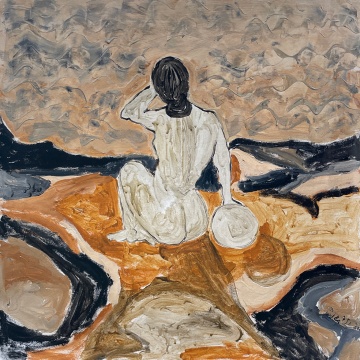 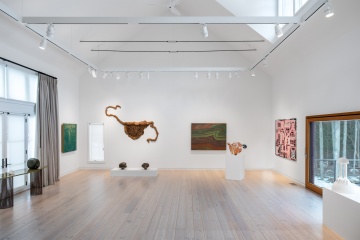 January 28, 2022 - March 19, 2022
Our exhibition explores unexpected visual parallels by artists who, though working decades apart and in disparate mediums, share common artistic threads: the use of earthly materials like clay and wood, the forms and flows of nature, and the tactility of the handmade object. The artists in Earthly Dreams are also all women who paid their dues for many years before gaining broader recognition. We are excited to pair together artists like Betty Woodman and Pam Glick, Ruth Duckworth and Beverly Pepper, and Moira Dryer and Ursula von Rydingsvard, who have not been previously exhibited together, but whose works resonate in their shared conceptual, material, and formal qualities. 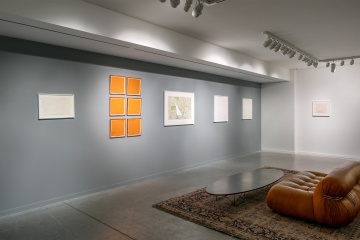 Sol LeWitt: The Truth is Funny

January 28, 2022 - March 19, 2022
Our exhibition focuses on works from Sol LeWitt's R Series, which the artist created by tearing, folding, and cutting. Sometimes inscribed "Not to be sold for more than $100," these works were originally a reaction to LeWitt's growing success with his Wall Drawings, and demonstrate the seeming contradiction of LeWitt's conceptual process and his irreverent wit. 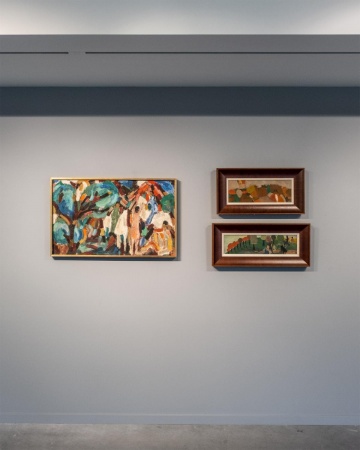 Jan Müller and Bob Thompson: Outside of Time

January 28, 2022 - March 19, 2022
We are pleased to exhibit Jan Müller and Bob Thompson: Outside of Time. Although Jan Müller died several months before Bob Thompson arrived in Provincetown in the summer of 1958, his influence on Thompson's work was profound. In Provincetown, Thompson transformed his work, developing what would become his signature figurative style while looking to Müller's work for guidance. Müller's wife, Dody Müller, told him: "Don't ever look for your solutions from contemporaries— ﻿look at Old Masters." 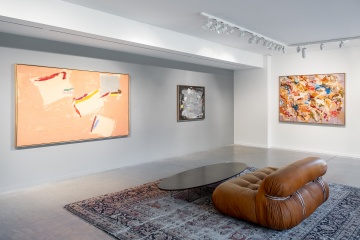 Kikuo Saito: Dancing Across the Surface

December 1, 2021 - January 16, 2022
"His theater work also taught him to paint while the canvas lay horizontal on the floor—as was necessary with the very large backdrops for set... and his choreographic experience taught him to almost dance across the surface while painting, as well as to convey a dancing quality to the marks themselves.” John Dorfman "[Saito developed] a personal version of Color Field abstraction that depended as much on delicately inflected lines and edges as it did on expanses of seductive, saturated hues. Saito’s mature work is characterized by its inventive, often surprising use of color, ranging from frankly gorgeous, richly varied intensities to subdued near-monochromes–as well as by its eloquent drawing." Karen Wilkin "It’s perhaps not an overstatement to say that when we, as viewers, attempt to come to terms with Saito’s invented calligraphy, now plainly visible, now veiled by layers of paint, we recapitulate the artist’s youthful experience of arriving in New York and being confronted by a new language and a new alphabet. The sensuality of Saito’s color and the physicality of his paint handling could be equivalents for his pleasure in overcoming those challenges." Karen Wilkin 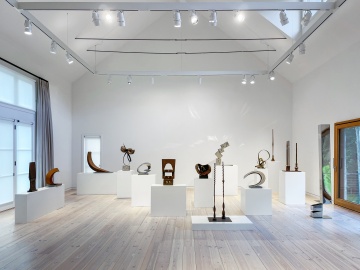 September 8, 2021 - November 12, 2021
Our exhibition spans Beverly Pepper's entire career, with her earliest sculptures from 1960 through some of her final monumental works. Precarious Balance includes stainless steel sculptures from 1968, which are 9 inches tall and weigh 3 pounds, through Octavia, a late masterpiece, which stands over 11 feet tall and weighs 12 tons. Taking a cue from Pepper’s longstanding interest in science, nature, and outdoor sculpture, we have installed many of the works both in the Upper Gallery and in the surrounding landscape. 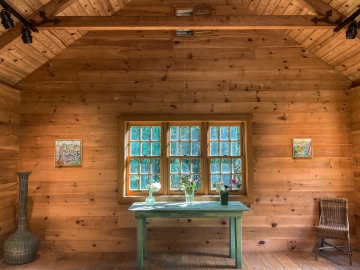 September 8, 2021 - November 11, 2021
"I paint landscapes, but not in a classical way; my vision is inspired by fantasy, wildly full of insects, animals, chimeras, human figures and flowers. Each figure is inserted in a different 'space-time context' – there are multiple horizons, water flows from one environment to another, overwhelming emotions and memories." Elisabetta Zangrandi, interviewed by Departure Magazine We are thrilled to exhibit recent paintings by Elisabetta Zangrandi in the Cabin, including a selection of landscapes, seascapes, and Madonna and Child paintings. 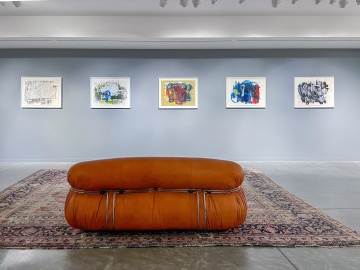 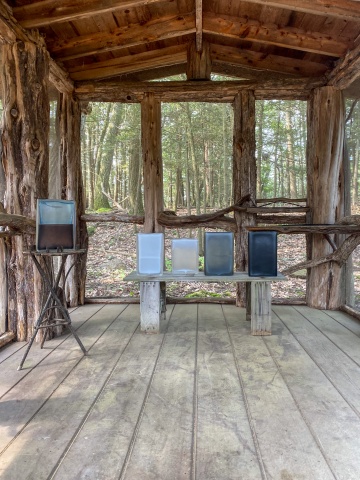 July 9, 2021 - August 27, 2021
We are thrilled to present a selection of Laura de Santillana’s glass works in the Meditation Hut. The unique environment of the Meditation Hut activates these pieces, as striking sunlight and shadows play off the glass, highlighting subtle shifts in its coloration. In an April 2017 interview with James Barron, Laura de Santillana explained the void at the center of these forms: “It starts with the breath. I like working with glass because you put air -- your breath -- inside the material and you close it inside. It’s the moment between inhaling and exhaling. By trapping air inside, some interesting things happen in the process. The accidents are written inside the piece.” In works like Flag XIII (2001), this breath is made visible when illuminated in the Meditation Hut, with pockets of air glowing inside the fields of red, yellow, and green. 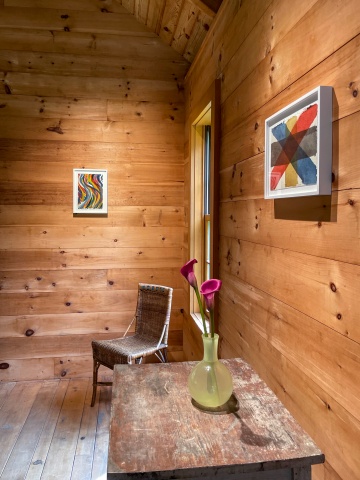 July 9, 2021 - August 27, 2021
James Barron Art is pleased to exhibit Sol LeWitt: Small Gouaches, a selection of LeWitt gouaches from 1985 to 1995, including geometric forms and the artist’s later wavy bands. The works in our exhibition feature LeWitt’s trademark use of red, yellow, blue, and grey/black; each work uses combinations of these fundamental colors to create varying shades and hues within the composition. “LeWitt’s pure reds, yellows, and blues provide once again, in the history of twentieth-century art, the shock of recognizing the unadulterated beauty of these primary hues, a eureka experience we were taught most insistently by Mondrian, but which every generation feels the need to rediscover.” Robert Rosenblum 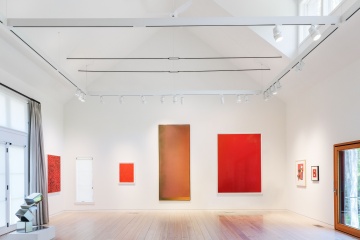 May 21, 2021 - August 28, 2021
The color red is associated with power, representing passion, energy, violence, desire, and courage. Due to scarcity of available pigments, the use of red historically denoted artworks of particular importance. The Red Show explores both artist and viewer's visceral reaction to the color red, through works of various media, styles, and techniques.