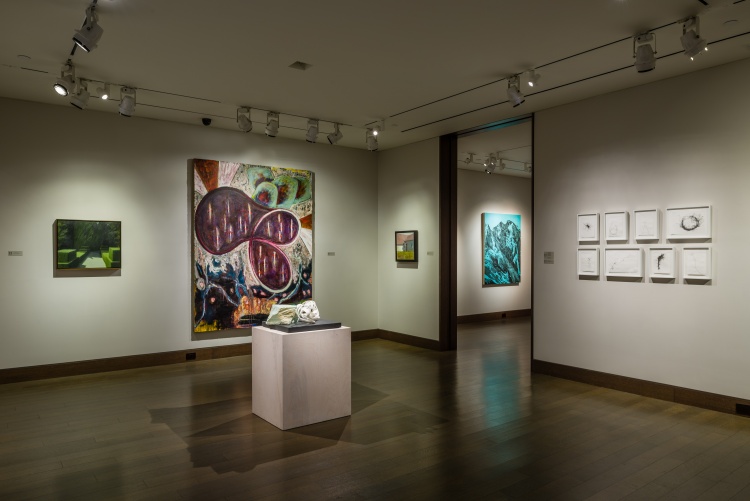 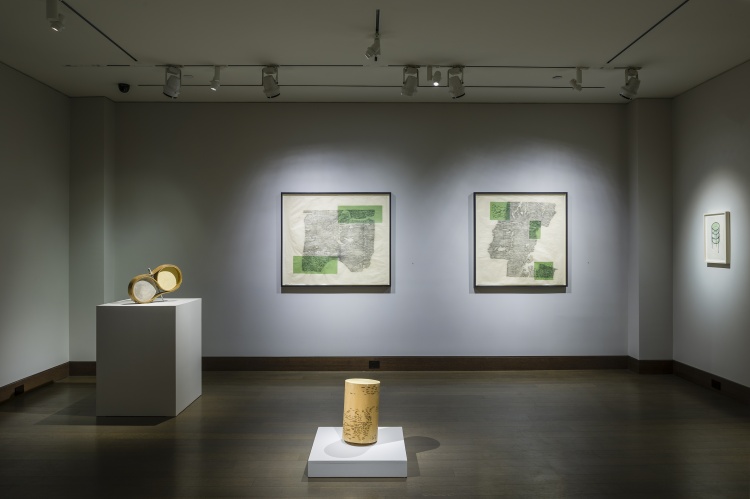 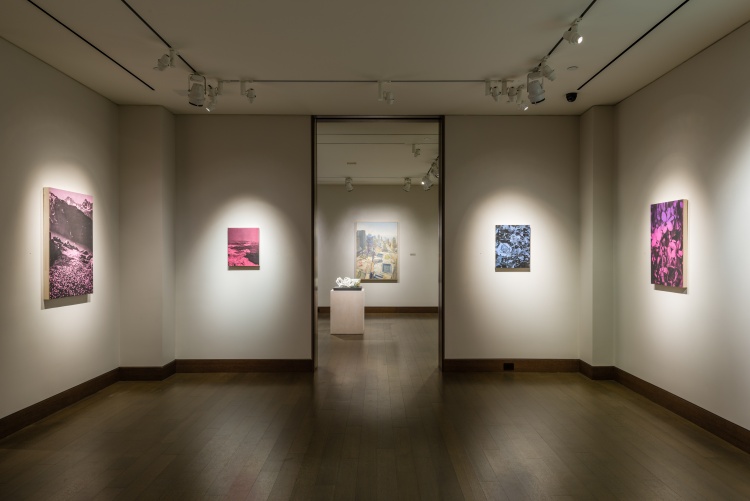 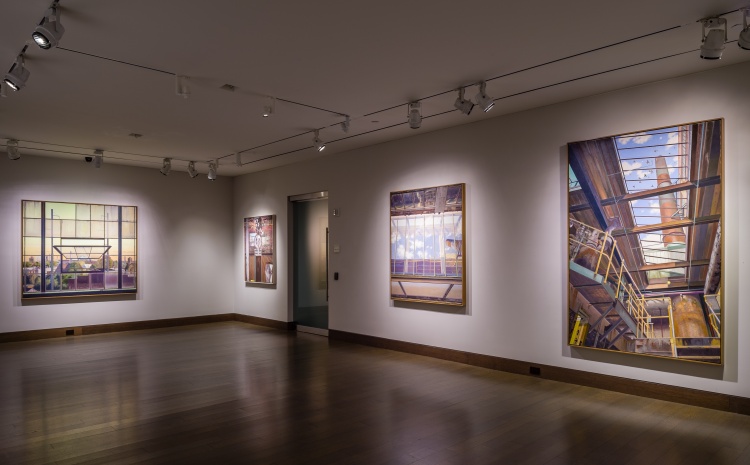 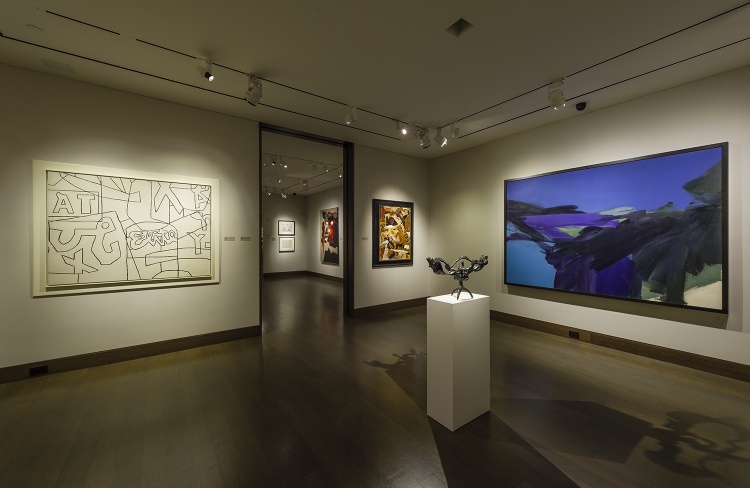 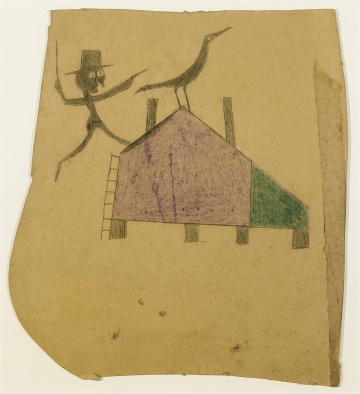 Self-taught Art (also known as "Outsider Art") rejects convention. In that spirit, we have taken a different approach in this e-catalogue, which is presented as a dialogue instead of a list of works with short essays. Frequently asked questions about this often perplexing field are answered by Tom Parker, a Director at Hirschl & Adler and a well-respected authority and lecturer on the subject. Our hope is that this format will provide an easy-to-understand introduction to an area of the market that is often confusing and difficult to approach. Better yet, we hope that it might introduce some to an exciting field that is still in the process of gestation and discovery. History is being made, right now, by the legacy of these works, and the collectors, curators, and scholars that are moved by their visionary and emotional content. For biographical information on the artists presented here, please click through the links that are embedded in the text. 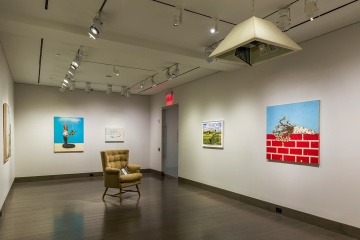 Every Lie to Truth

Trompe l’oeil, at its best, subverts our expectations. When pushed beyond pure verisimilitude, it forces us to shift our perspective both intellectually and physically. "Every Lie to Truth" brings together four artists whose work has this rare ability. For them, trompe l’oeil is a strategy to engage the viewer in the deeper discussions with which they are concerned. Truth, futility, loss, and fallibility are the subjects here, operating beneath the illusory surfaces so skillfully composed. Rachel Granofsky, Kirk Hayes, Colin Hunt, and Meredith James urge us to question what it is that we are looking at and why. In doing so, we accept every lie in order to arrive at the truth behind it. Please use the provided link to view the exhibition's e-catalog. You may also visit the gallery's website to see installation images and to learn more about the artists.
Current Exhibition 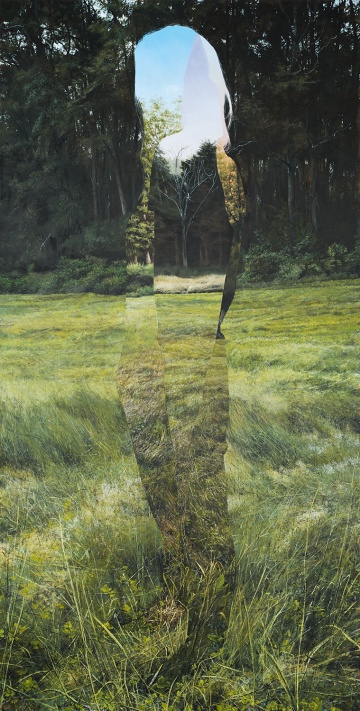 So Much Remains to Be

March 18, 2021 - April 23, 2021
Looking at a painting by Colin Hunt is like watching someone pass through a hole in our consciousness. As the landscape refracts through the sitter’s absence and fills that emptiness, the world remakes itself in the image of what has been lost. For the artist, these human-shaped portals operate between here and the hereafter, providing sublime solace in the shared human experience of grief. In "So Much Remains to Be," his debut solo exhibition with Hirschl & Adler Modern, Hunt collapses the concepts of sitter and likeness, space and time by connecting the formal traditions of portraiture and American landscape painting. The resulting panels explore a collective intuition enveloping memory, humanity and the afterlife. These themes may be heavy, but Hunt’s paintings are tender and optimistic. The people we love and lose are always with us, absorbed and refreshed in the spaces we inhabit. As the exhibition title suggests, there is so much about here and the hereafter still to be realized.
Past Exhibitions 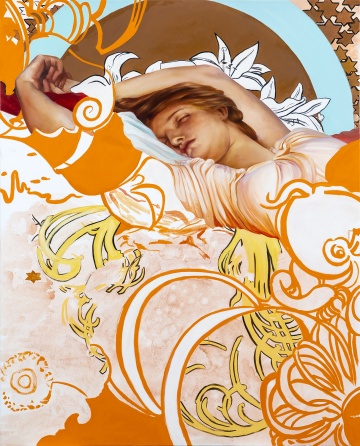 February 10, 2021 - March 12, 2021
Is it discomfort, or excitement, that you feel when you watch these women languidly roust, or subtly drift asleep? Do you happily play the voyeur, seduced by their beauty and the opulence of their surroundings? Do you feel that nagging tug from your mind that you are being watched, as well? Angela Fraleigh has spent her career exploring narrative art’s hierarchical patterns. Keenly observing how images and roles from Western art history intersect with contemporary representation and attitudes, Fraleigh uncovers why certain tropes remain relevant, who they benefit, and how. Hirschl & Adler Modern is proud to present "Fluttering still," the artist’s debut solo exhibition with the gallery. In these ten new paintings, Fraleigh depicts women in liminal states between wakefulness and sleep to perfectly encapsulate today’s social and political dynamics. The women in "Fluttering still" are not here to satisfy any outdated notion of their role nor the viewer’s predatory desire. Fraleigh has awoken them within a new context, wherein their agency exists for their own, and each other’s, sake. In rearranging the images of the past, the artist changes how we see ourselves in the present. Fraleigh, deftly and subtly, empowers her subjects through a variety of strategies. Removing the original art historical context from these figures removes any “traditional” value-based judgments of femininity. In the void, Fraleigh injects additional conceptual layers. In "Shaking to sound the silent skies" and "A pang of livid light," the swirling, abstract patterning surrounding the figures comes from the fin de siècle illustrations rendered by Gerda Wegener and Ethel Reed, two female design pioneers who upended the social norms of their era. Their graphics offer Fraleigh’s figures a haven as well as a lineage. Another key element to Fraleigh’s paintings is her depiction of women together. The “sleeping woman” trope has always been about power, existing to satisfy the voyeuristic viewer. Fraleigh subverts this motif by rendering one woman noticing the other either through her gaze or through contact. This interaction closes a loop wherein there is no room for the viewer. These women are here for each other, and as a result they hold the power. Even routine formal decisions benefit the artist’s concept. While the paintings included in "Fluttering still" range from the intimate (24 x 18 inches) to the grand (90 x 66 inches), Fraleigh’s figures are always life-sized or larger. Treated this way, no woman is diminished. 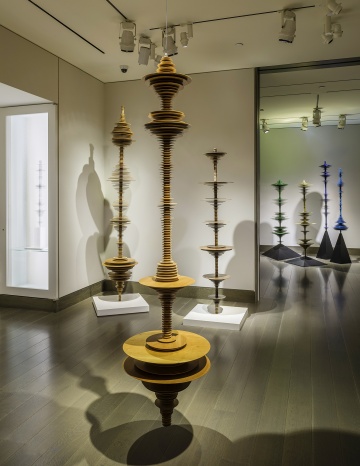 October 1, 2020 - December 11, 2020
As we celebrate 20 years representing Elizabeth Turk, Hirschl & Adler Modern is proud to present an exciting new project, "Tipping Point– Echoes of Extinction," the latest body of work by the internationally-recognized sculptor. While furthering her exploration into the overlap of art and nature, Turk confronts a globally important issue: Extinction. "Tipping Point" employs sculpture, sound, and technology to ask: what role can humans play in the preservation of a species, including our own? Are we at a tipping point? 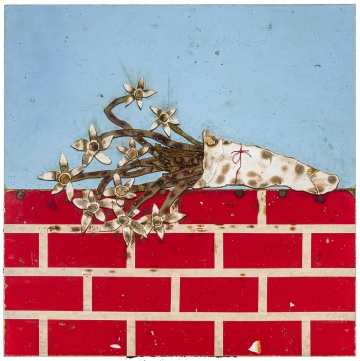 Every Lie to Truth

March 12, 2020 - April 10, 2020
Trompe l’oeil, at its best, subverts our expectations. When pushed beyond pure verisimilitude, it forces us to shift our perspective both intellectually and physically. "Every Lie to Truth" brings together four artists whose work has this rare ability. For them, trompe l’oeil is a strategy to engage the viewer in the deeper discussions with which they are concerned. Truth, futility, loss, and fallibility are the subjects here, operating beneath the illusory surfaces so skillfully composed. Rachel Granofsky, Kirk Hayes, Colin Hunt, and Meredith James urge us to question what it is that we are looking at and why. In doing so, we accept every lie in order to arrive at the truth behind it. 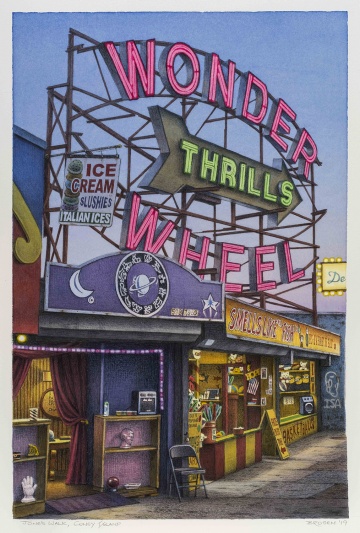 February 6, 2020 - March 6, 2020
From the Upper West Side to SOHO and out to Coney Island, Frederick Brosen paints the honest and over-looked splendor of New York City’s rainy street corners and gritty façades. Fourteen watercolor paintings, ranging in scale from 10 x 9 inches to 45 x 32 inches, celebrate the city which has served as the artist’s career-long muse and lifelong home. These paintings offer quiet moments of reflection amidst the bustle of NYC, and their skilled-handling demonstrates that Brosen is a true master of watercolor.

On a Classic Nitrogen Afternoon

The Masters: Art Students League Teachers and their Students

Winold Reiss Will Not Be Classified.