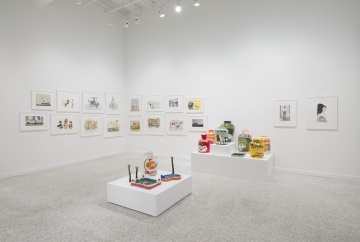 December 17, 2022 - January 7, 2023
GAVLAK Palm Beach is pleased to announce a two-person exhibition with Jake Clark and Konstantin Kakanias. The exhibition showcases the vibrant and whimsical works of both artists, highlighting their distinct styles and perspectives. Each artist draws inspiration from the world around them and uses their work to capture the current moment through reinterpretations of signs, product branding, and logos. Their pieces are accessible and immediately recognizable offering a unique perspective on contemporary culture and icons. The exhibition will be on view from December 17, 2022, to January 7, 2023, and the opening reception will be on Saturday, December 17 from 5-7 pm.

Once Upon A Time 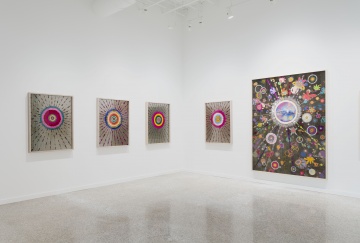 Elegy for the Venezuelan Exile

November 23, 2022 - December 12, 2022
GAVLAK is pleased to present Jose Alvarez (D.O.P.A.): Elegy for the Venezuelan Exile. This show marks the artist’s eighth solo exhibition with the gallery and will feature 13 new works made in 2022 employing his well-known materials of mica, quills, feathers, and acrylic paint to create an elegy for the Venezuelan crisis. An elegy is a lyric poem composed “to praise and express sorrow for someone who is dead”1; a way to aesthetically represent loss and to share it with others going through the same experience. 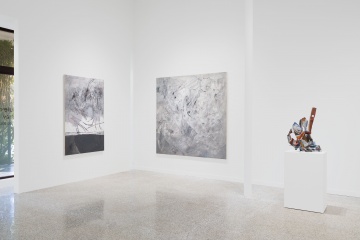 October 26, 2022 - November 20, 2022
GAVLAK is proud to announce Pompeii Gray, the gallery’s first solo presentation of the work of Los Angeles-based artist Iva Gueorguieva. The exhibition showcases three sculptures alongside seven new, ambitiously scaled works in acrylic and collage that mark Gueorguieva’s return to the stretched canvas after a three-year immersion in the making of unstretched and at times double-sided tapestry paintings. The genesis of the Pompeii Gray works was her sudden decision to paint over a massive, colorful abstract painting from 2017 with white gesso and washes of gray. Gueorguieva’s new paintings are works in low relief: layers of muslin, gauze, and pigment combine to blur the difference between the raw edges of strips of fabric and the illusionism of a painted line. Variegated layers of gray form a miasmatic haze that hangs over strata of bright colors and agitated lines that churn beneath the surface to reveal flashes of figures, human and animal. Like the bodies uncovered in the centuries-long process of excavating Pompeii from its blanket of volcanic ash, Gueorguieva’s compositions invite speculation about the relationships of the creatures embedded in the dense layers to one another. Though originally compelled to strip her work from the stretchers, Gueorguieva’s act of generative destruction ultimately inspired her to reconceptualize the canvas as a site of possibility and discovery, like the framed sieve of an archaeologist sifting through the layers of history. Pompeii Gray opens October 26 and will be on view through November 20, 2022 at GAVLAK Palm Beach. To behold And She Cried for the Weekend (2021) is to experience the pleasure of uncovering fragments—buoyant breasts, splayed limbs, and rangy digits—that appear to combine in a scene of conjugal bliss. This sensation is quickly eclipsed by the unsettling possibility that the human figures rendered in anxious, wiry line as a writhing, undifferentiated mass are engaged in violent rather than orgiastic activity. Fingers that initially seemed arched in erotic tension over the belly of a lover now appear to be clawing through layers of gray and bruise-purple viscera. A Slow Congress Under Heavy Gauze (2021) similarly binds the carnal with the moribund; pink and blue aurorae shimmer beneath a shroud of gray to highlight a couple locked in eager congress. Yet the ashen palette and the gauzy texture produced by layers of muslin swaddling the surface of the work mummify this scene of passion and render our curious prying perverse. Wrapped in Animals and Fears (2021) corrupts even the sweet contentment of relaxing with an animal companion, as the stiff figure of a hollow-eyed hooved creature splays in a suffocating posture over where the neck of a vaguely human figure ought to be. The exhibition also features three sculptures from Gueorguieva’s “Talisman Debris” series, which informed her initial impulses to abandon the constraints of canvas stretchers, as well as the omnivorous approach to different media manifest in her latest work. Gueorguieva salvaged hunks of concrete and twists of rebar from a Tampa demolition site and from these humble fragments fashioned compositions that exude a surprising, buoyant liveliness. Vanished Animal 3 (2015) lofts bright tatters of intaglio prints on fabric on a twisted steel scaffold, balanced precariously on a concrete island in a manner suggestive of migration and ruination. Inspired by her own family’s immigration histories, in this series Gueorguieva alludes to the natural and manmade disasters that prompt us to leave life as we knew it behind. In considering the human and animal subjects of Pompeii fated to share their last breaths and long afterlives together amongst the ruins, Gueorguieva envisages the interpersonal exchanges we perform in the thick of unfathomable disaster. The tender gestures of people frozen at the moments of their demise take on a particular sharpness in the contemporary context of a global plague that compels individuals to sacrifice physical closeness as an act of collective care. The companions who cling together within these compositions are at least not alone, and the beauty of their bonds is undiminished even in their wretchedness. Iva Gueorguieva (b. 1974, Bulgaria) lives and works in Los Angeles. Her work is part of the permanent collections of the Los Angeles County Museum of Art, the Minneapolis Institute of Arts, the Museum of Contemporary Art, Los Angeles, and the Museum of Contemporary Art, San Diego. Her recent solo exhibitions include presentations for UTA Artist Space, Los Angeles (2021; 2020); Frederic Snitzer Gallery, Miami (2018; 2016) and Miles McEnery Gallery, New York (2016; 2015; 2014). Her work featured prominently in recent group exhibitions including L.A. Louver, Venice, California (2022; 2018); David Lewis Gallery (2020); and Sophia Contemporary, London (2018; 2017). 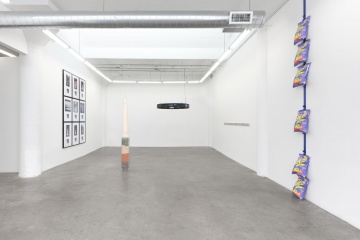 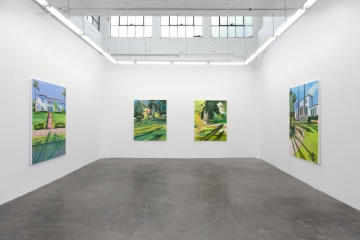 September 10, 2022 - October 15, 2022
GAVLAK is proud to announce Deborah Brown: Flâneuse, the gallery’s second solo presentation of the work of the Brooklyn-based painter Deborah Brown. In new works (all 2022), Brown assumes the role of the flâneuse, the feminine counterpart to the 19th century archetype of the flâneur, a sophisticated and urbane subject whose powers of observation flow from his simultaneous immersion in and detachment from the living organism of the city. The anonymity that enables the flâneur to see without being seen manifests in Brown’s work in the long shadows that spill over the manicured lawns and sprawling driveways of stately Pasadena mansions. In each of the canvases and works on paper that comprise the exhibition, the silhouettes of a person—the artist herself—and a leashed dog cast a sense of alienation and menace over these ostentatious properties and their meticulously curated sensuality. Enticed by the artist’s lush palette and fluid brushwork but instinctively repelled by a host of visual and architectural cues designed to keep them at a distance, the viewer apprehends the subtle means by which the experience of even something as ineffable as beauty is determined by matters of class and access. 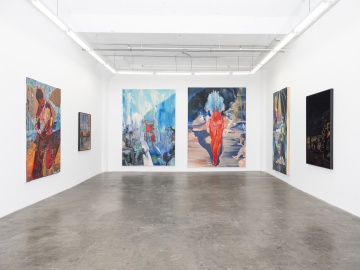 These Are A Few Of My Favorite Things 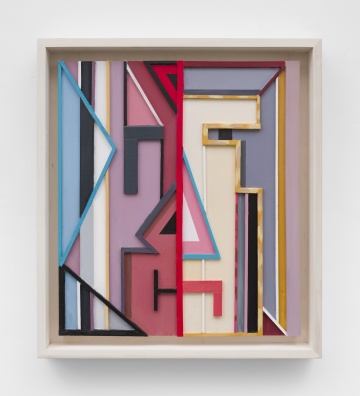 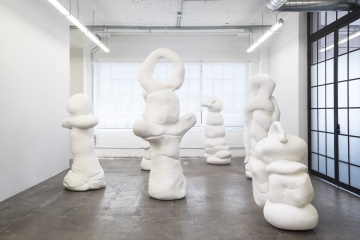 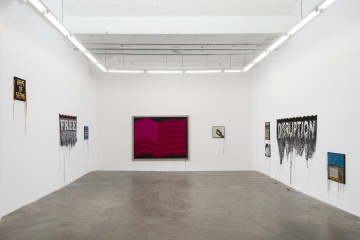