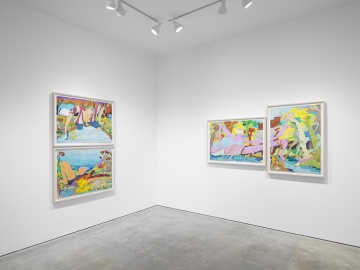 November 3, 2022 - December 17, 2022
Garth Greenan Gallery is pleased to announce Gladys Nilsson: New Works in Watercolor, an exhibition of works on paper at 545 West 20th Street. The exhibition features a selection of the artist’s recent watercolors, all painted between 2021 and 2022. 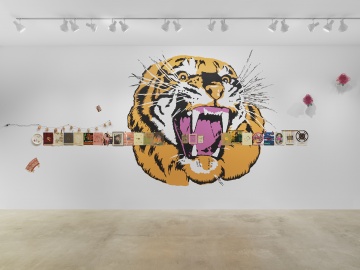 Alexis Smith: Not in Utopia

June 10, 2021 - July 30, 2021
Garth Greenan Gallery is pleased to announce Alexis Smith: Not in Utopia, an exhibition of four monumental installations at 545 West 20th Street. Opening on Thursday, June 10, 2021, the exhibition features a selection of Smith’s immersive wall murals, all created between 1980 and 1982. Works like Tightrope (1980), Cathay (1981), Satan's Satellites (1982), and Fool’s Gold (1982) extend into three dimensions, transforming gallery walls into theatrical backdrops—augmenting her unique form of conceptual art suffused with the imagery of Hollywood and the American West. Measuring nearly 11 by 22 feet, Fool’s Gold was the largest of the three murals included in Smith’s landmark 1982 solo exhibition Satan’s Satellites at Rosamund Felsen Gallery, Los Angeles. By that time, Smith had largely shifted from literary to pulp and pop references—more resonant complements to her iconic imagery. Around the same time, her small-scale collages exploded into large installations and murals, evidencing her growing ambition and confidence. In leaving behind poignant literary observations, her work increasingly relied on her own ability to spot the strange and messy constellations of meaning present in popular culture and cliché. As if embracing Simone Weil’s precept that “on the whole … second class works and below are most suitable for the elite, and absolutely first class works most suitable for the people,” her work became unabashedly pop in its sources and realization. In the painting—a desert scene spotted with cacti and circling buzzards—an old prospector and his burro traverse the arid landscape within a painted trompe l’oeil wood frame, captioned, “Sometimes men went crazy from the heat.” While the phrase might have come from a pulp romance novel, Smith repurposes it, hinting at the prospector’s existential despair and delirium. A white plaster cowgirl is fixed to the painting, so that she rides side-saddle on the donkey. The figure, alabaster white and three-dimensional, is out of place, like a mirage or erotic hallucination. Like Tightrope (1980), Cathay (1981), and Satan's Satellites (1982), the mural confuses the boundaries between painting, sculpture, and installation, mirroring Smith’s playful blending of fiction, myth, and reality. Just as she appropriated her name from a Hollywood actress, Smith was not only inspired by Hollywood illusionism, but actually employed it, working on early renditions of Satan's Satellites with a former CBS set painter. Each mural not only poses questions about the real and unreal within the context of an illusory space like a movie set—a line of questioning which can quickly degrade into abstract scholasticism—but also raises questions about the tectonic influence of myths, fictions, phrases, and images that form the substrata the American psyche. Born in Los Angeles in 1949, Alexis Smith studied painting at the University of California, Irvine. She has exhibited extensively, including shows with Mizuno Gallery (1974, Los Angeles), Whitney Museum of American Art (1975, 1991, New York), Nicholas Wilder Gallery (1977, Los Angeles), Holly Solomon Gallery (1977, 1978, 1979, 1981, 1983, New York), Rosamund Felsen Gallery (1978, 1980, 1982, Los Angeles), Margo Leavin Gallery (1985, 1988, 1990, 1993, 1994, 1995, 1999, 2003, 2009, Los Angeles), Walker Art Center (1986, Minneapolis), Wexner Center for the Arts (1997, Columbus, Ohio), Greenberg Van Doren Gallery (2001, 2004, New York), and Honor Fraser Gallery (2013, 2016, Los Angeles). In 1991, the Whitney Museum of American Art mounted a retrospective of the artist’s work which traveled to the Museum of Contemporary Art (Los Angeles) in 1992. Smith’s work has also been included in many important museum exhibitions, such as American Narrative: 1967–1977 (1977, Contemporary Arts Museum, Houston), Making Their Mark: Women Artists Move into the Mainstream, 1970–1985 (1989, Cincinnati Art Museum), Image World: Art and Media Culture (1989, Whitney Museum of American Art), Sunshine & Noir: Art in L.A., 1960–1997 (1997, Louisiana Museum of Modern Art), and Made in California: Art, Image, and Identity (2000, Los Angeles County Museum of Art). Most recently, Smith was included in Los Angeles: Birth of an Art Capital (Centre Georges Pompidou, 2006), WACK! Art and the Feminist Revolution (2007, Museum of Contemporary Art, Los Angeles), Under the Big Black Sun: California Art, 1974–1981 (2011–2012, Museum of Contemporary Art, Los Angeles), and Physical: Sex and Body in the 1980s (2016, Los Angeles County Museum of Art). Smith’s work is featured in the collections of major museums around the country, including the Hammer Museum, University of California, Los Angeles; the High Museum of Art, Atlanta; the Los Angeles County Museum of Art; the Museum of Contemporary Art, Los Angeles; the Museum of Modern Art; the Walker Art Center; and the Whitney Museum of American Art. A retrospective of Smith’s work is currently being organized by the Museum of Contemporary Art San Diego. Alexis Smith: Not in Utopia will be on view at Garth Greenan Gallery, 545 West 20th Street (between Tenth and Eleventh Avenues), through Friday, July 30, 2021. The gallery is open Tuesday through Saturday, 11:00 a.m. to 6:00 p.m. For more information, please contact the gallery at (212) 929-1351, or email info@garthgreenan.com. 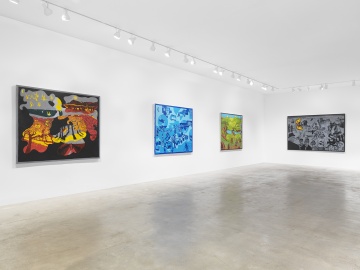 March 25, 2021 - May 22, 2021
Garth Greenan Gallery is pleased to announce Derek Boshier: Alchemy Alchemy, an exhibition of paintings and works on paper by Derek Boshier, all made in 2020. Since his landmark early paintings that helped establish the British Pop Art scene in the 1960s, Boshier has continued to combine popular imagery into visually stunning and intellectually confounding works. Opening Thursday, March 25, 2021, the exhibition is the artist’s first at the gallery. The exhibition includes several of the artist’s paintings, each containing Boshier’s careful clustering of logically contradictory but psychically resonant elements. “I collect images,” says Boshier, “and like to use them randomly.” In spite of the inevitable meanings they produce, Boshier’s juxtapositions are often the products of serendipity. The images, thoughts, and events that present themselves over the course of a day, or in the sequential pages of a magazine, are often non-sequiturs, yet occasionally create lasting and meaningful psychic impact. In his sprawling painting Afghanistan (Christmas Day) (2020), Boshier relates the experience of handling Christmas wrapping paper while watching news of war in snowy Afghanistan. The jarring combination of smiling snowmen next to coils of barbed wire, blood, and bodies again suggests a cascade of meanings: about the extremes of human possibility in peaceful celebration and war, or about the links between our civilization’s polite opulence and its aggressive military adventures. In another painting, Black Dahlia (2020), Surrealism, pop-cultural scandal, and art history collide. The painting memorializes “LA’s greatest unsolved murder.” Boshier depicts Duchamp’s Étants donnés (1946–66), itself thought to be a possible reference to the brutal murder and dismemberment of Elizabeth Short that captivated the public. The suspected murderer was Dr. Hodel, a close friend of Man Ray and an obsessive collector of surrealist art. As in Man Ray’s Minotaur (1934), the victim’s arms stuck out from her truncated torso like the horns of a bull. Dr. Hodel’s own son publicly described the murder as his father’s “surrealistic masterpiece.” In Boshier’s macabre work, black block-like forms meander like a staircase through the composition. A half-dozen men, dressed in mid-century suits, inspect something at their feet. Down the staircase stands a woman in a black dress. In the densely packed drawing Alchemy Alchemy (2020), dozens of medieval alchemists go about their work, dynamically filling every corner of the composition as in a Bruegel or Bosch painting. One alchemist pumps bellows into a raging fire while another pores over manuscripts surrounded by vials and potions. Boshier overlays super-sized wrist watches that populate the scene like flying saucers. The unlikely juxtaposition cries out for explanation. Luxury watches are themselves curious attempts at alchemy. These objects attempt to escape their utilitarian origins along every axis. Their pricing rejects the logic of utility: thousands for a device that tells time (not quite as well as your phone)? So does their needlessly complex engineering: why use complex mechanical gears when you can use a ubiquitous and cheap quartz battery system? The devices are transformed through the ritualistic cooperation of obsessive craftsmen, expert machinists, marketers, and watch enthusiasts. Born 1937 in Portsmouth, UK, Boshier currently lives and works in Los Angeles. The artist first rose to prominence while still a student at the Royal College of Art, featuring in RBA Galleries’ landmark 1961 exhibition Young Contemporaries alongside classmates David Hockney, Allen Jones, R.B. Kitaj, Pauline Boty, and Peter Phillips. Hehas been both prolific and wide-ranging in his artistic production, working in such varied media as painting, drawing, prints, film, sculpture, and installation, among others. Mass audiences were first exposed to his work via The Clash’s 2nd Songbook, as well as David Bowie’s Lodger album cover. His collaboration with Bowie sparked a lifelong friendship, many subsequent collaborations, and a handful of Bowie paintings. He has been the subject of over 91 solo exhibitions at prestigious venues such as: Flowers Gallery (1974 and 1976, London); Texas Gallery (1987, 1989, and 1991, Houston); Galerie du Centre (2003, 2005, 2007, and 2013, Paris); the National Portrait Gallery (2013, London) and Gazelli Art House (2017 and 2019, London). His work has also been included in numerous group exhibitions including: Art and The Sixties (2004, Tate, London); Pop Art: UK (2004, Galleria Civica di Modena, Italy); British Pop (2006, Museo de Bellas Artes de Bilbao, Spain); Pop Art Portraits (2007, National Portrait Gallery, London); and Made in Space (2013, Night Gallery, Los Angeles, Gavin Brown Gallery, New York, and Venus over Manhattan, New York), among others. His work features in numerous public collections internationally, including: the Tate, London; the British Museum, London; the Victoria and Albert Museum, London; the Collection of Her Majesty The Queen, Windsor Castle; the National Gallery of Scotland, Edinburgh; the National Gallery of Poland, Warsaw; the Dallas Museum of Art; the Menil Collection, Houston; the Museum of Art, Ein Harod, Israel; Centro Wifredo Lam, Havana; the Bernardo Museum, Lisbon; the National Gallery of Art, Canberra, Australia; the Yale Centre of British Art, Connecticut; the High Museum, Atlanta; the Brooklyn Museum; and the Museum of Modern Art, New York. Derek Boshier: Alchemy Alchemy will be on view at Garth Greenan Gallery, 545 West 20th Street (between Tenth and Eleventh avenues), through Saturday, May 22, 2021. The gallery is open Tuesday through Saturday, 11:00 a.m. to 6:00 p.m. For more information, please contact the gallery at (212) 929-1351, or email info@garthgreenan.com.