Founded in 2006, Fergus McCaffrey is internationally recognized for its groundbreaking role in promoting the work of post-war Japanese artists such as Sadamasa Motonaga, Natsuyuki Nakanishi, Kazuo Shiraga, and Jiro Takamatsu. The gallery also exhibits the work of emerging and seminal Western artists such as Marcia Hafif, Birgit Jürgenssen, and Richard Nonas.
Tweets by fergusmccaffrey
Artists Represented: 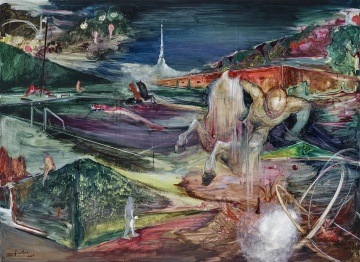 February 12, 2022 - March 26, 2022
Fergus McCaffrey is pleased to present the second iteration of our landmark exhibition, Matthew Barney, Carolee Schneemann, Kazuo Shiraga, Min Tanaka, opening at our New York location on Saturday, February 12, 2022. Originally debuted in Tokyo last year, this two-part presentation centers the exploration of the intersection of dance, performance, painting and sculpture through the theme of gravity; the constant force by which we are bound, against which all art is made. To act against gravity, to dance, to suspend, to wrestle, to take form—this radical group of artists articulates the body as a mode for expression and documentation, developing new systems for capturing immaterial variables such as time and space.

November 11, 2021 - January 29, 2022
Fergus McCaffrey is pleased to announce a solo exhibition of works by American painter Anna Conway. This presentation marks the artist’s most expansive to date, with nearly a dozen paintings tracing the development of her subjects and her stylistic and extraordinary technical experimentation over the past two decades.

Marcia Hafif: From the day a woman...

April 1, 2021 - June 12, 2021
Fergus McCaffrey is pleased to present Sadamasa Motonaga & Natsuyuki Nakanishi: Counterpoints of the Japanese Avant-Garde, an exhibition pairing two of the most important post-war Japanese artists to emerge to the attention of the West in the past generation. The exhibition features the raw and expressive work of Sadamasa Motonaga from the late 1970s, alongside the early 1990s analytical and philosophical gestural paintings of Natsuyuki Nakanishi—critical periods as these senior artists continued to map their respective investigation into material, technique, performance, and culture. 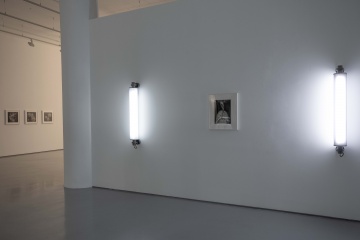 October 30, 2020 - December 31, 1969
For over six decades, Japanese artist Tatsuo Ikeda has explored the human condition, probing the nature of individual experience within larger systems—the government, order of natural beings, universal hierarchies, celestial objects—that circulate, control, and attempt to dominate. Presented alongside Algerian born, French artist Philippe Parreno, a pioneer in perspectival intersections of real and imaginary and lastingly inchoate situations; together, these artists evoke logical aporias and paradoxes within a shared space that reflect a philosophy in which life is full of absurdity and contradiction that cannot be avoided. 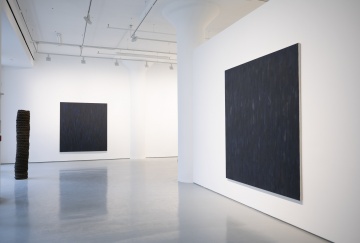 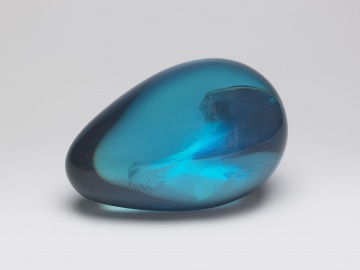 October 30, 2019 - January 18, 2020
Fergus McCaffrey is pleased to present Japan is America, an exhibition exploring the complex artistic networks that informed avant-garde art in Japan and America between 1952 and 1985.

September 5, 2019 - October 19, 2019
Fergus McCaffrey is pleased to announce Ishiuchi Miyako’s representation by the gallery with an exhibition that encompasses over 70 photographs from five series made over four decades, including many early and never-before-seen works. The exhibition will occupy both floors of our 26th Street location and the gallery’s architecture and color scheme have been carefully modified and updated by Ishiuchi. This presentation is the artist’s largest gallery exhibition to date and the first since her celebrated retrospective at The J Paul Getty Museum, Los Angeles, in 2015.

Richard Nonas: all; at once

June 27, 2019 - August 9, 2019
Fergus McCaffrey is pleased to present Richard Nonas all; at once, his sixth solo exhibition with the gallery since 2013. His steel drawings and steel sculpture will occupy the first and second floors of the gallery's New York location.

May 1, 2019 - June 22, 2019
Fergus McCaffrey is pleased to present a solo exhibition of paintings by Viennese artist Martha Jungwirth, on view at the gallery’s New York location from May 1st to June 22nd. This is the gallery’s first exhibition with the artist, and will include four bodies of work that showcase Jungwirth’s distinct approach to abstraction and coloration.

In Light of Shade

February 27, 2019 - April 19, 2019
In Light of Shade, on view at Fergus McCaffrey’s New York gallery from February 27 to April 19, 2019, brings together a group of seven women who mine and explore the areas of indeterminacy between representation and abstraction, vision and blindness, light and shade.

January 24, 2019 - February 23, 2019
Fergus McCaffrey is pleased to present our inaugural exhibitions with Ari Marcopoulos, on view at the gallery’s Tokyo location from January 12 – March 9, 2019 and New York from January 24 – February 23, 2019. Marcopoulos is widely recognized for his photographic work that bridges fine art and street photography; Fergus McCaffrey’s exhibitions allow viewers a glimpse into another side of the artist’s practice with three recent films created in the past two years, including The Park (2017-2018), Monogram Hunters (2018), and Upper Big Tracadie (2018).

November 1, 2018 - December 21, 2018
Fergus McCaffrey is pleased to present a solo exhibition surveying a pivotal decade of bold and experimental work by Sadamasa Motonaga (1922–2011). This exhibition, on view at the gallery’s New York location from November 1 to December 21, 2018, focuses on Motonaga’s 1966–67 visit to New York, and the influence that experience had on his life and work. 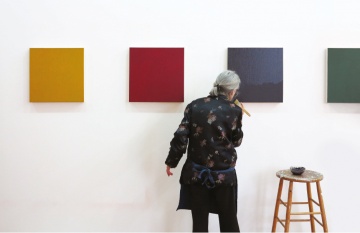 September 27, 2018 - October 27, 2018
Fergus McCaffrey is pleased to present Marcia Hafif Remembered, an exhibition commemorating the American abstract painter who was renowned during her life for her astute engagement with the material conditions and art historical tropes of monochrome painting.

April 25, 2018 - June 30, 2018
Fergus McCaffrey is pleased to present an exhibition surveying the bold and experimental work of renowned Japanese avant-garde collective Gutai (1954–72). Since 2005, the gallery has been at the forefront of promoting understanding of Gutai in the United States and Europe, and our Chelsea gallery has been especially extended for this exhibition to 15,000 sq. ft. to accommodate over seventy largescale works by eleven artists—many of which are being exhibited in the United States for the first time. 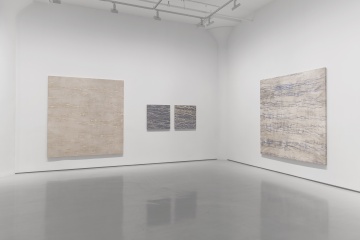 March 1, 2018 - April 14, 2018
Fergus McCaffrey is pleased to present the gallery’s first solo exhibition of new work by Kathleen Jacobs at its Chelsea location from March 1 to April 14, 2018. Kathleen Jacobs: DREMS will present 12 of Jacobs’s expansive canvases, which evoke meditative land- and seascapes.