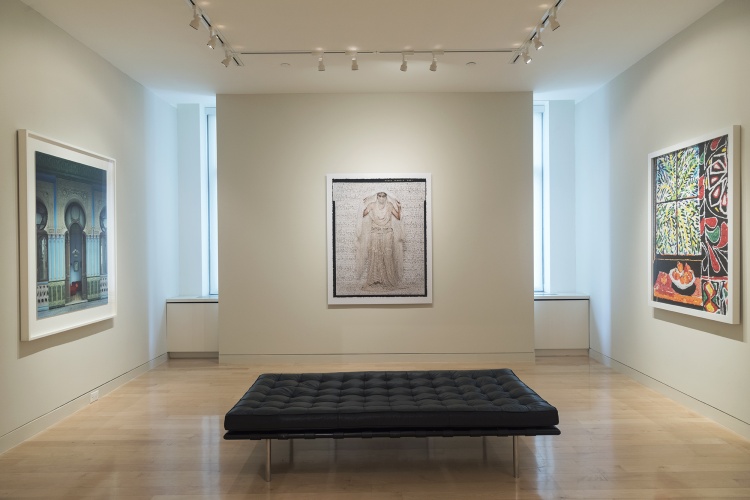 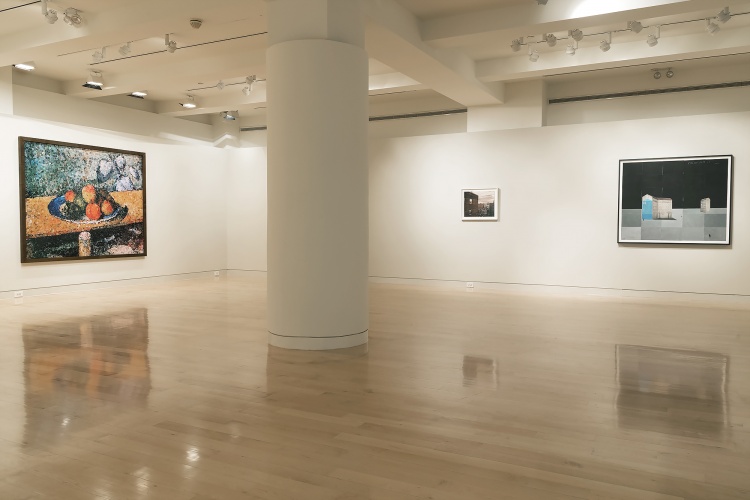 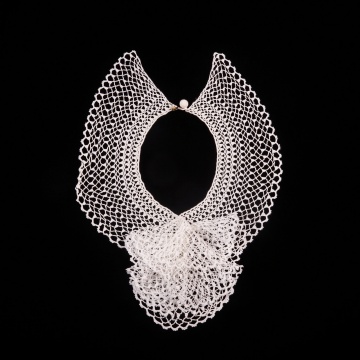 The Collars of Ruth Bader Ginsburg

Elinor Carucci was recently commissioned by TIME to photograph the collection of collars that had become a celebrated and distinguishing feature of the late Supreme Court Justice Ruth Bader Ginsburg over the course of her remarkable career. Carucci was granted special access to a selection of Ginsburg's most cherished collars at the Supreme Court. Her images were published alongside details about each collar from Ginsburg's family, in a feature titled, "Portraits of Ruth Bader Ginsburg's Favorite Collars and the Stories Behind Them," by Tessa Berenson. As Berenson writes, "Ruth Bader Ginsburg was an American icon. The late Justice, who died on September 18, 2020 at the age of 87, was only the second woman to sit on the U.S. Supreme Court, and a trailblazing feminist who enshrined equal protections for women into the law…. Over time, Ginsburg's collars came to symbolize more than just a long-overdue feminine energy on the Supreme Court. To her, each one developed a special significance. The style of the collar sometimes reflected the substance of her work; perhaps most famously, the liberal Ginsburg often wore a bejeweled collar that looked like armor on days she dissented."
Past Exhibitions 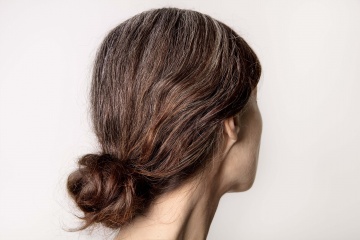 September 10, 2020 - October 22, 2020
Edwynn Houk Gallery is pleased to announce a solo exhibition of Elinor Carucci’s latest body of work, "Midlife." The exhibition will be presented as the gallery’s first online viewing room. In this new series spanning the past eight years, Carucci continues to explore themes of identity, relationships, and the passage of time by documenting herself and her family in their daily lives, a practice that has long been central to her work. Through these deeply personal photographs—which range from moments of intimacy and emotionally charged scenes, to the most mundane tasks of running a household—the artist’s vulnerability and total honesty to her audience invite viewers to recognize their own experiences in hers. Carucci’s images have always been distinguished by an ability to illustrate the universality of human emotions by zeroing in on carefully composed scenes of domesticity. Yet, "Midlife" feels particularly compelling because it chooses as its subject matter a period in life that is rarely acknowledged, much less celebrated. Youthful beauty and the advent of motherhood are familiar motifs in the history of art but the narrative of women’s lives seems to stop there. More than simply shining a light on the midlife years, Carucci presents an intensive and tender investigation into the effects of time on her body, her self-identity in all its complexity, and her relationships with her family members as they each move through new phases of their lives.

February 13, 2020 - May 15, 2020
Edwynn Houk Gallery is pleased to announce a solo exhibition of new work by Sebastiaan Bremer (Dutch, b. 1970). Nocturne marks the debut of several series of portraiture that Bremer has been developing over the course of the past two years, culminating in the monumental triptych, Storm Breaking Over a Valley, 2020. Each unique image in the exhibition is characterized by Bremer’s meticulously hand painted white pointillist dots, however these three new series are distinct in the evolution of the techniques used, as he continues to push the bounds of his hybrid creative process. In Veronica, Bremer furthers his investigation into personal memories, a common thread throughout his oeuvre, by reinterpreting a series of candid pictures of his mother Veronica, taken by his father when she was the same age as the artist. He engages with the silver gelatin prints by altering the surface through hand painting as well as incorporating elements of collage and layering, lending a sculptural quality to the prints. These images are a meditation on family history and relationships, but also function as a vehicle for self-reflection for Bremer, who sees himself in the expressions of his mother. The series of five portraits inspired by the work of Rembrandt are a collection of exquisitely detailed character studies, hand painted onto black gloss paper. In a departure from his earlier work, Bremer has eliminated the underlying source material, revealing his technical mastery in delicately rendering the chiaroscuro faces that emerge from darkness, to create what he describes as “an impossible photograph.” Bremer is particularly drawn to the work of his fellow Dutchman because of the panoply of facial expressions Rembrandt was so brilliantly able to capture, and his ability to illustrate honestly, but with a subtle sense of humor, the wear and tear that human existence takes on each person’s face, regardless of gender, age, or social standing. These portraits as well as the Veronica series can be interpreted as studies of the expression of human emotion, ranging in both mood and tension. Bremer’s exploration of the human condition reaches a crescendo with the triptych, Storm Breaking Over a Valley, an incredibly elaborate opus on the state of the world and the position of humankind throughout history, illustrated through an outpouring of humanity, eras, and souls emerging from the waterfalls and richly textured landscape. The deluge of swirling rapids rushing through the tableau is palpable, as it envelops the cast of figures taken from the pages of history. Bremer again employs stylistic references to the etchings of Rembrandt, as well as Leonardo da Vinci’s depictions of water, evoking the heightened sensibility of an Old Master painting. Painstakingly hand painted over a two-year period, the triptych is a symphony of visual information and a feat of obsessive dedication and curiosity. Invoking the sense of wit that he so admires in the work of Rembrandt, Bremer reminds us with this imagined scene that predicting the end of time is as old as history itself, and it is our hubris that allows us to believe that the times we live in are really it. Sebastiaan Bremer studied at the Vrije Academie, The Hague and Skowhegan School of Art and Sculpture, Maine. The artist currently lives and works in Brooklyn, New York. His work has been the subject of three major catalogs: Monkey Brain (2003), Avila (2006), and To Joy (2015), and has been exhibited in such venues as the Tate Gallery, London; the Brooklyn Museum of Art, New York; The Gemeentemuseum, The Hague; and the Aldrich Museum, Connecticut. Bremer’s work is in the permanent collections of institutions including the Museum of Modern Art, New York, the Los Angeles County Museum of Art, Los Angeles, and the Victoria and Albert Museum, London. Image caption: Sebastiaan Bremer, Storm Breaking Over a Valley, 2020. © Sebastiaan Bremer/ Courtesy Edwynn Houk Gallery. 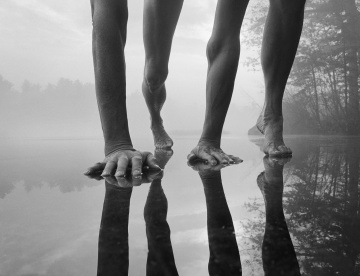 January 4, 2020 - February 8, 2020
Edwynn Houk Gallery is pleased to announce Arno Rafael Minkkinen: Fifty Years, an exhibition of black and white photographs commemorating the artist’s half a century long career. Selected from his expansive oeuvre, these fifteen images encompass every decade since Minkkinen began photographing in the early 1970s and span the globe, featuring his native Finland, his later homes of New York City and Andover, Massachusetts, as well as locations ranging from China to Portugal. Celebrating fifty years since Minkkinen embarked on his epic exploration of the central theme of his nude body in nature, the exhibition illustrates his work’s continuous capacity for innovation and self-reflection. Relying purely on the primal abilities of his own body, Minkkinen contorts his limbs into gravity defying poses that often appear physically impossible. The artist never digitally manipulates his negatives and works alone using a simple 9-second shutter release, affording him just a few moments to pose for each photograph. The resulting images are characterized by stillness and tranquility, but the process can be quite difficult or even dangerous, as Minkkinen pushes the limits of his body to capture each shot. Deeply inspired by nature, Minkkinen allows the organic forms in his outdoor surroundings to guide the compositions of his images and the shapes his body assumes. He creates surreal self-portraits by seamlessly blending his own body with the natural elements so that each photograph becomes a visual puzzle of where the landscape ends and his limbs begin—as he “makes communion” with nature. His works are a reminder of the fickle nature of perception, and his process is a meditation on the interconnectedness of humans and nature, and how we experience the world around us through our physical bodies. Minkkinen’s photographs are at once visceral and poetic, each one a new discovery in what he describes as his “continuity of vision.” Arno Rafael Minkkinen received his MFA from the Rhode Island School of Design in 1974 and is a professor emeritus at the University of Massachusetts Lowell. The recipient of the 2006 Finnish State Art Prize in Photography, the Lucie Award for Achievement in Fine Art in 2013, and a John Simon Guggenheim Memorial Foundation Fellowship in 2015, Minkkinen has also been knighted by the Finnish government with the Pro Finlandia Order of the Lion medal. Minkkinen’s work has been the subject of eight solo monographs—most recently Minkkinen, a 300-page retrospective of his career released in November 2019—and has been exhibited internationally with over 100 solo shows and nearly 200 group exhibitions in galleries and museums worldwide. His photographs are in the permanent collections of the Centre Georges Pompidou, Paris; Museum of Modern Art, New York; Musée d’art moderne de la Ville de Paris; Museum of Fine Arts, Boston; Museum of Fine Arts, Houston; High Museum, Atlanta; Maison Européenne de la Photographie, Paris; Kiasma-Contemporary Art Museum, Helsinki; Museo Nazionale Alinari della Fotografia, Florence; and the National Gallery of Canada, Ottawa. 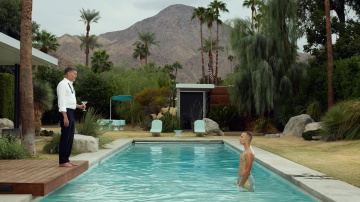 Brassaï | Paris by Night: Vintage Prints from the Collection of Madame Brassaï

Summer Show: A selection of gallery artists and new acquisitions 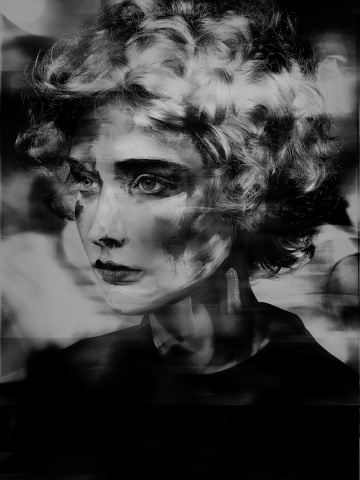 March 2, 2018 - March 31, 2018
Edwynn Houk Gallery, New York is pleased to announce an exhibition of Valérie Belin’s ­­most recent series, Painted Ladies, for the artist’s fourth exhibition at the gallery. The exhibition of eight large-scale black-and-white photographs will be on view 2 – 31 March 2018. Over the past two decades, Valérie Belin has created a body of work that challenges and manipulates the indexical nature of the photographic surface to explore ideas of beauty, artifice, and illusion. Painted Ladies continues Belin’s fascination with the human body as a powerful vessel for abstraction and projected meaning. Inspired by early twentieth-century expressionist painters, Belin collaborated with make-up artist Isamaya Ffrench to paint models with various brushes in the manner of initiatory tribal rituals. These brushes lend their names to the individual titles of the works, such as Lady Round Brush, Lady Pastel, and Lady Inpainting, and also mirror the equivalent digital retouching tools found in the image-processing software that Belin employs.