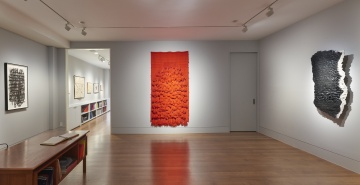 July 19, 2021 - September 3, 2021
The exhibition will be led by Sheila Hicks’s Prayer Rug (1972) and focus on artists’ explorations of texture across multiple media. Recent work by Olga de Amaral, Ursula von Rydingsvard and Elsa Hansen Oldham will also feature. This cohesive collection of works by artists active from the late 1950s through the present day celebrates the diverse use of texture and fabric. 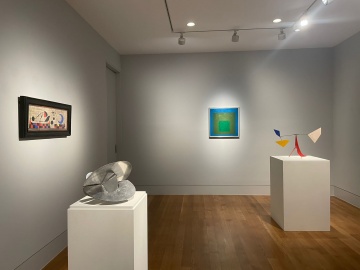 Miró: The Wall of the Moon

May 6, 2021 - June 30, 2021
Miró: The Wall of the Moon presents Joan Miro’s superb maquette for one of the ceramic murals commissioned for the UNESCO plaza in Paris, Mur de la Lune (The Wall of the Moon), alongside a complementary selection of Mid-Century paintings and sculpture. Painted in 1955, the maquette features the celestial shapes that define Miró’s most celebrated paintings, and retains its original, vibrant colouring thanks to its exceptional state of preservation. Miró presented the painting to the architect Marcel Breuer, at the completion of the UNESCO project, and it has remained in the Breuer family collection ever since. Miró was one of eleven artists awarded a commission to provide a decorative scheme for the new UNESCO headquarters. In September 1946, the UNESCO Preparatory Commission relocated from London to Paris, taking up residence in a building designed by Hungarian-American Breuer – the Bauhaus-trained architect responsible for, among other landmarks, the former Whitney Museum building (currently housing the Frick collection) on the Upper East Side – along with Pier Luigi Nervi of Italy and Bernard Zehrfuss of France. In partnership with his long-term collaborator, ceramicist Josep Llorens Artigas, Miró designed two monumental murals for the building’s plaza: Mur de la Lune (The Wall of the Moon) and Mur du Soleil (The Wall of the Sun). Alexander Calder, like Miró, was among the artists selected to contribute to the UNESCO project. It is therefore fitting that, alongside Mur de la Lune, Dickinson will show one of Calder’s table-top-sized stabiles, as he dubbed his standing mobiles, with forms cut from sheet metal and painted in the artist’s signature primary palette. The exhibition further references the Bauhaus School with Study for ‘Homage to the Square: Late Silence’ (1960) by Bauhaus graduate and professor Josef Albers. These works are joined by one of Brazilian Neo-Concrete artist Lygia Clark’s Bicho sculptures and Conrad Marca-Relli’s Untitled (c. late 1940s). Miró: The Wall of the Moon will be on view at Dickinson New York, 980 Madison Avenue, from 6 May through 30 June. 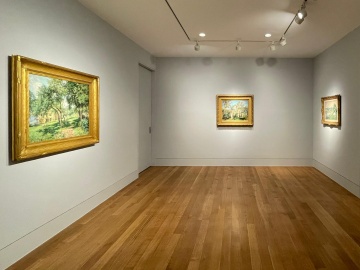 March 21, 2021 - April 30, 2021
To mark the arrival of Spring, Dickinson New York presents In Bloom, featuring oil paintings and works on paper by leading names in American Impressionism including Metcalf, Hassam, Sargent and Chase. 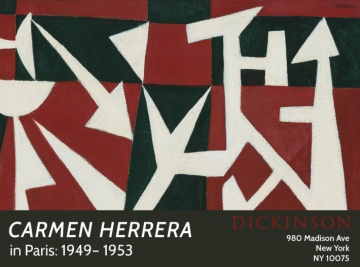 November 2, 2020 - January 8, 2021
Dickinson New York presents an important, privately-owned collection of works by Cuban-American abstract painter Carmen Herrera (b. 1915). The eight paintings date from between 1949 and 1953, a period when Herrera was living in Paris and responding to the European avant-garde.