Founded in 2013 by Nicole Russo, Chapter NY is committed to supporting artists at various phases in their careers, by providing first solo shows and offering a platform for specific investigations within more established practices. By focusing on solo-presentations and working closely with each artist, Chapter NY helps realize tightly envisioned exhibitions that foster artistic exploration and growth.
Artists Represented: 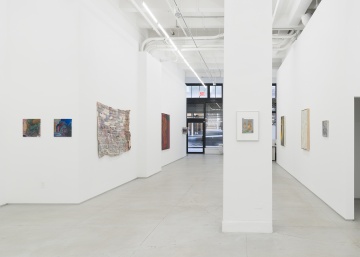 September 9, 2022 - October 8, 2022
One night … I awoke in a room in which a cage and the bird sleeping in it had been placed. A magnificent error caused me to see an egg in the cage instead of the bird. I then grasped a new and astonishing poetic secret, because the shock I experienced had been provoked precisely by the affinity of the two objects, the cage and the egg, whereas I used to provoke this shock by causing the encounter of unrelated objects. –René Magritte The title of the exhibition, Elective Affinities, originates from an 18th century scientific term describing the merging of disparate chemical compounds. The phrase took on greater metaphoric meaning in Johann Wolfgang von Goethes’ 1809 novel of the same name, in which Goethe applied the theory to unlikely romantic partners. In 1932, it appeared again in the title of a painting by René Magritte that prominently features a large egg inside of a birdcage. The subject of the painting came to Magritte in a momentary hallucination and prompted his realization of the poetic value in pairing two related objects despite their immediate incoherence. Chapter NY presents a group exhibition featuring artworks made within the past year that express an elective affinity to one another. Although the works in the exhibition display a wide range of mediums and subjects, they are latently connected through the artists’ shared experience of the present moment. The artists concurrently delve into their own memories and dreams to imagine new forms and subjects. Some allow literary and filmic references to guide their practices, while others repurpose everyday materials and objects to build unusual surfaces. Together, their works showcase the predilections of a moment in time, notably synergistic despite their formal and conceptual disparity. Quoted in Paquet, Marcel, Magritte. Cologne, Germany: Taschen (2006), p. 26. 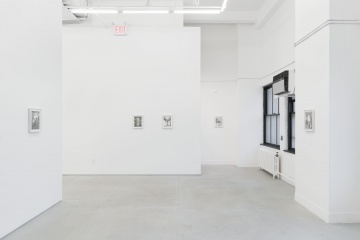 September 9, 2022 - October 8, 2022
Chapter NY is excited to announce, High-Rise, Cheyenne Julien’s second solo exhibition with the gallery, which will debut a series of equally scaled drawings depicting elevator scenes. Julien’s practice explores cultural and collective histories reflected through her own lived experiences. Often derived from memory, Julien’s paintings and drawings portray intimate subjects inspired by her closest relationships and life in New York City. Her work highlights the interdependency of bodies and their contexts, asserting the power of built environments to dictate racial perception. For High-Rise, Julien focuses on the elevator as a site for communities to converge and interact. The artist grew up in a high-rise apartment building in the Bronx where elevators played a central role in her daily life. Due to a lack of maintenance, they were regularly out of service, both inconveniencing the building’s residents and accentuating their importance. Her work spotlights these often overlooked, yet highly frequented spaces, reimagining the brief encounters that bring people together within them. The title of the exhibition references J. G. Ballard’s 1975 novel, High-Rise, which examines class divisions within a luxury skyscraper, centering elevators as a site where tensions appear. Julien’s elevators enclose a wide range of interpersonal dynamics within their claustrophobic interiors. Romantic partners lean affectionately into one another, parents intuitively wrap arms around their children, individual passengers peer into their cellphone screens, and in one scene, white passengers cower away from a black woman with her dog. Julien’s narrative vignettes extend beyond the passengers, focusing on the architectural settings and inanimate objects that impact their daily experience. Historically, the advent of elevators facilitated a cultural progression towards a lifestyle of convenience and comfort. They have played a crucial role in the trajectory of urban development, allowing cities to expand vertically to greater heights. In Julien’s works, the upward ascent of her passengers metaphorically enacts a form of racial uplift. She emphasizes glimmering light throughout her compositions—particularly reflected in the metallic surfaces of the elevators—to suggest the proximity of a divine presence. Julien, however, tempers this optimism by casting sharp beams of light onto her subjects and settings. Their shapes mimic searchlights and maintain an eerie sense of surveillance that grounds her scenes in the darker side of reality. Cheyenne Julien (b. 1994, Bronx, New York) lives and works in the Bronx, NY. She received her BFA in Painting at the Rhode Island School of Design in 2016. She has had solo and two-person exhibitions at Chapter NY, New York; Smart Objects, Los Angeles; and Water McBeer, New York. Julien’s work has also been included in group exhibitions at Hotel Europe, Zurich; Carl Freedman Gallery, Kent, GBR; Anton Kern Gallery, New York; the Schlossmuseum, Linz, AUR; The Jewish Museum, New York; Gladstone Gallery, New York; Public Art Fund, New York; the American Academy of Arts and Letters, New York; The Harvey Gantt Center, Charlotte, NC; Mitchell-Innes and Nash, New York; Museum of Modern Art, Warsaw; Gavin Brown’s Enterprise/Unclebrother, Hancock, NY; Karma, New York; Loyal Gallery, Stockholm; and White Cube Bermondsey, London. Julien’s work is included in the collections of the Hirshhorn Museum, Washington D.C.; Institute of Contemporary Art, Miami; RISD Museum, Providence; University of New Hampshire Museum of Art, Durham, NH; and the Whitney Museum of American Art, New York.
Upcoming Exhibitions

image as a burden, death as a womb 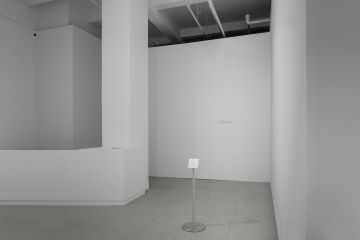 The Depression of Belgium

July 5, 2022 - August 19, 2022
Chapter NY is pleased to present The Depression of Belgium, a new work by Adam Gordon and his third solo exhibition with the gallery. Each day there are two different phases of the work. Phase 1 is on view from 11am to 4pm. Phase 2 is on view from 4pm to 6pm. The exhibition is on view from July 5 through August 19, 2022, at 60 Walker Street, Monday through Friday, from 11:00 am to 6:00pm. Adam Gordon (b. 1986, St. Paul, Minnesota) lives and works in Jersey City, NJ. He has had solo exhibitions at Gandt, Astoria; ZERO…, Milan; Chapter NY, New York; The Power Station, Dallas; Hunter/Whitfield, London; and Night Gallery, Los Angeles. Gordon’s work has been included in group exhibitions at Kunsthalle Wien, Vienna; Project Native Informant, London; New Gallerie, Paris; Andrew Kreps, New York; National Exemplar, New York; and Boates Fine Arts, São Paulo. His work is currently on view in the Whitney Biennial 2022: Quiet as It’s Kept at The Whitney Museum of America Art, New York through September 5, 2022. He has upcoming solo exhibitions at ZERO…, Paris in 2022 and Project Native Informant, London in 2023. 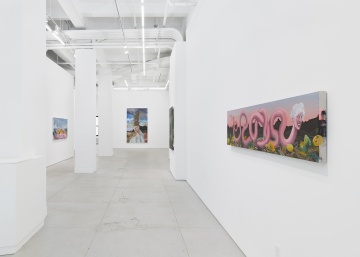 May 13, 2022 - June 18, 2022
Chapter NY is excited to announce Cabeza de mango, Dalton Gata’s second solo exhibition at the gallery. In his newest series of paintings, Gata expands his characteristic fantastical world, devoting most of his canvases to portraits of male figures. Although their strikingly chiseled features appear distinctly masculine, they merge with animal and insect forms to create unrecognizable hybrid species. Through elements such as stylized hairdos, bulging muscles, and exaggerated facial expressions, Gata explores the vast spectrum of appearances, continuing to celebrate the beauty in diversity. For Cabeza de mango, Gata presents various types of mangoes in different stages. He associates mangoes—his absolute favorite fruit—with childhood memories growing up on a fruit farm in Cuba. He does not discriminate against those that are already rotten or those that have not yet ripened, prominently presenting each mango with a sense of individuality in the company of his imagined characters. In The forgotten banquet, Gata displays an array of mangoes on a lavishly draped table within a vast landscape, evoking a sense of grandeur and nostalgia. Reimagined throughout the exhibition, Gata’s serenely vacant landscapes provide ample space for his subjects to roam free and express themselves. 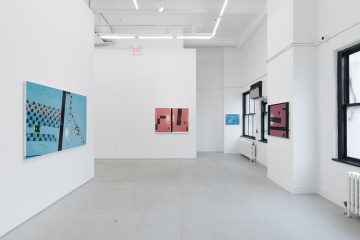 May 13, 2022 - June 18, 2022
Chapter NY is excited to announce Ancient Gloss, Kelsey Isaacs’ first solo exhibition featuring a new series of paintings. In Ancient Gloss, Isaacs manufactures imagery through a multistep process that begins with collaging rhinestones onto plastic photo album covers. She dramatically lights and photographs these reflective stages before remaking them in oil paint, recasting her mundane source material as fantastical fetish objects. Collaged together and replicated in her work, her subjects create formal relationships and distinct geometric compositions that assume a new identity. In line with art historical trompe l’oeil techniques, Isaacs manipulates representational imagery within a shallow space that both emphasizes and plays within the limitations of a two-dimensional plane. She builds slick surfaces with considerable attention to detail while allowing subtle imperfections to reveal the painting’s own materiality, visually recording its own history as an object. Her forms draw the viewer in, but, upon closer viewing, traces of the artist’s hand unravel the artifice of their creation. Isaacs develops each painting sequentially, using repetition to push her subject matter through multiple controlled iterations. With subtle cropping shifts and lighting variations, she disorients their perspective, pushing her works closer towards abstraction. Through these multiple interventions, the paintings become removed from their original sources and take on a logic of their own. In pink&black6, the surface of a garishly pink album cover reflects a hazy portrait of the artist and a friend as they stage and photograph the album in her studio. Isaacs collapses the gleaming reflection of background lights and glittering rhinestones onto a glossy painted surface, rendering reflection within a reflective painted surface. The result is irresistibly, and unsettlingly, alluring. Kelsey Isaacs (b. 1994, Los Angeles, CA) lives and works in New York, NY. She received her BFA in painting from the Rhode Island School of Design, Providence, RI in 2016. Her work has been exhibited at Bungalow Earth, New York; Harkawik, New York; and King’s Leap, New York. 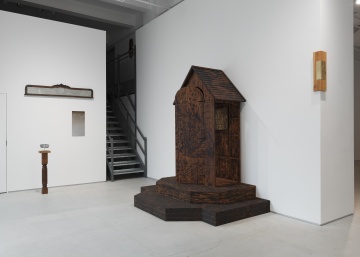 The Temple of Sleep

March 25, 2022 - April 30, 2022
Chapter NY is excited to announce The Temple of Sleep, Cole Lu’s first exhibition with the gallery. Combining literary and historical reference with autobiographical experiences, Lu’s practice builds new mythologies that carry echoes of trauma, transformation and regeneration. Lu questions the theistic concept of creatio ex nihilo (creation out of nothingness), proposing a more complicated interspersal of time and human existence. Presented as a compilation of gestures or a collection of brief anecdotes, Lu’s work unfolds serially, following invented characters through a parallel world of his creation. Each exhibition or body of work reveals another element, broadening his narrative to incorporate new sites and characters. He (re)invents, (re)names, and (re)writes his subjects, composing each work with an elaborate fragmented title – a literary device that further subverts conventional linear narratives and amplifies his poetic vision. 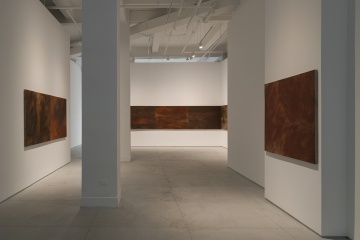 The Solemn and Dignified Burial Befitting My Beloved for All Seasons

March 25, 2022 - April 30, 2022
Chapter NY is excited to present The Solemn and Dignified Burial Befitting My Beloved for All Seasons, Dominique Knowles’ first solo exhibition with the gallery. The exhibition will feature a suite of related and equally scaled paintings throughout the exhibition space. Knowles’ paintings conjure the emotion, shared glances, mutual care, and loss experienced during a lifetime of caring for an animal companion. The immediacy of the paint presents the often rapid transition of death despite a lifetime of labored prevention. Warm ochre tones, pigments that embody the melding of being with soil, harken to memory eternal — like the first visions of animals painted across caves.