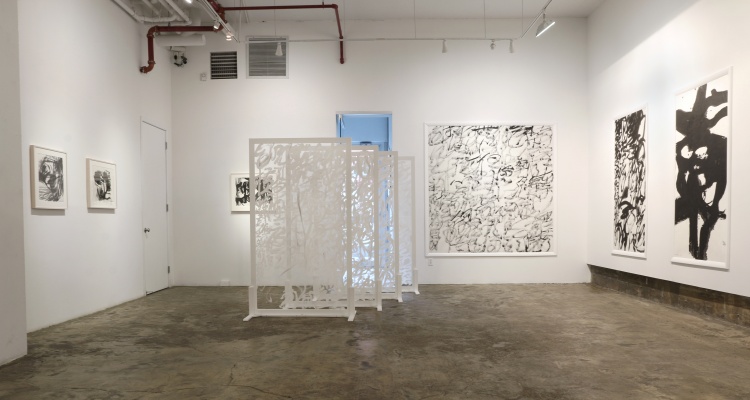 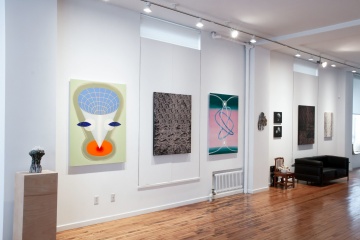 June 15, 2022 - August 26, 2022
In much of today’s world, the accelerating narrative of technology and progress has resulted in an overly narcissistic point of view, where humanity has developed the misguided belief of having control over all things. We ignore the idea of our own insignificance in the greater cosmos and lose the sense of wonder and awe of where we are and what is unknown. This line of thought has led people to settle for a controlled 'one-click away' world, with a desire to continuously optimize and refine technology. The historic changes and upheavals in society due to the recent global pandemic have caused a sense of disorientation, uncertainty, and dislocation of physical and psychological time. The upheaval has exacerbated ongoing imbalances in the global political and economic systems, and has forced many of us to think outside of the established, “technological progress” paradigm once again. The artists in this exhibition seek to pull the lens farther away and humbly look at and explore the hidden, impenetrable, and unexplainable things. From their own carried perspectives, their work reflects upon human existence from a broader dimension of space and time, in an attempt to see where we are and how far we are from everything. Shuyi Cao’s work looks at geological history, examining the traces of biological existence that have been compressed and condensed into the earth’s crust. Her hand-blown clear and colored borosilicate glass pieces (Many-heads, etc.) resemble an aerial view of some unknown topography. With distinctive forms that evoke preconscious memories of primordial microscopic organisms, these fantastical creatures exude a mixed sense of familiarity and estrangement, perhaps recognized from past incarnations of our very biological and geological origin; while simultaneously encoding the clues of future evolution. Precarious Encounter (2021) imagines the interspecies relationship between fungi and its host body, exploring another form of entangled life through contagion and co-becoming.  Antonia Kuo looks at the spontaneous interaction of matter itself, using a photographic process to create chemigrams that blur the boundary between photography and painting. Matter collides with matter in unpredictable ways, much like human encounters. Conventional prints are processed relatively quickly in the darkroom. Chemigrams, by contrast, can be worked on for days or weeks, time enough for Kuo to selectively apply coats of developer, toners, dyes, and fixer to her paper. Perhaps the most remarkable feature of the chemigram process is that the practitioner can rearrange and alter the chemical steps in the service of whatever effect she desires. In Carpet Beetle and Sieve (in mauve), Kuo integrates several processes of image production from different periods (analog, digital, exposure) into one. As she creates the works, seemingly unquantifiable traces of movement of matter, such as light and time, are transformed, recorded, and developed into images. Bouncing between the controllable and the uncontrollable, the manufactured and the mutated, Antonia's works ultimately present images that reveal the delicate balance between man and matter. Furen Dai critiques the institutional art system, examining the essence and positioning of cultural institutions whose role in documenting human culture is crystallized in Western aesthetics and bias. Dai wryly challenges museums and their colonial origins through her fresco works that depict barren museum pedestals. Based on a video piece in which she depicts a dystopian future where humanity has been lost due to a global pandemic, the empty pedestals are revealing in their design - created to elevate the objects they hold, but also stylized in a manner that subtly reinforces the highly categorized and Westernized point of view. At the same time, Dai’s works reference the often-invisible labor of craftspeople who shape museum spaces, and build the platforms and containers that elevate and protect the collection.  Like Dai’s narrative, Tiger Cai also frames his works in an imaginary post-apocalyptic era, but presents his story of the destiny of the human species from a cosmic vantage point, literally set in outer space. The death of his pet goldfish served as the introductory lesson to life and death in his childhood, and thus became an ongoing metaphor for the afterlife in his paintings. As the fish sails into the unknown, Cai zooms out beyond the confines of the Earth, contemplating human existence as a small part of the larger universe. His comets and asteroids that appear to be alive, in stark contrast to the geological forms that inspire Shuyi Cao’s work.  Similarly ‘cosmic’ in nature, Emily Cheng's paintings are charged with conversations about spirituality and the unknown energy of the universe. Her paintings invite introspection more than commentary. She no longer gazes at what is happening in the Anthropocene but instead moves beyond the established framework of "society" and "civilization" to the realm of metaphysical reflection. The geometric patterns and vivid brushstrokes that make up her paintings are suggestive of elemental forces and subject matter: magnetic fields, the body, and religious iconography. Symmetrical, diagrammatic shapes interact with velvety colors and flexible, curved line-work, tapping into what Cheng describes as the "potential of unseen things or unknown force".  All five artists are based in New York, and although their works are highly individual, the manner in which they deal with their chosen subject matter share a similar sentiment. Even before the pandemic brought much of the world to a sudden halt, these artists chose to work from a perspective outside of the common narrative. Now, as the world struggles to return to normalcy, their work serves as a reminder that humanity is only one small part of a greater universe. For more information please contact us at cfa@chambersfineart.com 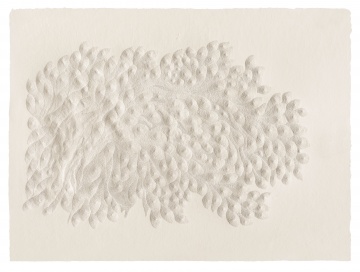 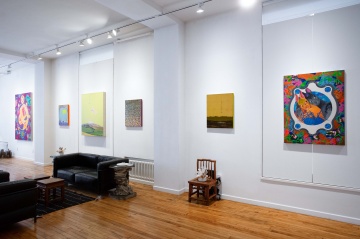 February 3, 2022 - March 25, 2022
Chambers Fine Art is pleased to announce the exhibition Betwixt, featuring artists GAMA and Siyuan Tan on February 3, 2022. This will be GAMA’s fourth exhibition with the gallery, and Siyuan Tan’s first time showing with Chambers Fine Art. The shaman is a mediator between man and all things in nature. Its influence is particularly evident in northern mainland China, with various branches of the tradition existing within ancient Tungusic (Manchu) and Mongolian cultures. Acting as a bridge, the shaman connects man and nature, man and God to each other. Both GAMA and Siyuan Tan use their unique artistic language to reference their own cultural lineage, conceptualizing the spiritual core and external symbols of mythology. Breaking away from a religious interpretation of these symbols, they instead search for new definitions and logical relationships between shamanic culture and the contemporary world from a personal perspective. Born in Inner Mongolia in 1977, GAMA studied at the Central Academy of Fine Arts in Beijing from 1996 to 2000 before moving to Karlsruhe, Germany in 2002 where he studied painting at the Staatliche Akademie der Bildenden Künste from 2002 to 2007 and was master student under Gustav Kluge from 2007 to 2008. He currently lives and works in Berlin. GAMA was born into a nomadic family and would move every four months as the seasons changed. His great aunt was an important shaman whose ability to connect with the supernatural world had a profound impact on the young boy. He recalls witnessing her communicating with the spirit world on many occasions to find out what evil demon had entered her body and caused a particular illness. There were also times when she entered into a trance-like state and animal cries came out of her mouth. Nomadic elements and spatial dislocation are very prominent in GAMA's works. While he now lives and works in Germany, the paintings still reflect his nomadic freewheeling and infinitely curious mindset. In his work, GAMA focuses on creating a three-dimensional space for his characters in the form of oil on canvas. However, he does not use illusionism to confuse the viewer between the painting and the real world; instead, he juxtaposes cultural and visual references, and emphasizes the texture of the work itself. In GAMA’s images, paint is piled up on the edges of irregular shapes as if it would fall off the canvas. In Manöver #2, the vast prairie and mountains are endless, while a massive cluster of mushrooms grows in the middle of the scene. The sky is broken by a simple lamp, presenting a hybrid of interior and exterior spaces; an ‘in-between’ space that appears often in the artist’s work. Born in 1984 in Fuxin, Northeast China, Siyuan Tan graduated from the Lu Xun Academy of Fine Arts with a BFA in sculpture and the Savannah College of Art and Design with an MA in sculpture. He currently works and lives in New York. Fuxin, the hometown where he lived as a child, was once the top energy city in Asia in terms of coal production, and people had to live in the city above ground as well as work in the mines underground. This dichotomy between positive and negative, between above and below in turn inspired his interest in spatial connections, not only physically but also in a spiritual sense. Related to this, the real world and the virtual ‘underworld’ are also important concepts in Siyuan Tan's work. Drawing from his Manchu heritage, he employs a series of elements from Manchu-Tibetan Buddhism and shamanic culture in this recent paintings, such as the unique spatial overlapping relationship found in Thangka paintings, and depictions of the “psychic eye”, connecting the earthly and spiritual realms. In Tan’s painted universe, enchantment coexists with roving tension, underscored by the artist’s kaleidoscopic color palette. In The Way, the Fuxi and Nvwa (the original gods who created humanity according to Chinese legend) are depicted with intertwined snake-like bodies, and are surrounded by Bagua, Taoist diagrams that represent the fundamental principles of reality and seen as a range of eight interrelated concepts. The dynamic equilibrium between yin and yang, masculinity and femininity, and the symmetry of the images make Tan's work appear orderly and disciplined, while elements such as mist and vines interrupt the viewer's vision and imbue the paintings with a kinetic quality. Both GAMA and Siyuan Tan cast aside the restraints of religious ontology research and explore the relationship between shaman culture itself, which is highly symbolic and experimental in nature, and the works of the artists concerned from the perspective of contemporary art practice, although with contrasting results. And yet, upon closer inspection, there is a sense of movement and spatial ambiguity that the works share. When a shaman communicates with the spirit world, they travel between the actual world and the spirit world, and according to GAMA’s aunt, it is as if there are two doors connected by a passageway - this ‘middle space’ separates the world of our reality from the place where our souls reside. It is within this in-between space that both GAMA and Tan’s worlds seem to be situated as well.

Turn of the Century: Photography in China