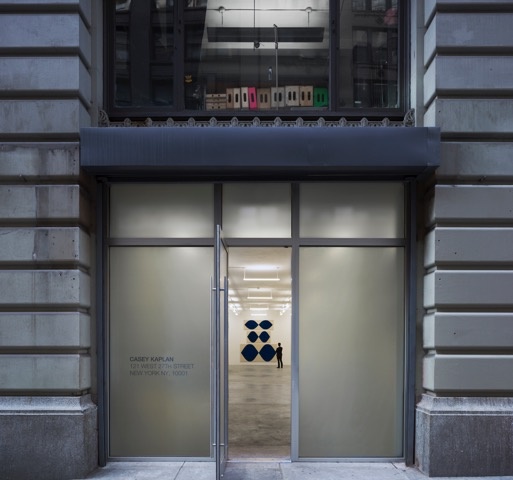 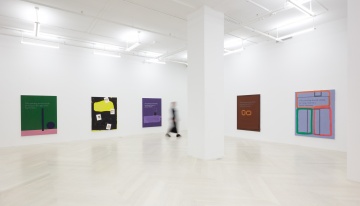 Jonathan Monk: These Paintings Should 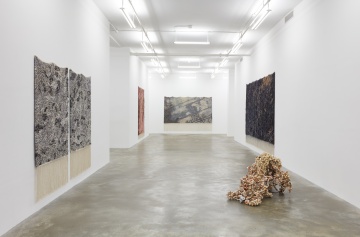 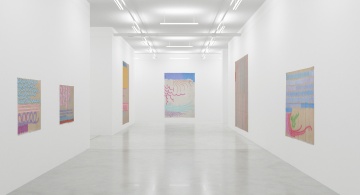 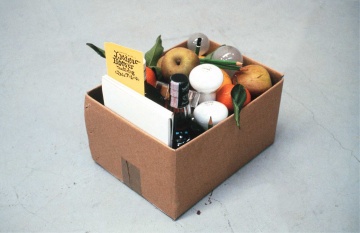 March 3, 2020 - April 25, 2020
Liam Gillick Redaction March 3 - April 25, 2020 However hard you try it’s always tomorrow. And now it’s here again.[1] Casey Kaplan is pleased to announce Liam Gillick: Redaction, the artist’s ninth solo exhibition with the gallery over a two-decade collaboration. The show brings together a selection of key texts, abstract structures and installations, spanning the early 90s to the late 2000s, and will coincide with the gallery’s 25th anniversary. Since the late 1980s, Gillick has employed a variety of methodologies to explore the semiotics of the built world. Writing has maintained a crucial role in his practice, culminating in an eclectic collection of fictional texts that resist linear narrative in favor of fragmented dialogue, stream of consciousness, and abrupt slips in time. In addition to these narrative devices, Gillick often uses historical revisioning as an exercise through which to imagine alternative parallel futures. Continually referenced, decontextualized, and reworked, the texts remain in a permanent state of development and transformation in order to examine shifting modes of production and the psychosocial implications of late capitalism. A selection of Gillick’s earliest writings provide a conceptual framework for this exhibition, including: McNamara (1992-1995), Erasmus is Late (1995), Ibuka! (1995), and Discussion Island/Big Conference Centre (1997). Many of the artworks were produced in relation to specific ideas contained within the texts, encompassing ergonomics, conditions of production, the influence of secondary characters, the aesthetics of both secondary and tertiary sectors, and the disillusionment of utopian projections of the future. Formal abstractions and instructional installations exist as potential props or mis-en-scenes, in loose correlation to the narratives. Rejecting a cause-and-effect logic, the works instead propose a variety of potential scenarios to reflect the nuanced contexts in which abstract ideas are realized. A series of Plexiglas and powder-coated aluminum structures resume the language of renovation and development utilized in the texts. The materials are specifically chosen for these connotations and often embody the formal qualities of secondary architecture. Canopies suspended from the ceiling incite the unconscious congregation of bodies; a free-standing screen provides access visually while blocking physical entry, and ill-placed handrails create arbitrary divisions, but deny stability. Within this non-functional “middle space,” the artworks maintain an elusive and open-ended quality, persistently asking “What If?” while refuting a definitive answer. Acutely self-aware, but without irony or cynicism, the work parodies the perpetual speculation of corporate culture and the desire to preserve an illusion of progress. In face of the increasingly rapid rate at which models of collectivity and resistance are outmaneuvered, co-opted and rebranded within neoliberal societies, Gillick’s work has continued to encourage discourse and collective exchange over three decades of artistic production. Liam Gillick lives in New York. His work has been the subject of numerous solo exhibitions internationally, at institutions such as: Madre Museum, Naples; Kunsthalle Wien, Vienna; Contemporary Art Centre, Vilnius; Serralves Museum of Contemporary Art, Porto; Le Magasin, Grenoble; Hessel Museum of Art, Bard College, New York; Museum of Contemporary Art, Chicago; the Guggenheim Museum, New York and Bilbao; Museum of Modern Art, New York; and Tate, London, among many others. Gillick has participated in documenta, and the Venice, Berlin and Istanbul Biennales - representing Germany in 2009 in Venice. A prolific writer and critic of contemporary art over the last twenty-five years, Gillick has contributed to publications such as Artforum, October, Frieze and e-flux Journal. He is the author of a number of books, including a volume of his selected critical writing and the recently-published Industry and Intelligence: Contemporary Art Since 1820 (Columbia University Press, March 2016). Additionally, Gillick has produced a number of short films since the late 2000s, which address the construction of the creative persona in light of the enduring mutability of the contemporary artist as a cultural figure. High-profile public works include the British Government Home Office (Interior Ministry) building in London and the Lufthansa Headquarters in Frankfurt. His work can be found in institutional collections such as Centre Pompidou, Paris; Solomon R. Guggenheim Museum, New York and Bilbao; Museum of Modern Art, New York; Tate, London; and Serralves Museum of Contemporary Art, Porto. ___________________________________________________ [1] Liam Gillick, Big Conference Centre, 1997 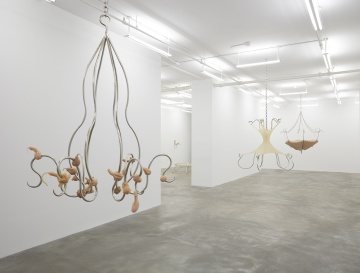 January 23, 2020 - February 29, 2020
Casey Kaplan is pleased to announce Hannah Levy “Pendulous Picnic,” the artist’s first solo exhibition with the gallery. Levy’s sculpture both incite and repel touch. By manipulating texturally incongruous materials such as silicone and steel, Levy produces tactile structures that arouse an acute bodily awareness. Her references are broad: medical equipment, hardware, prosthetics, vegetables, and furniture are anthropomorphized through welded curves and cast appendages that relate to the human form. The scale of recognizable, everyday objects is often distorted to the point of absurdity, resulting in uncanny configurations that have lost their original function. Expanding upon the visual language of artists such as Eva Hesse, Louise Bourgeois and Meret Oppenheim, Levy’s sculptures are defined by their materiality and bodily consciousness. For this exhibition, Levy presents a series of new works formally inspired by domestic décor and objects of recreation. Through these referents, her sculptures engage the aspirations and insecurities embedded within our designed environments. All of the works contain competing dualities - erotic and sterile, seductive and repulsive, humorous and disconcerting - to subvert the concept of “tastemaking” perpetuated by interior and industrial design. In the main entryway gallery, three large-scale works hang from the ceiling on thick, metal chains. The elaborate sculptures recall distorted chandeliers – once symbols of wealth and nobility, that have since devolved into cheaply-produced and often gaudy commodities. In Levy’s adaptation, the metal sculptures are shaped by exaggerated, sensual curves and adorned with flesh-like silicone, reflecting a perverse eroticism often hidden in modern design. Oversized and presented low to the ground, the sculptures confront the viewer with their own physicality and elicit a corporeal discomfort through both tactile and formal means. One work is furnished with a series of alarmingly sharp hooks, indulgently pierced with over a dozen silicone cast gourds. Another holds a large, silicone pool inflatable with distinguished air valves that take on suggestive connotations at this exaggerated scale. While amusing, the works’ humor is bellied by a latent anxiety that permeates throughout the exhibition. In contrast to the extravagance of the chandeliers, a series of modestly-scaled fixtures, recalling light sconces, line the walls of the gallery. Each metal armature is welded into a curved point and holds a cast asparagus in lieu of a candle or lamp. The plump, tactile silicone is pigmented in anemic shades of beige, accentuating a homogeneous, flesh-like quality. Enlarged several times over, the asparagus rests languidly over the nickel plated steel - limp and phallic. On the floor lays a large, free-standing sculpture, embellished with menacing metal springs and taught, stretched silicone. The structure appears familiar, but the scale remains awkwardly undetermined – smaller than an outdoor trampoline, but larger than indoor rehabilitation equipment. Levy transitions into a two-dimensional plane within the remaining gallery space, engaging recurrent themes through different means. In this room, a photograph portrays a manicured set of hands baiting a fishhook with a live worm. Recreational fishing is a pastime with both blue-collar and aristocratic affiliation. In contrast with this subject matter, the sleek, commercial aesthetic of the photograph suggests the very notion of gratuitous leisure might be illusory. The haptic focus of the image intensifies the tactility which binds all of the works in the exhibition and acknowledges the persistent desire to touch in an increasingly virtual world. All of the works in the show conflate flesh and steel, encapsulating the bodily integration of the once external machine. With a keen material sensibility, Levy’s sculptures reflect the internalization of our built and bought environments. Each component exists with the potential to be consumed, in a perverse metabolic cycle that questions the very nature of consumption - both biologic and cultural. Levy (b. 1991, New York) received her MFA from Städelschule, Frankfurtin 2015. She has held recent solo exhibitions at Fondazione Coppola, Vicenza, Italy (2020); C L E A R I N G, New York (2018), Mother’s Tankstation, Dublin (2018); Fourteen30 Contemporary, Portland (2017); White Flag Projects, St. Louis (2016) and Galerie Parisa Kind, Frankfurt (2015). Additionally, her work has been exhibited at museums internationally, including: G2 Kunsthalle, Leipzig, Germany; Yuz Museum, Shanghai; Louisiana Museum of Modern Art, Denmark; Museum of Modern Art, Humlebæk; MoMA PS1, New York; the Frankfurter Kunstverein, Frankfurt; SCAD Museum of Art, Savannah; Palais de Tokyo, Paris; Lever House, New York and Museum Für Moderne Kunst, Frankfurt. In May of this year, Levy will unveil a major new public work, commissioned by High Line Art and Friends of the High Line, New York and on view through March 2021.

Betrayals of and by the Body

hand in hand with the handless