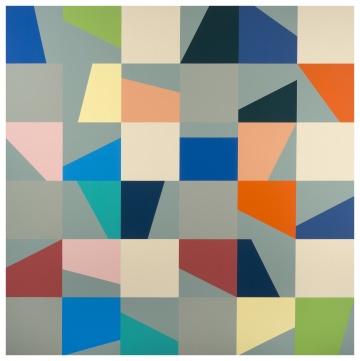 Berggruen Gallery is pleased to present Contemporary Paintings, an extensive exploration of light, color, and composition through the medium of paint.From an exquisite example of Sean Scully’s Wall of Light series to the colorful environments of local, Bay Area painters Muzae Sesay and Jenny Sharaf, Contemporary Paintings abounds with saturated hues, graphic geometries, and varying techniques. Whether it be whimsical abstraction or meticulous realism, the paintings juxtapose one another to open dialogues regarding how artists render their surrounding world. The exhibition inaugurates the gallery’s reopening and summer programming, reflecting Berggruen Gallery's ongoing dedication to presenting exhibitions that bring together works from the contemporary canon and of historical significance. Furthermore, the show features a dynamic and diverse group of artists from several different countries, from the United States to South Korea to the United Kingdom. 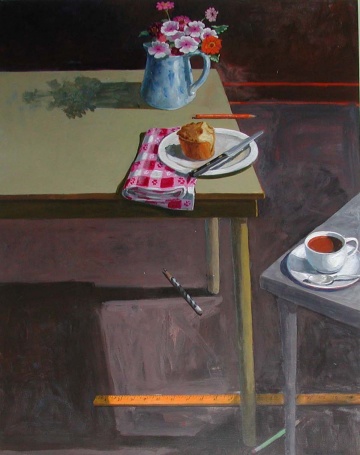 April 28, 2022 - June 4, 2022
Paul Wonner was a distinguished American painter who keenly explored the fluidity between abstraction and realism throughout his spanning career. This exhibition highlights his still-life paintings and brings together large-scale works from various private California collections. This assemblage of twenty paintings, dating between 1977 and 2000, distinctively marks a pivotal bend in Wonner’s career: the artist’s illustrious turn towards Abstract Realism and his acclaimed landscapes of objects. 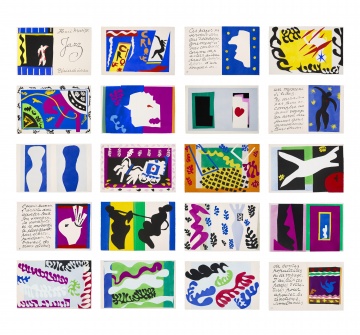 Drawing with Scissors: Contemporary Works in Conversation with Matisse's Jazz 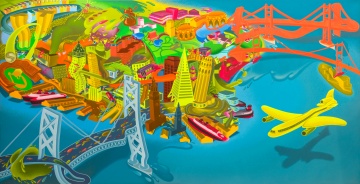 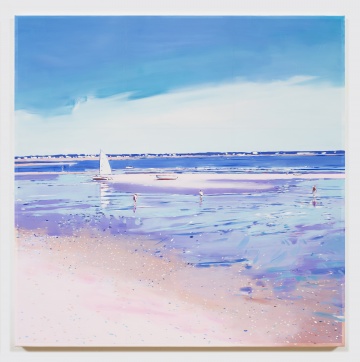 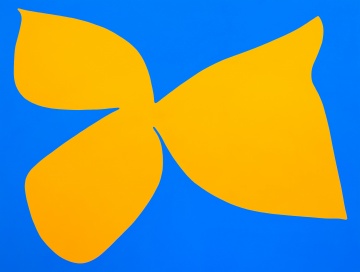 September 10, 2021 - October 9, 2021
Berggruen Gallery is pleased to present Paul Kremer / UV, an exhibition of recent paintings and works on paper by American painter, Paul Kremer. This show marks Kremer's second solo exhibition with the gallery. The show will be on view from September 9 through October 9, 2021. 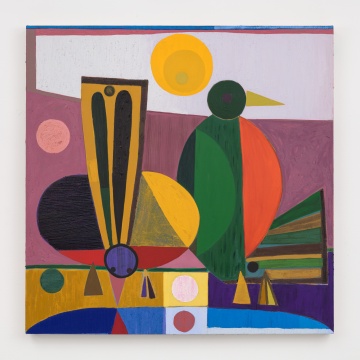 A Place for Dreams

July 8, 2021 - August 19, 2021
Berggruen Gallery is pleased to present Austin Eddy: A Place For Dreams, an exhibition of recent paintings by Brooklyn-based artist Austin Eddy. This show marks Eddy’s first solo exhibition with the gallery. Austin Eddy explores the formal concerns of shape, light, color, and collage while embracing the complex and broad spectrum of human emotion in his semi-autobiographical paintings. The artist created this new body of work as stringent quarantine orders began to lift and the world drastically changed once more. The sentiments bound up in Eddy’s vivid paintings reflect this unfamiliar time…from solitude and anxiety to romance and harmony to tension and tragedy. Birds, which sprawl across each of the artist’s canvases, are the driving subject matter and motif for these conflicting sensations. Eddy presents his birds as a way to understand the strain engrossed in the human experience—whether we are caged, soaring through the sky, or something in between. 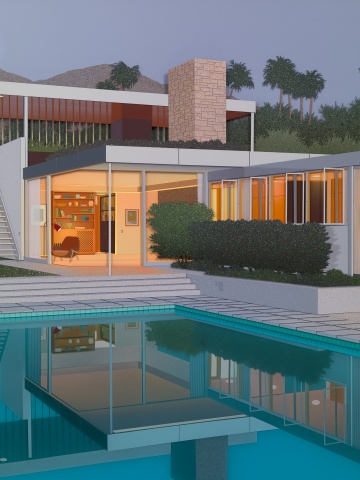 May 20, 2021 - July 3, 2021
Berggruen Gallery is pleased to present Lucy Williams: MOSAIC, an exhibition of recent mixed media bas-relief collages by British artist Lucy Williams. This show marks Williams’s second solo exhibition with the gallery and will be on view May 20 through July 3, 2021. 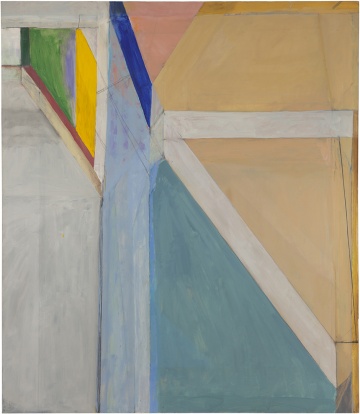 February 18, 2021 - April 3, 2021
Berggruen Gallery is proud to present Richard Diebenkorn: Paintings and Works on Paper 1948-1992, a sweeping exhibition of the artist’s most evocative works from the height of his career. 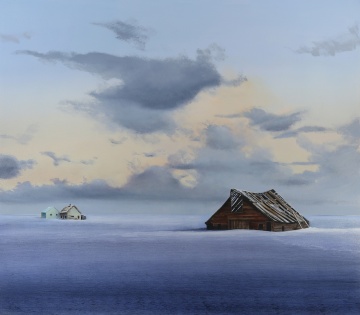 The Best Days Are the First to Flee

January 14, 2021 - February 13, 2021
Michael Gregory’s most recent body of work presents a series of new oil paintings that render the vast, captivating, and almost ineffable beauty of the American landscape—a subject matter that has always fascinated the artist. Gregory writes, “America has always been an idea, a construct of our imagination, and our imagination has outdistanced even its vast boundaries and empty places. The American West has provided us a rich metaphor for a discussion of our hopes, aspirations and failures. It is the subject of literature, poetry, and song—part of our American common language.” Gregory’s landscapes, rich in detail, continue to expand this great American metaphor. 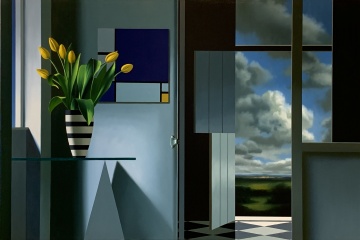 December 3, 2020 - January 9, 2021
Berggruen Gallery is pleased to present an exhibition of new paintings by Santa Monica based artist, Bruce Cohen. 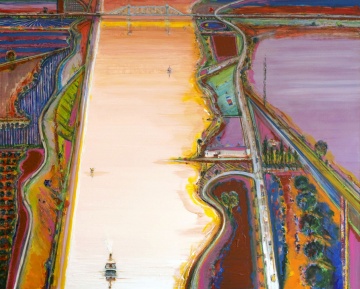 October 16, 2020 - November 28, 2020
Berggruen Gallery is pleased to present an exhibition of paintings and works on paper by Wayne Thiebaud to coincide with the artist's 100th birthday and the 50th anniversary of the gallery. 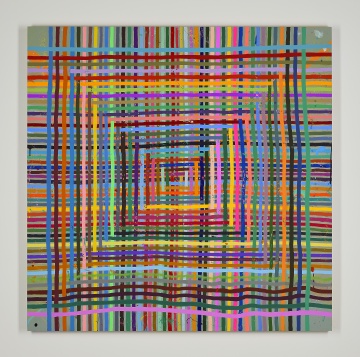 September 3, 2020 - October 10, 2020
Berggruen Gallery is pleased to present an exhibition of new paintings and works on paper by Alicia McCarthy. McCarthy is considered an integral member of the Mission School, a group of young San Francisco artists who were associated with the San Francisco Art Institute (SFAI) and who worked in and around the Mission District in the early 1990s. Working at the intersection of craft/folk art and urban street and graffiti culture, this core group of artists cultivated an artistic practice that prized the handmade and the local in an increasingly technologized society. 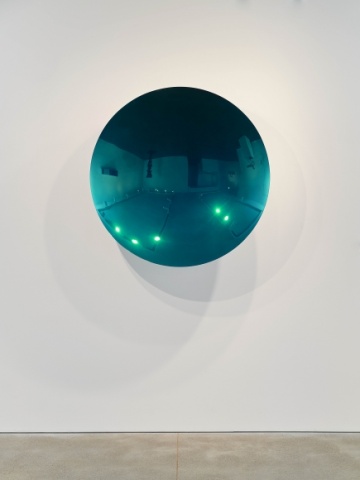 July 27, 2020 - October 10, 2020
Berggruen Gallery is pleased to present OBJECTively Speaking: Contemporary Sculpture, a powerful survey of forms that transcend notions of material, line, volume, and balance. We are also excited to announce the introduction of Berggruen Gallery 3D viewing experiences, a new feature that we are inaugurating with our current OBJECTively Speaking: Contemporary Sculpture exhibition. OBJECTively Speaking brings together distinct processes from a dynamic range of artists while simultaneously meditating on the Minimalist art movement. The artists present in this showing have all worked to both continue and disrupt notions of sculpture as we understand it, even having influenced one another’s work in real-time. While Joel Shapiro’s geometric abstractions speak to Donald Judd’s unadorned objects, Anish Kapoor’s exploration of reflectivity acknowledges Joseph Kosuth’s unique use of light and medium 45 years prior. Examining the influence of Minimalist, Installation, Abstract, and Conceptual sculpture in the 20th and 21st centuries, OBJECTively Speaking presents a complex yet complimentary selection of works. 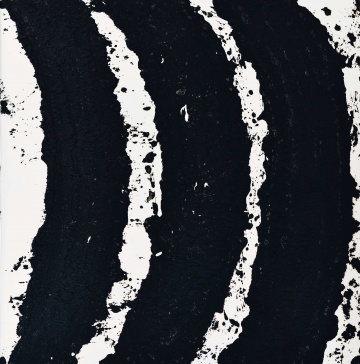 February 20, 2020 - April 4, 2020
Berggruen Gallery is pleased to present Richard Serra: Works on Paper, an exhibition of works on paper and mylar, oil stick drawings, and etchings. Richard Serra says about his drawing “Drawing gives me an immediate return for my effort and the result is commensurate with my involvement. It is an activity that requires solitude, it is the most concentrated space in which I work.” Throughout his career, Serra has made drawings as separate, immediate, and fundamental lines of investigation to his sculptures. They are explorations in their own right, integral to the overall concerns of his sculptural practice, and unique intuitive explorations within their own established criteria. Using black paintstick or oilstick, heated to a viscous and sometimes fluid state, he creates elemental forms through direction action on the paper and the accretion of medium. Serra has also reinvigorated the traditional etching medium, using deeply bitten plates to create expressive gestural forms. "Tracks #2," 2007, paintstick on handmade paper, 41 7/8 x 41 7/8 inches. 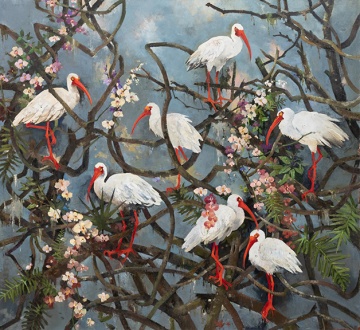 January 9, 2020 - February 15, 2020
John Alexander: Landscape and Memory is comprised of nine paintings and four drawings, work that comes together in reverence for the formal tradition of landscape painting. Paying homage to an Impressionist Master, Claude Monet, Alexander paints dreamy hollyhocks. Invoking the more recent Hudson River School, Alexander carefully creates bucolic scenes of both reality and idealization. Perhaps most unexpectedly, Alexander also nods to the Abstract Expressionists, applying thick strokes of paint in a gestural, emotional meditation. In turn, Alexander’s work pays tribute to the long and varied legacy of landscape painting before him while simultaneously remaining true to his own, very personal, connection to nature. Through the amalgamation of art historical context, environmental conservation, and the integration of a more intimate narrative, Alexander produces a body of work that is raw, compelling, and perhaps above all else, natural. Image: "Ibis and Wonderland," 2019,oil on canvas, 64 x 70 inches. 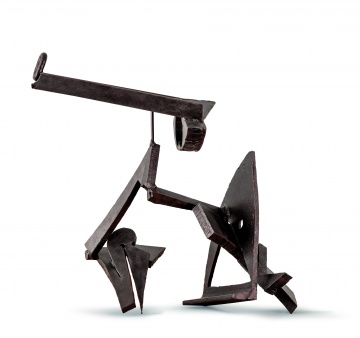 January 9, 2020 - February 15, 2020
Spanning five decades of the artist’s career, the work comprising Mark di Suvero: Sculpture offers unique insight into the evolution of di Suvero’s artistic practice. Among the early works in the exhibition are Untitled (1975) and Mayakovsky (1976), both exquisite examples of di Suvero’s reconciliation between daring construction and expressive, organic forms. Advancing to the present day, di Suvero creates work he calls ‘puzzle pieces,’ – intricate structures composed of many different individual parts which have the ability to construct several different configurations within themselves. Most recently, the artist preserves the quintessential properties of his early works whilst demonstrating further complexity and play in additional mediums. Image: "Ibu," 1991, steel, 31 1/2 x 33 x 19 inches

Some Mornings Catch a Wraith

Together, Forever, For Now